Home Archives Contact Us Subscribe Twitter MeWe Facebook Patently Mobile
While Apple Banned Facebook for using a Tech Tool improperly to track Teen Habits, Google Could be next
While Apple may Gain a Third Camera for Premium iPhones in 2019, we'll have to wait until 2020 for a Next-Gen 3D Camera

IDC Reports on Global Smartphone Shipment for Q4 2018, Capping off the Worst Year Ever 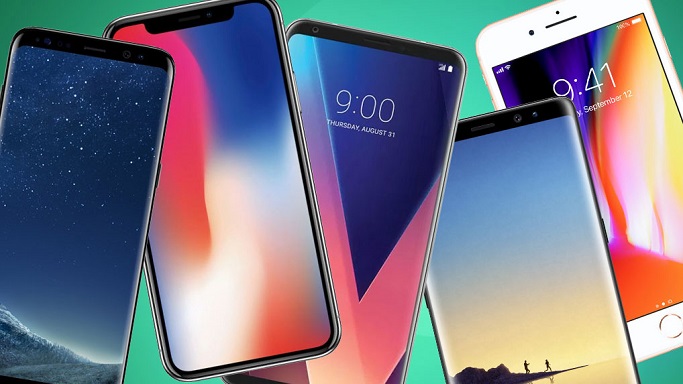 IDC's latest global smartphone report was published today wherein they noted that  smartphone vendors shipped a total of 375.4 million units during the fourth quarter of 2018 (4Q18), down 4.9% year over year and the fifth consecutive quarter of decline.

The challenging holiday quarter closed out the worst year ever for smartphone shipments with global smartphone volumes declining 4.1% in 2018 with a total of 1.4 billion units shipped for the full year.

With challenging market conditions continuing into the first quarter of 2019, the likelihood of a declining market this year becomes more of a reality. 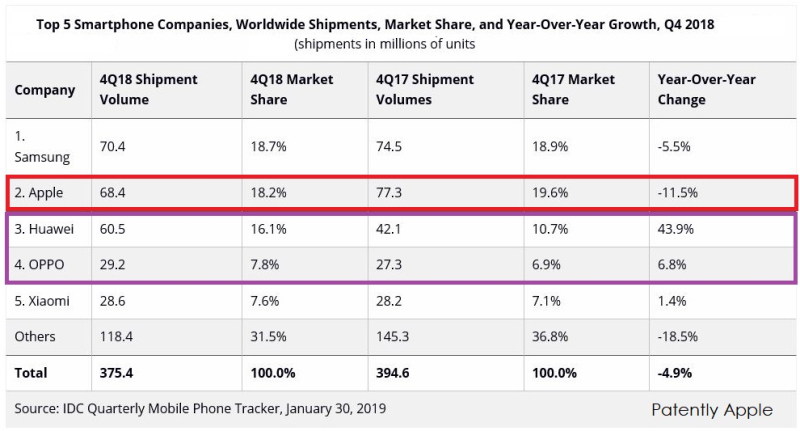 IDC highlighted Apple by stating that Apple saw iPhone volumes drop 11.5% in 4Q18 marking one of the more challenging iPhone quarters in terms of growth, despite the three new models. Total iPhone volumes were down 3.2% for the full year, which is understandable considering its two largest markets (the United States and China) both experienced the worst year for smartphone performance ever.

Apple is certainly not out of the game, but the likelihood of not having a 5G iPhone in 2019 means it will need to tell a strong iPhone and, more importantly, ecosystem story to succeed. If anyone can do it, it is Apple. But it certainly won't be easy when faced with all the other downward market pressures."

As the IDC chart shows above, Apple's decline for the Quarter was the worst of all Smartphone players in Q4 with -11.5% while China's Huawei and Oppo delivered the best growth for Q4. Huawei's growth was stellar at +43.9%, though it has to be acknowledged that Huawei's shipment growth was hamstrung by not being able to enter the U.S. market.

IDC's Ryan Reith, program vice president with IDC's Worldwide Mobile Device Trackers stated that "Globally the smartphone market is a mess right now. Outside of a handful of high-growth markets like India, Indonesia, Korea, and Vietnam, we did not see a lot of positive activity in 2018.

Despite all the challenges the smartphone market is facing, the largest focal point remains the China market as recovery continues to get pushed further forward. China, which accounts for roughly 30% of the world's smartphone consumption, had an even worse 2018 than the previous year with volumes down just over 10%. High inventory continues to be a challenge across the market as is consumer spending on devices, which has been down overall.

On a worldwide basis, the top 5 smartphone companies continue to get stronger and now account for 69% of smartphone volume, up from 63% a year ago. If vivo is included, which is currently number six and has been in and out of the top 5 in recent quarters, the share of the top companies is 75% and growing. While the market faces some very serious challenges in general, none are greater than the challenges facing the brands that continue to lose market share and channel positioning.

The arrival of both 5G and foldable devices later this year could bring new life to the industry depending on how vendors and carriers market the real-life benefits of these technologies."

As for Samsung, they saw smartphone volumes decline 5.5% in 4Q18 with total shipments of 70.4 million units. While this was enough to maintain the top position for the quarter, its share once again fell below 20% to 18.7%, just a few points above Apple and Huawei. Things weren't much better for the full year as 2018 volumes were down 8% to 292.3 million. With a barrage of 5G smartphones right around the corner, it will be interesting to see if Samsung has enough in the tank to weather the competitive environment and maintain the top spot in the market.

As for Huawei, they continued to capitalize on strong momentum in some markets with 4Q18 volumes up 43.9% year over year and 2018 volumes up an impressive 33.6%. Huawei continues to see growing success from its Honor line of devices, which are now representing close to half of its overall volume. China represents about half of Huawei's smartphone business, but that is dropping as the company continues its international success with growth in almost every international market where they participated in 2018.

As always, it must be acknowledged that "volume of shipments" is one of the worst methods of tracking any company's smartphone value. Profit wise it's likely that Apple's top competitors combined couldn't even begin to scratch the profits made by Apple in the quarter, even with shipments being down. While that wouldn't make for an interesting IDC report, it's the reality of the day.