Home Archives Contact Us Subscribe Twitter Facebook Patently Mobile
One of Apple's Next Health Sensors for iDevices could save your Life by Detecting Invisible Deadly Gases
According to the First Analytical Report on US iPhone Sales for Apple's Q1 2019, the iPhone XR was the Runaway Winner 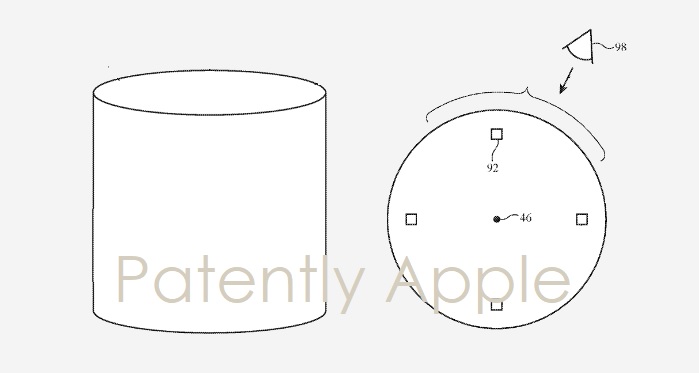 Today the US Patent & Trademark Office published a patent application from Apple that provides us with a peek at what could be coming to future versions of HomePod. While Apple could deliver these ideas in a single major upgrade, I suspect that Apple will have these features trickle out over several years.

Apple's Patent Claims are the most important part of an invention and it's here where they cement their #1 hot feature 3D hand gesturing (or In-Air gesturing).

A future HomePod may use a more intelligent mesh that's made of smart fabric in contrast to today's standard fabric mesh.

Apple's patent FIG. 8 below is a perspective view of a fabric layer with openings in which light-emitting devices have been formed; FIG. 9 is a side view of an illustrative electronic device that is displaying content for a viewer. 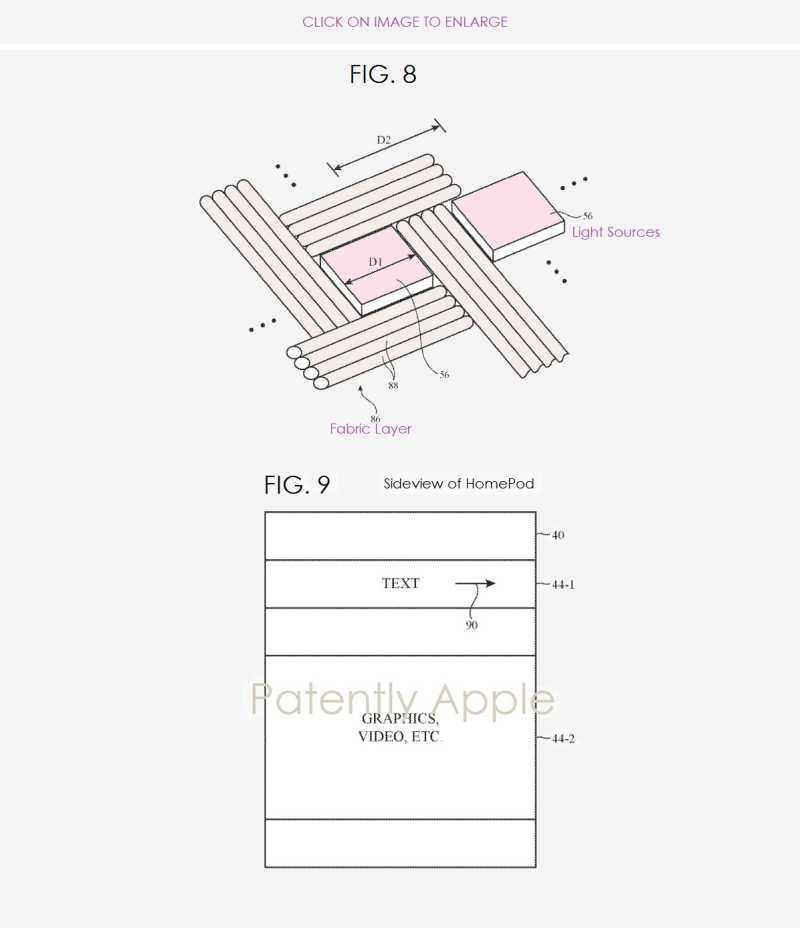 Earlier today Patently Apple posted a report titled "One of Apple's Next Health Sensors for iDevices could save your Life by Detecting Invisible Deadly Gases." The patent covered a miniature gas sensor built-into future iDevices.

In this particular patent about a future HomePod, Apple once again describes possible health sensors that are being considered that include: "gas pressure sensors, carbon dioxide sensors and/or sensors measuring other gas concentrations.

In respect to a camera on HomePod, Apple notes that during operations, camera information may be gathered (e.g., by capturing images with one or more cameras to detect faces of individuals surrounding HomePod.

Apple's patent FIG. 10 below is a top view of HomePod showing how different content may be displayed simultaneously on difference sides of the device for different respective viewers; FIG. 11 is a flow chart of illustrative operations involved in operating an electronic device that includes a camera or cameras. 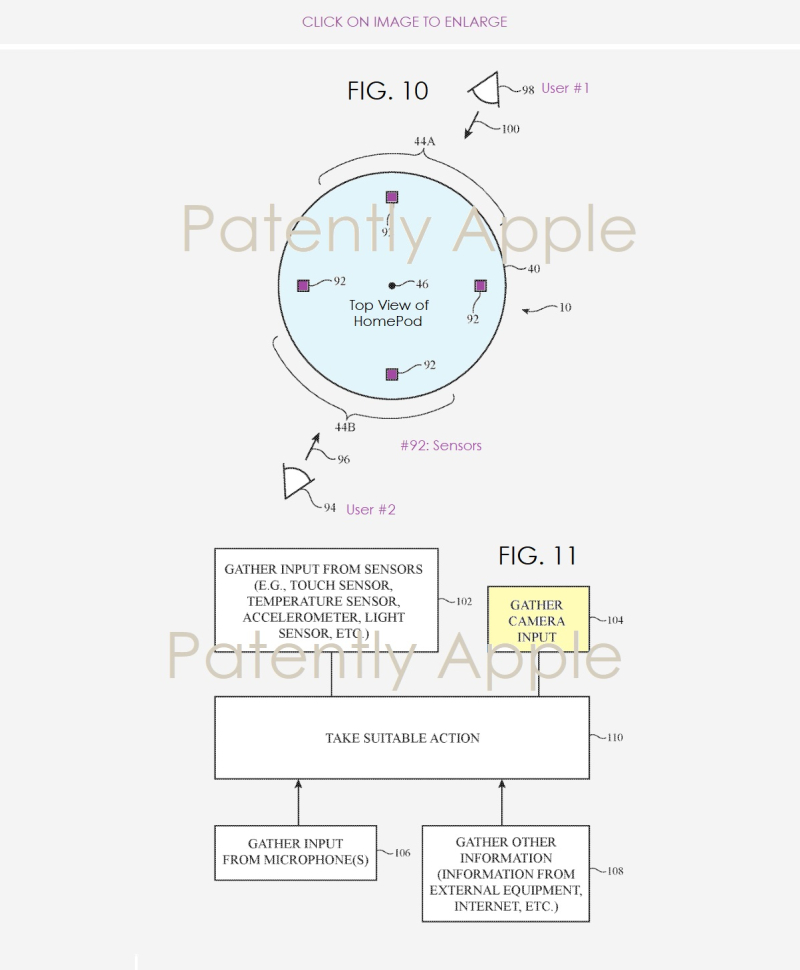 Further, Apple points to sensors that gather hand gestures and other three-dimensional gesture input (e.g., using optical sensing, capacitive sensing, etc.), etc. Audio and/or video feedback may be presented as sensors gather user input. For example, detected hand gestures can be accompanied by audible clicks and/or variations in light output that serve as feedback informing a user that the hand gestures have been successfully detected by the device (HomePod Apple or other devices.

According to Apple, HomePod may analyze a user's voice (e.g., when a user is supplying voice commands such as database queries and/or other commands.) If vocal stress is detected in captured voice information, HomePod may make adjustments to content being presented to the user. For example, if voice loudness or stress patterns indicate that a user is stressed, the color and/or brightness of a lighting pattern on a visual output device in HomePod may be adjusted accordingly (e.g., to reflect elevated stress or to try to alleviate stress by creating a calming environment).

In arrangements in which HomePod is displaying an avatar representing a digital assistant, the avatar (e.g., a humanistic avatar, a simplified graphical representation of a digital assistant such as an emoji-based avatar, etc.) may be adapted depending on the user's mood. If, for example, sadness is detected in the user's voice, the avatar may change accordingly (e.g., to a sad emoji to represent user sadness or to a happy emoji to counteract the detected sadness).

The avatar can also be changed depending on the nature of content currently being presented to a user. If, for example, a user asks a digital assistant for information on purchasing a birthday gift, the digital assistant may use a happy emoji to present results.

Elsewhere in the patent filing Apple notes that the content displayed on displays may include a text transcription of currently spoken voice commands or other voice input. This may help provide a user with visual feedback during voice interactions with HomePod. Text may be scrolled vertically and/or horizontally, may be displayed on a side of device facing a user and/or facing away from a nearby wall or other external obstruction, etc. Additional visual feedback may be provided in the form of an animated assistant.

Apple's patent application was filed back in Q4 2017. Our cover graphic includes a combination of patent figures 1 & 10. Considering that this is a patent application, the timing of such a product to market is unknown at this time.