Home Archives Contact Us Subscribe Twitter Facebook Patently Mobile
The FTC vs Qualcomm Trial began on Friday with Huawei as Star Witness, with more Fireworks to Follow in the days ahead
WiLAN's $145.1 Million Verdict against Apple has been slashed to $10 Million While Unified Patents Challenges more Patent Troll Patents 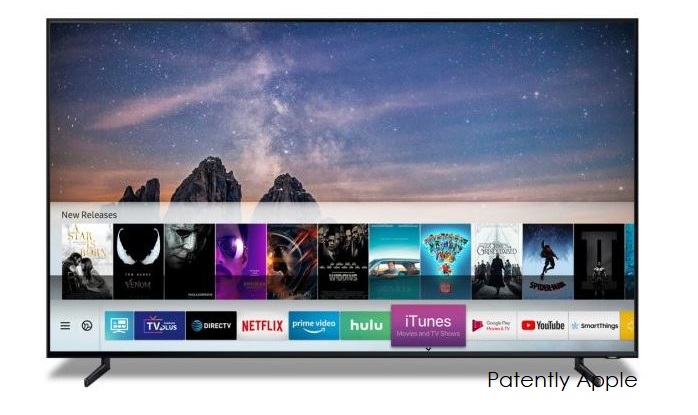 Samsung surprised the market today with the announcement that they'll be offering iTunes Movies and TV Shows while offering AirPlay 2 on 2019 Samsung Smart TV models that launch this spring. Clearly Apple is gearing up its new content service and getting their service listed on Samsung's bottom bar services bar as presented above is an excellent way to help kick off Apple's content service rumored to be debuting in 2019.

With the new iTunes Movies and TV Shows app on Samsung Smart TVs, Samsung customers can access their existing iTunes library and browse the iTunes Store to buy or rent from a selection of hundreds of thousands of movies and TV episodes — including the largest selection of 4K HDR movies. iTunes Movies and TV Shows will work seamlessly with Samsung’s Smart TV Services, such as Universal Guide, the New Bixby and Search, to create a consistent experience across Samsung’s platform.

With AirPlay 2 support, Samsung customers will be able to effortlessly play videos, photos, music, podcasts and more from Apple devices directly to Samsung Smart TVs, including QLED 4K and 8K TVs, The Frame and Serif lifestyle TVs, as well as other Samsung UHD and HD models.

Won-Jin Lee, Executive Vice President, Service Business of Visual Display at Samsung Electronics: "We pride ourselves on working with top industry leaders to deliver the widest range of content services to our Smart TV platform. Bringing more content, value and open platform functionality to Samsung TV owners and Apple customers through iTunes and AirPlay is ideal for everyone."

Eddy Cue, senior vice president of Internet Software and Services at Apple: "We look forward to bringing the iTunes and AirPlay 2 experience to even more customers around the world through Samsung Smart TVs, so iPhone, iPad and Mac users have yet another way to enjoy all their favorite content on the biggest screen in their home."

Report Update for AirPlay 2: The day after Samsung's big announcement, it was revealed today (Monday) that both LG and Vizio will also be adding support for Apple's AirPlay and HomeKit.

Other interesting announcements beginning to leak out prior to the CES 2019 event kick starting on Tuesday include:

HP Breaks new Ground with a 15" AMOLED Display: It was only a matter of time before notebooks got a little attention over smartphones. While Apple made the switch to OLED beginning last year with iPhone X, HP is the one that will finally be bringing quality AMOLED displays to notebooks starting with their Spectre X360.

With support for HDR, the Spectre x360 15 delivers 33 percent more colors than sRGB and has a stellar 100,000:1 contrast ratio. All that will come in a new Spectre x360 body unveiled recently by HP with a dual-chamfered design for easier opening, a privacy kill switch on the webcam and very narrow bezels. More on this.

When Huawei drove trucks with ads plastered on it promoting their new coming smartphone in front of UK Apple stores I found it to be like a teenage prank. Huawei also heavily promoted their smartphones with massive ads around Apple's construction site in Milan Italy.

Apple never had a presence at the annual CES event, so it's an oddity for Apple to stick their iPhone message in the face of their competitors like Google. 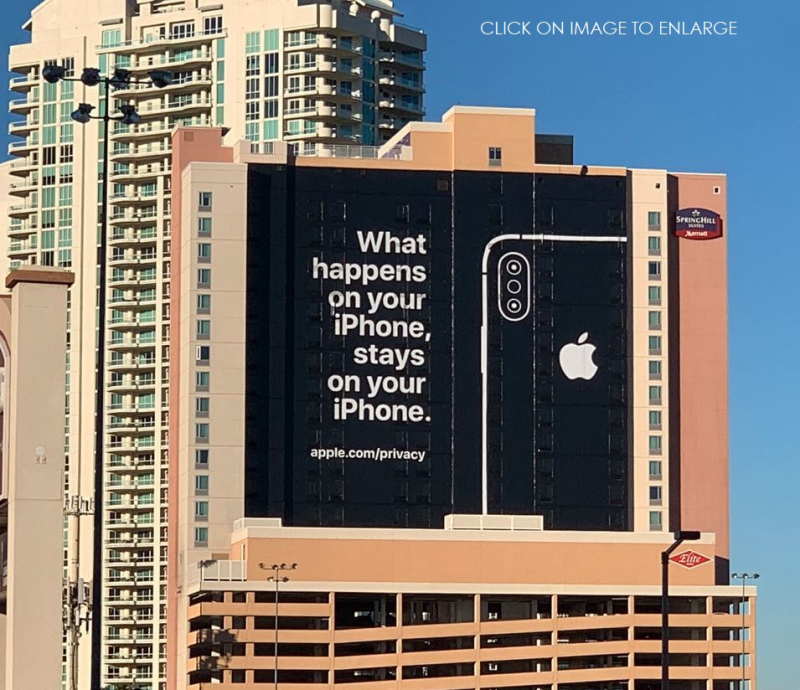 Apple's CEO Tim Cook took aim at Google and Facebook over 'weaponized data' back in late October. The banner may be a follow-up to Apple's ongoing message on privacy that lashes out at social media companies.