This week Vlogger Marques Brownlee provided his fans with a video of a first-person perspective of what it's like to sit in the backseat of a driverless cab (by Russian technology company Yandex). The autonomous vehicle uses an iPad Pro to show riders how the car is analyzing the road in realtime and as far as 250 meters ahead in every direction. While the video would have been much cooler if the cab in action was that of an Apple based Project Titan vehicle, but Apple doesn't promote "future" products of any kind. 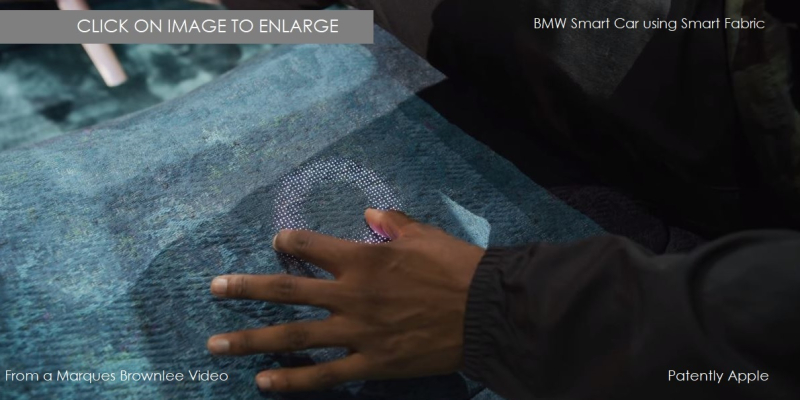 I took a screenshot from the Brownlee video above where he was talking about seeing a concept car at CES last week from BMW that integrated smart fabric into the arm rest area of a vehicle.

The screenshot shows Brownlee using a pinch and zoom gesture on the fabric that provides visual feedback. Finally seeing such a concept that Apple has listed in their patents is interesting to see play out in the real world.

I thought that it would help patent fans to see this feature in action to make the idea more tangible when reading past or future smart fabric patent reports.