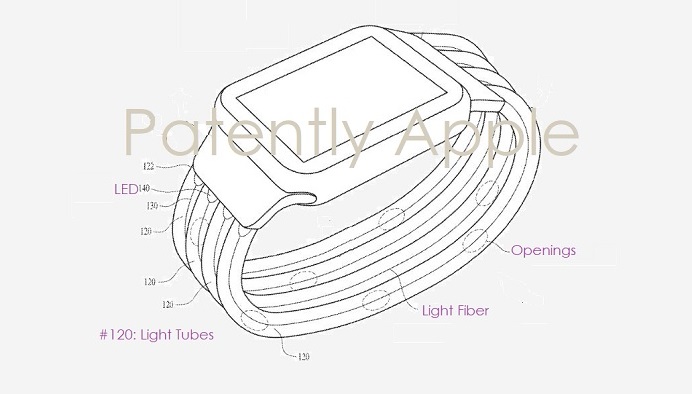 The U.S. Patent and Trademark Office officially published a series of 48 newly granted patents for Apple Inc. today. In this particular report we cover a single granted patent relating to a possible future Apple Watch band that glows with customized colors. More importantly for women, it'll be possible to snap a photo of the main color that they're wearing that day with their iPhone and use a new app to transmit the chosen color to the Apple watch band to customize the band for that day.

More specifically, a future Apple Watch band may include multiple light-tube assemblies. The light-tube assemblies may include a light tube, a light fiber within each light tube that extends the length of the light tube, and at least one light-emitting diode (LED) for providing light in each light tube. The LED may produce a wide color gamut for the light fiber to produce light. Each LED may produce light characteristics different from the other LEDs in the watch band. Alternatively, all LEDs may produce the same light characteristics. The light tubes may double as both the structure for attaching a watch body to a user's wrist and a carrier of light to add variety and style to the watch band. Watch bands as described may have a variety of different attachment mechanisms for attaching and securing the watch body to the user's wrist. 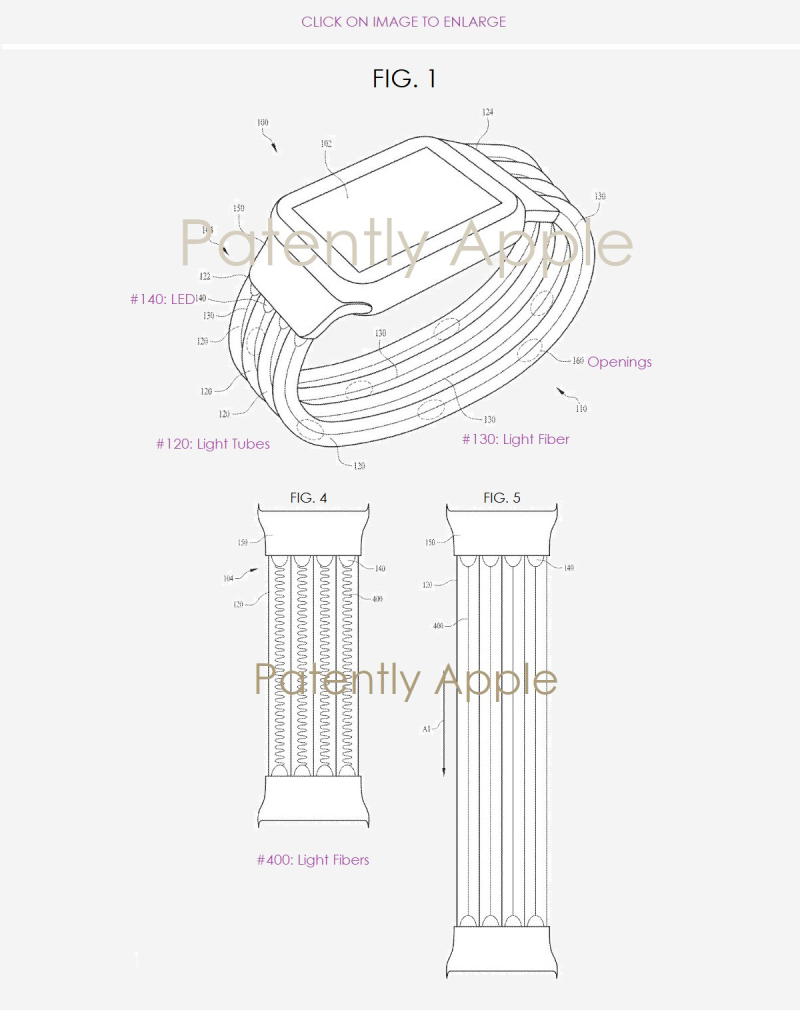 Apple's patent FIG. 9 shows a diagram of electrical components of a watch band; FIG. 10 shows an iPhone capturing an image to select a color of the watch band. The band may further include a variety of different sensors (#930), such as, for example, light sensors, sound sensors, motion sensors (e.g., accelerometers, gyroscopes, etc.), heath sensors, biometric sensors and the like.

The proposed Apple Watch band may further include a camera (#940). Alternatively the camera could be on the iPhone.

Apple further describes the iPhone having an app that could enable the user to capture color images with a camera on the iPhone to set the light characteristics of each LED in the glowing watch band.

Accordingly, the user may customize the color of the watch band based on the color that is captured by the camera on the iPhone or Apple Watch body.

For example, as shown in patent FIG. 10 above, the user may use an iPhone to capture image #1010 of a user's outfit (e.g., shirt, skirt, pants, etc.) to coordinate the color of the watch band with the user's outfit.

Apple's granted patent 10,175,653 was originally filed in Q4 2016 and granted today by the US Patent and Trademark Office.