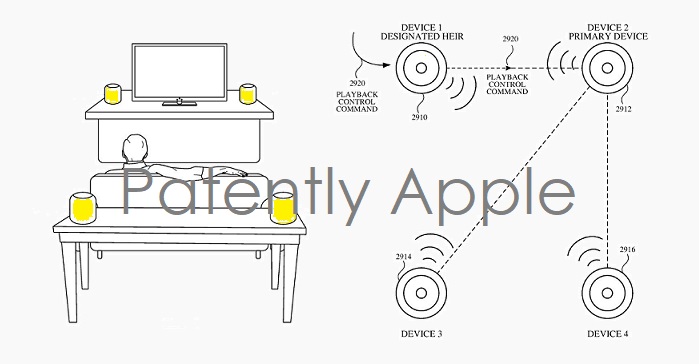 A new Apple patent application that was filed in the Kingdom of Denmark was discovered by Patently Apple earlier today that covers possible future functions and features related to HomePod. One such feature is a quad-speaker setup for a home theater experience. Considering that Apple is entering the streaming content business in the not-too-distant future, this is a real possibility of coming to market in sync with their new service.

Another feature involves in-home messaging for HomePods scattered throughout the home. Apple describes a new "presence" feature to detect who is in which room to ensure the message goes to the right person. This super advanced AI will either be seen by Apple fans as crazy cool or an off-the-wall tool for Big Brother. It's fascinating to know that such technology is even in the works.

In the end, it's clear by this patent application that Apple has a grander vision for HomePod that goes way beyond its humble start as a single smart speaker. There's even some interesting software Apple is working on to enhance the HomePod experience.

Apple's patent FIGS 10L and 29A below are pretty straight forward. Apple intends to introduce a 4-HomePod setup in the future that could tie into Apple TV to provide a home theater experience for their upcoming video streaming service. Users will be able to control the audio from an iDevice. 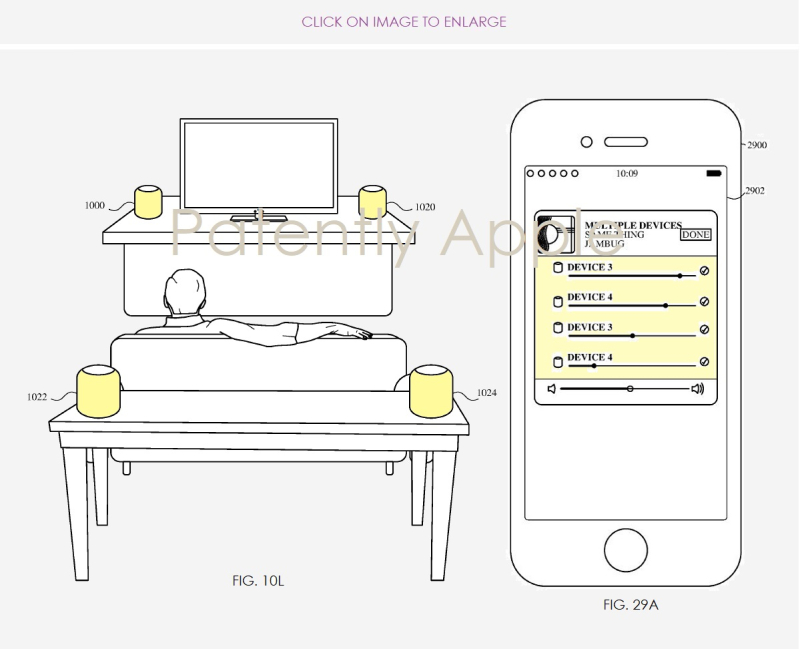 In the future, HomePod will be a part of a smart home setup where HomePod becomes and in home intercom system that will provide some really awesome or eerie capabilities depending on your perspective.

As an example, a mom wants to notify her child that supper is ready using Siri on HomePod. Siri, according to Apple, will be able to determine a physical position of a user in order to deliver output of audible notifications as appropriate. 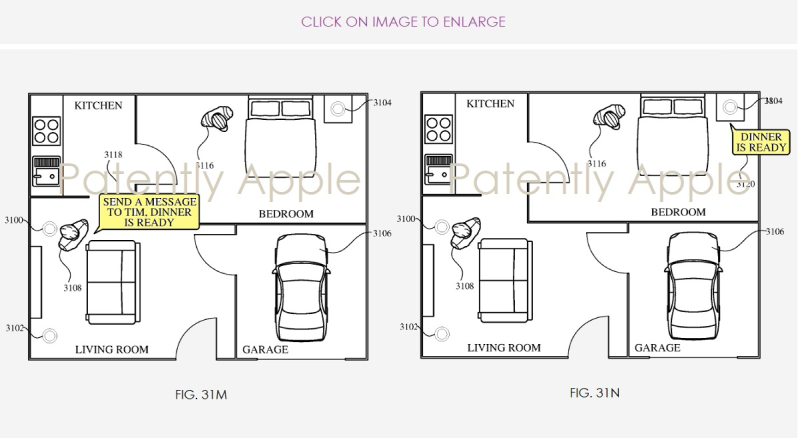 More specifically, Apple notes that determining the presence of a particular person in a particular room, The HomePod will be able to detect breathing patterns of a particular user, their footstep patterns, motions sensors or a camera.

When having a dinner party with friends, HomePod will be able to detect your friend's iPhones, be able to check their favorite tunes and create a custom playlist that could be played during the party. Different friends with different music tastes could create quite an interesting music evening for all. Everyone likes to hear their favorite music and this future HomePod feature just might be a big hit at parties. 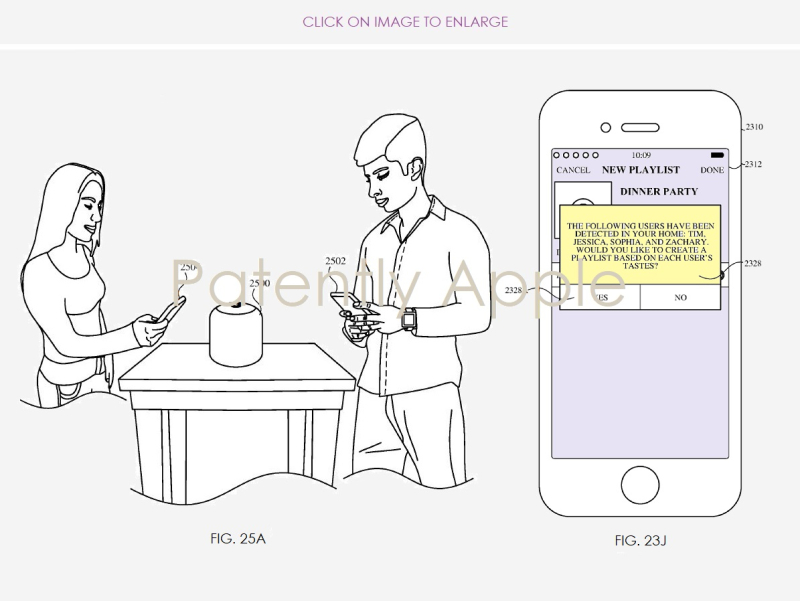 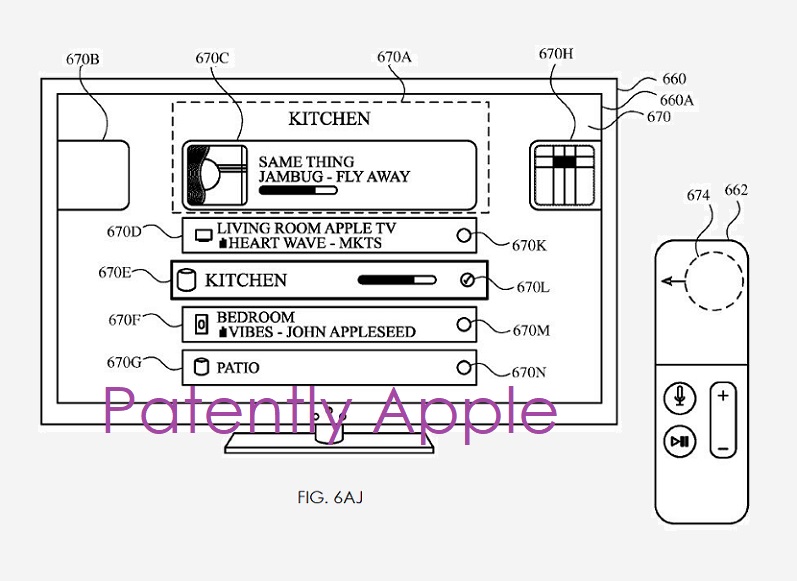 Apple's Home App will have a HomePod hub section allowing custom setup throughout the home, patio, garage and so forth. 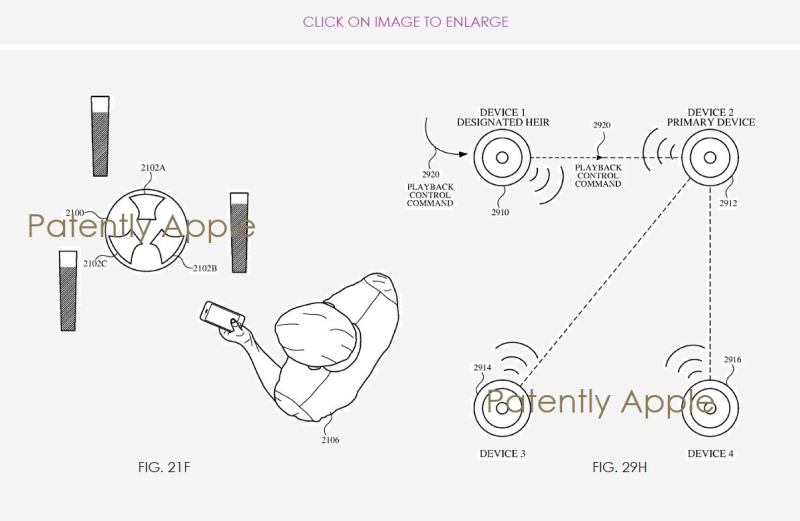 It appears that once Apple introduces a quad HomePod setup, users will also be given more control over audio customization. There's no doubt that quad HomePod systems will be used in a wide variety of rooms in a home or office and giving the user maximum flexibility to customize the audio will appreciated by audiophiles and movie watchers.

Apple's patent was filed in The Kingdom of Denmark in Q2 2017 and published in Europe on January 16, 2019. Thirteen Apple engineers were listed on this invention including Aimee Piercy (Senior UX Designer); Pedro Mari (Sr. Code Artist designer, Human Interface; and more. Considering that this is a patent application, the timing of such a product to market is unknown at this time.