Home Archives Contact Us Subscribe Twitter MeWe Patently Mobile
Egypt's PM Spoke with Apple in Davos to Open Stores, Assist in Education and Consider a Mfg. Hub for the Middle East & Africa
Which of Intel's 7nm Processor Plant PR Stories is the real deal – the one promoting Arizona or Oregon? 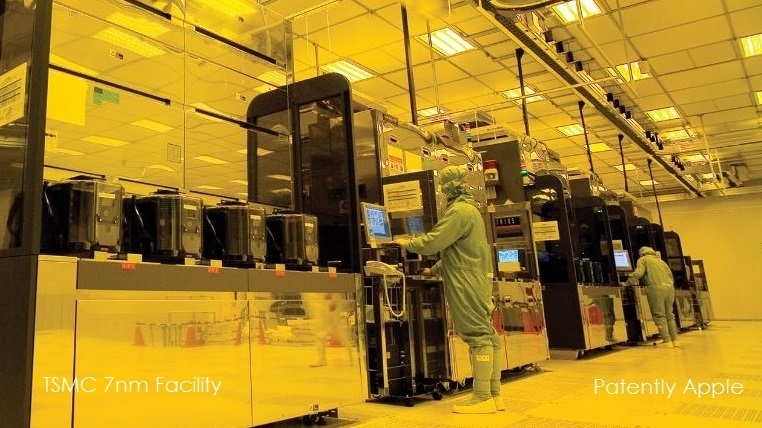 Apple was one of few smartphone companies to introduce a 7nm processor from TSMC in 2018 and reportedly they're on schedule to use an advanced 7nm processor in 2019 iPhones. In October Patently Apple posted a report titled " TSMC Expected to be the Sole Supplier of Apple's 2019 A13 Processor based on 7nm with EUV beating out Samsung." Looking to 2020, Apple could be one of the first to TSMC's 5nm processor that is set to advance AR, AI Deep Learning and provide power for days.

Today Digitimes reported that "Despite its dim business and industry outlook this year, Taiwan Semiconductor Manufacturing Company (TSMC) continues to make progress in the development of sub-7nm process technologies with plans to move a newer 5nm EUV process to volume production by 2020 well on track."

We reported in January that TSMC broke ground for their 5nm fab in Tainan that will cost more than US$24 billion. TSMC will have trial runs in Q1 2019 and move to full production in 2020. The new plant will also house their 3nm R&D center with hopes of having 3nm processors in smartphones by 2022.

The Digitimes report further noted that "TSMC CEO CC Wei disclosed at the company's recent investors meeting that the foundry is scheduled to start taping out 5nm chip designs later in the first half of 2019. TSMC is on track to move its 5nm process incorporating EUV lithography technology to volume production in the first half of 2020, according to Wei.

TSMC regards its 5nm process, dubbed N5, as a long-lived node, same as its 7nm, 16nm and 28nm processes. Wei disclosed that TSMC's 7nm chip customers are 'all' engaged with the foundry at N5, without giving further details." That statement  would infer that Apple is engaged with TSMC's 5nm team for future iDevices.

TSMC also unveiled as high as 80% of its capex (capital expenditures) this year will be spent on the foundry's 7nm, 5nm and 3nm process technologies.

You could read today's Digitimes report on this subject which will remain accessible to the general public for 20-30 days. Afterwards it goes behind a paywall.