Home Archives Contact Us Subscribe Twitter MeWe Facebook Patently Mobile
Future HomePod Features may Include Interpreting 3D Hand Gestures, Multiple Cameras & Siri the Psychologist
Apple's CEO is Making Deals in Davos and one of them is to build an Apple Store in the Czech Republic

According to the First Analytical Report on US iPhone Sales for Apple's Q1 2019, the iPhone XR was the Runaway Winner 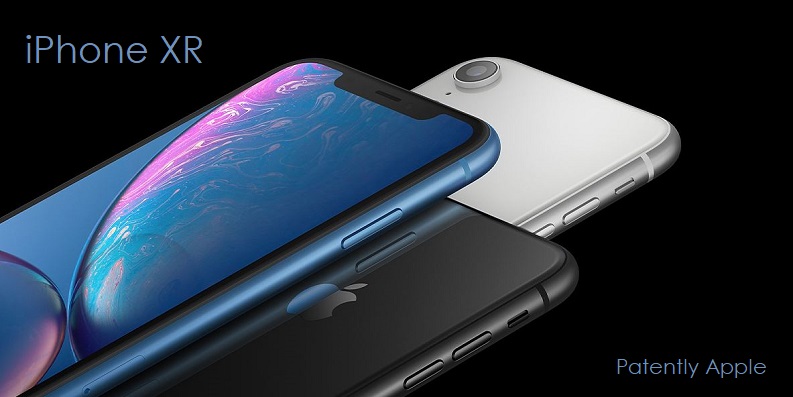 Today Consumer Intelligence Research Partners released analysis of the results from its research on Apple, Inc. for the fiscal quarter that ended December 29, 2018 (calendar Q4 2018).

CIRP's research found that the new iPhone XS and XS Max models accounted for 26% of US iPhone sales in Apple’s first fiscal quarter.

The research further found that Apple's new iPhone XR, , accounted for 39% of US iPhone sales for the entire quarter even though not released until October 26, 2018

Josh Lowitz, CIRP Partner and Co-Founder: "With all three new iPhone models available for most of the quarter, we have a clearer picture of their relative sales. The three new models made up 65% of sales, compared to 61% for the iPhone 8, 8 Plus, and X a year ago.

Lowitz added that "The mix among the new phones is interesting, however. The single  iPhone XR model almost matched the combined iPhone 8 and 8 Plus in the same quarter last year.

iPhone XR also had the largest quarterly share for a single model, at 39%, in the past couple of years, since the then-new iPhone 7 in December 2016, even though it was available only for part of the quarter.

Apple's iPhone XS and XS Max together accounted for 26% of iPhone sales, with the Max model outselling the standard-sized XS model by a more than two-to-one ratio."

The report further noted that upgrades from base storage to larger storage improved in the December 2018 quarter (Chart 2).

Mike Levin, CIRP Partner and Co-Founder: "Since the first iPhone, Apple has offered upgraded storage as an option. For many years each additional storage level carried a $100 premium. Now iPhone prices increase from $50 to $200 for incremental storage, depending on the phone model and the size of the boost in storage. The percentage of iPhone buyers who paid up for increased storage grew to 38% this quarter from 33% in the year ago quarter.

Levin added that "Based on the elevated pricing associated with larger storage, as well as the model mix sold in the quarter, we estimate Apple increased its ASP to well over $800."

In the end, although this report is limited to iPhone sales in the U.S. market, it would appear that the naysayers got the popularity of the iPhone XR completely wrong. It'll be interesting to see the estimated iPhone sales for Europe and China in the coming days or weeks.