While Stock Prices of all Major Parts of Samsung are down significantly, Korea's Press Decides to lash out against Apple 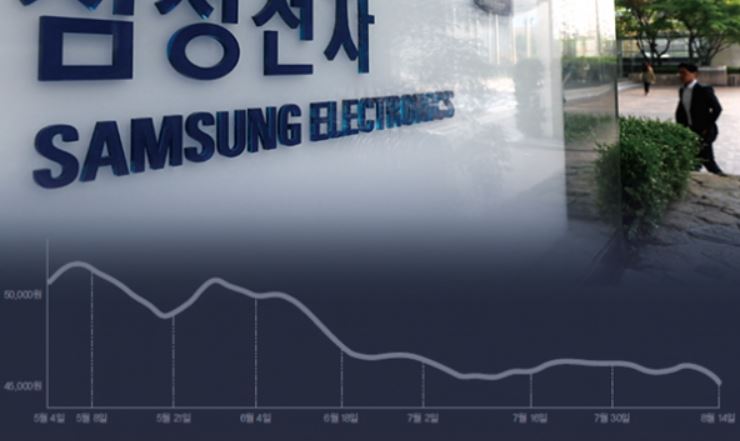 It was reported this week in the Business Korea publication that Samsung Electronics Co.’s share price helplessly fell even below the 40,000 won (US$35.26) level, which was the psychological supporting line, hitting the lowest point in 22 months. A negative outlook for market conditions and the company’s performance made securities firms lower the target stock price and it led to the decrease in stock price again. With weaker demand than expected causing supply excess, foreign and institutional investors are also going on a selling spree.

Beyond "Samsung Electronics," a second Korean report pointed to other Samsung divisions that are declining sharply as well.  The Korea Times reports that "Samsung Electro-Mechanics, Samsung SDI and Samsung SDS have all suffered a sharp drop in their stock prices amid a slowdown in demand for IT devices in addition to a recession owing to the U.S.-China trade conflict, analysts said Sunday."

The downdraft in Samsung Electronics stock, as seen in our cover graphic, shows that their problems are many and that the fall in their stock price didn't start with the US-China trade-war at all.

Reality is that Chinese consumers are now buying Chinese made smartphones and switching away from Samsung to a large extent and Apple to lessor extent. The company has fallen from being the number one smartphone vendor in China years back to now struggling to hold on to a measly 1% of China's market.

Throughout Asia, and India in particular, China's Xiaomi has overtaken Samsung as the leading vendor in a surprising surge. In 2019 other Chinese smartphone makers will be pushing harder into India that could further hurt Samsung.

Samsung is hoping that their new 5G ready Galaxy S10 smartphones will do well in the U.S. next year as they are working with Verizon to launch the first 5G smartphone in the U.S. for March or April 2019. They're also likely to introduce a hybrid phone/tablet (folding phone) in Q2 to spark interest and give their brand some needed shine.

In the interim, while Samsung's stock is in free-fall, the Korean press is back at smearing Apple in any way it can so as to boost sales for local Samsung and LG brands.

In a new Korean report published today they state that "An increasing number of Korean consumers are turning their backs on Apple based on the notion that iPhones offer a limited scope of functions in addition to the inconvenience of the iOS operating system, while Apple continues to maintain its high price policy.

According to Gallup Korea surveys, 22 percent of Korean consumers said they were willing to buy iPhones as their next smartphones in February 2017, but the figure fell to 17 percent in July this year.

This was attributed to the failure of new iPhones to feature significant improvements over their predecessors, while a technological gap among competitors has been reduced offering more alternatives to consumers."

An office worker in central Seoul said he used to be a big fan of iPhones, but began to think their functions were limited for their high prices. He was a user of the iPhone 6, but now uses Galaxy Note 8.

Personal Testimony #1: "For example, iPhones do not offer a voice call recording feature, which is widely used in Korea.  Plus, I sometimes felt inconvenienced when using Apple's iOS."

He added that Korean customers are unable to use several functions of iPhones that are used in the United States, Japan and China, such as Apple Pay and other near field communication (NFC)-based services.

While Apple Pay has been unavailable in Korea, Samsung Pay, a mobile payment service launched by Samsung Electronics, has dominated the Korean market, with Samsung's smartphones securing more customers.

An owner of a nail care shop in southern Seoul expressed complaints that it has been difficult to receive good quality after-sales repair service when she was using the iPhone.

The Korean Times added that "In addition to the dissatisfaction of Korean consumers, Apple has been also facing protests from smartphone retailers in Korea for what they called "unfair" policies, which have pressed them to buy in-store iPhones used only for display and other promotional purposes.

The full session of the FTC, which corresponds to a court trial, took place on Dec. 12, while the second session is scheduled for Jan. 16. If the corporate regulator rules the allegations true, Apple Korea could face a fine of tens of billions of won."

Even though the report was supposed to be focused on South Koreans madly switching form iPhones to those from Samsung, the report just could help throwing in unrelated but negative news of their FTC investing Apple for their evil ways. It's pure propaganda smear.

Prior to the full FTC session that began on December 12th, The Korea Times was out on December 7th preaching that Apple would be punished.  They were so convinced that this would be the outcome on December 12th, they posted a report with their biased byline of: "Korea set to fine Apple for unfair practices."

Of course December 12th has come and gone and the FTC has delayed their final decision until January 16th.

While the actual Korean report hedged its bet, it still relied on "personal testimonies" as proof of Apple doing something "illegal" against Korean wireless carriers. If Samsung has been offering these carriers a better deal, their corporate standard doesn't make Apple's contracts with the wireless carriers illegal. Apple is an international company that sets policies for all telecom carriers, not just for South Korea. The Korean press makes it very personal and definitely whiny. The testimonies of unnamed sources over the last few months have sounded more like a set script given to them by Samsung's marketing team.

The second part of the FTC session is set to take place on January 16th. With Samsung being the country's largest employer, I wouldn't be surprised if the FTC decides to hand down some kind of penalty to appease the locals.

However, I'd like to think that FTC fully understands that favoring locals could have larger ramifications in terms of losing future investments in their country by other foreign companies and raise the ire of the U.S. President that could strike back at South Korea if the ruling is out of proportion.

In the end, when Korea's FTC makes their final decision, we'll be back to report on this case that has Samsung's fingerprints all over it.