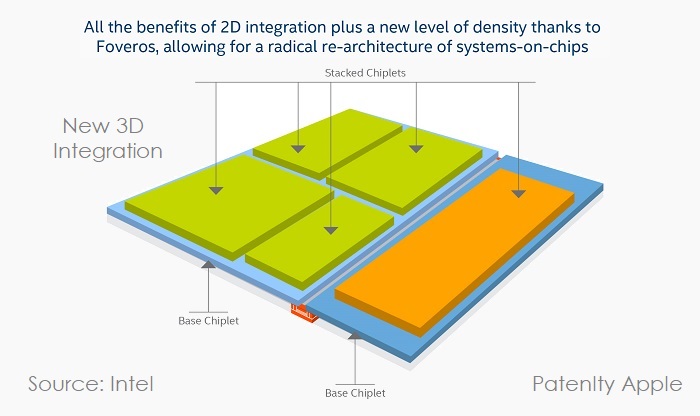 In October Patently Apple posted a report titled "AMD to Announce the World's First 7nm Processors at CES 2019 to Power Next-Gen Desktops for Work and Play." This keynote is a buzz for many tech enthusiasts who want to see innovation returned to the desktop and depending on actual release dates, could put a bigger dent into Intel's dominance on the desktop. In certain circles the buzz is at fever pitch and Intel knows that they've stumbled by delaying the 10nm processor for years. They've lost the trust of consumers. Yesterday Intel held an event that they're hoping will get the news out to be patient because their 10nm processors are coming next fall with great advancements.

At Intel’s Architecture Day, Raja Koduri, Intel’s senior vice president of Core and Visual Computing, outlined a strategic shift for the company’s design and engineering model. This shift combines a series of foundational building blocks that leverage a world-class portfolio of technologies and intellectual property (IP) within the company.

This approach is designed to allow Intel to drive an accelerated pace of innovation and leadership, and will be anchored across six strategic pillars: Process; Architecture; Memory; Interconnect; Security; and Software.

Raja Koduri expands on these six pillars coming to Intel's architecture here. Below are two jumbo slides presenting 2D and 3D packaging that will lead to new flexible designs. 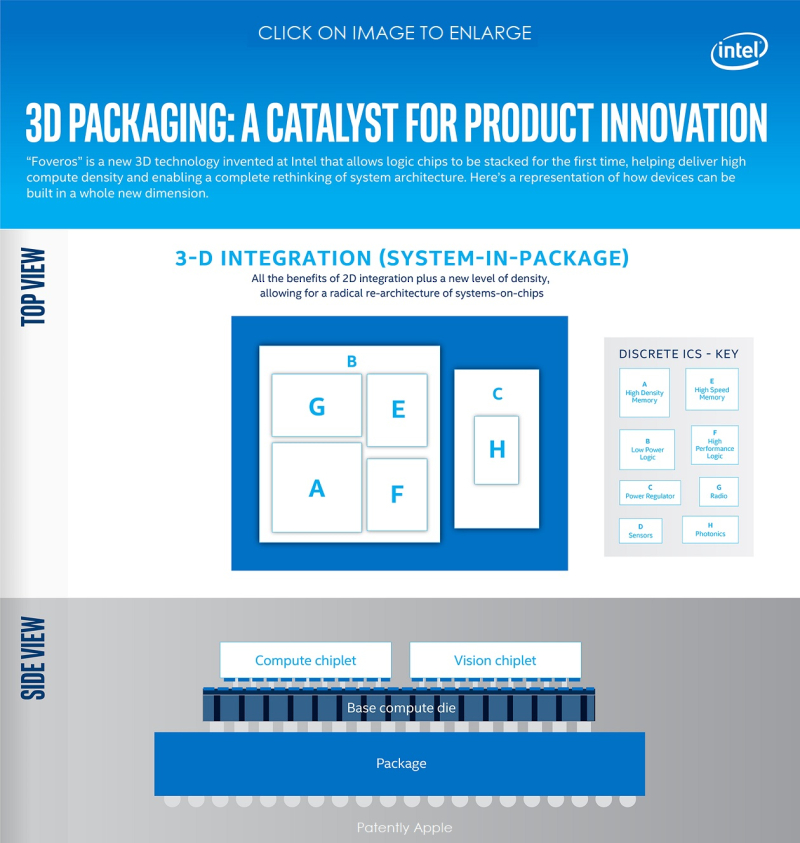 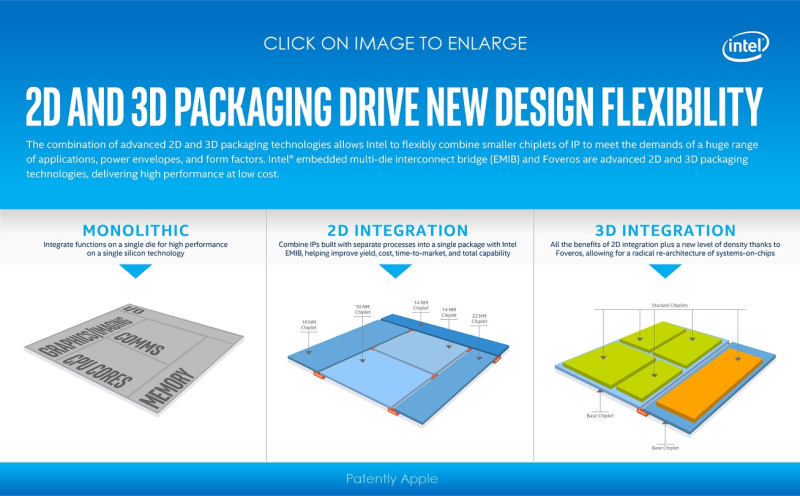 Intel also announced that its CES 2019 news conference titled "Innovations and the Compute Foundation" will be held at the Mandalay Bay South Convention Center Level 2, Ballrooms E & F on January 7 between 4 and 4:45 p.m. PST. Other Intel events will be held including Mobileye addressing automated driving vision and mapping technologies to be held at the Las Vegas Convention Center Room S228 on Jan. 8, 11:30 a.m.-12:30 p.m. PST. 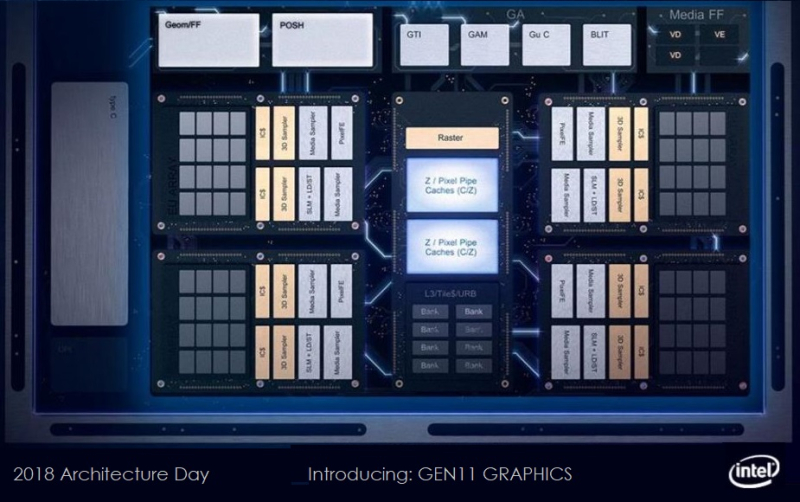 In respect to graphics, Intel is promising a huge improvement to the performance of its integrated GPUs. Its generation 11 ("Gen11") GPU will more than double the execution units from (usually) 24 to 64, and in so doing boost the number-crunching performance to more than 1 trillion floating point operations per second.

According to Ars Technica, it will allow users to actually play games like Tekken at 1080p. The new GPU will ship on 10nm processors sometime in late 2019 and will be paired with Intel's new "Sunny Cove" Core processors. In early 2020 Intel is still on target (said with a smile) to deliver their first discrete graphics card with its new "Xe" (pronounced "ecks") architecture.  For more on this read the full Ars Technica report here.

Intel has announced it will ship new 10nm 'Core' and Xeon processors built around a new architecture dubbed "Sunny Cove" in the second half of 2019.

While still derived from Skylake, it has been improved to execute more instructions in parallel and with lower latency, and certain buffers and caches have also been enlarged. The level 1 data cache is 50 percent larger than in Skylake, as is the cache for decoded micro-ops and the level 2 cache (with the exact size depending on market positioning). There will also be a huge leap in virtual memory.

Intel said that it will follow with 'Willow Cove' in 2020 and in 2021 'Golden Cove' is set to be released. You could read more about this here.

While AMD is set to deliver a few damaging blows to Intel in the first half of 2019, Intel knows that it can no longer put off their 10nm processors and take their customers for granted. Any further delays will ruin Intel's reputation for good and so a lot is riding on Intel delivering big time in the second half of 2019.

Apple is likely to adopt both Intel's Core and Xeon Processors based on the new Sunny Cove architecture for their Mac line-up in Q4 2019.

Intel is definitely under attack from AMD and to a lessor extent Qualcomm today, with  Apple in the shadows aggressively hiring Intel engineers for a new engineering lab in Oregon that is reportedly designing their own PC processor. 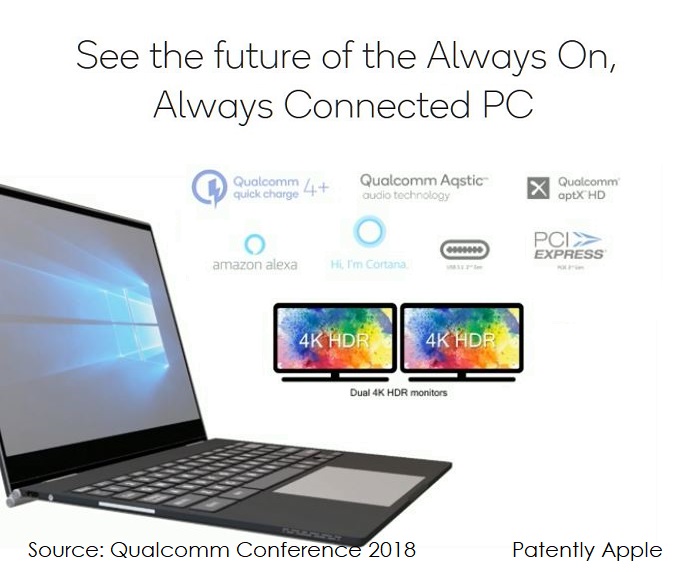