What is the former Qualcomm President hiding from? It's being reported that last week the Federal Trade Commission requested the court's permission to serve trial subpoenas on former Qualcomm president Derek Aberle and former Qualcomm vice chairman Steven Altman by mail after the two "repeatedly evaded attempts to personally serve subpoenas seeking their appearance at [the January 2019 FTC v. Qualcomm] trial."

In order to document those fruitless efforts, the FTC attached, among other things, a report by a San Diego process server, Mr. Manfred Arnold Briese, Jr about how they tried to serve Derek Aberle but were foiled at every attempt.

The FTC also tried to serve the subpoenas through Cravath, a law firm representing Qualcomm but also Messrs. Altman and Aberle at earlier depositions. However, Cravath denied being authorized to accept documents on behalf of Messrs. Altman and Aberle, pointing to the fact that Mr. Aberle is part of a group formed by former Qualcomm chairman Paul Jacobs, trying to raise funds to take over (and privatize) Qualcomm.

Mr. Aberle apparently concluded that testifying at trial wouldn't be in his interest. He doesn't want to do anyone a favor by showing up. He wants to be left alone. So he's hiding behind a duct-taped gate--or he's somewhere else, but the people currently living on his property are hiding, reports Florian Mueller of FOSS Patents.

The Process Server provided a photo of Mr. Derek Aberle's home gate wrapped with duct tape to ensure he couldn't be served. 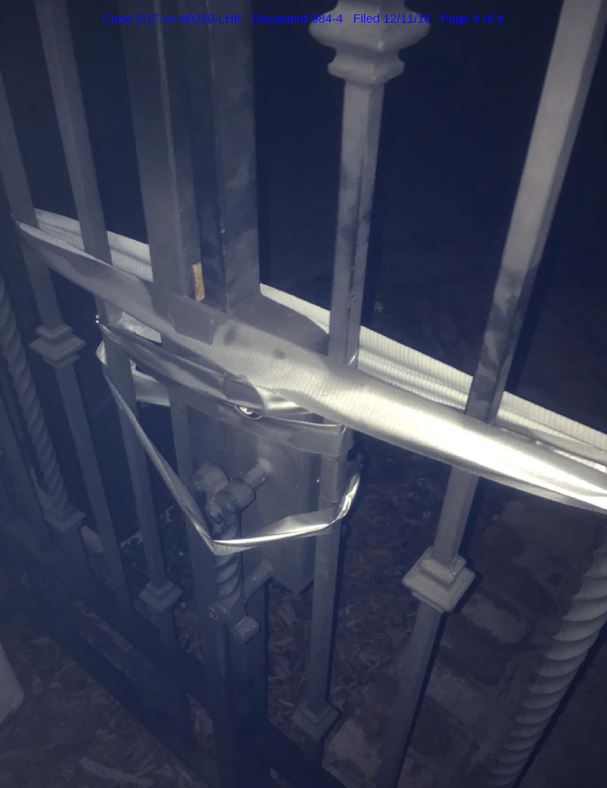 What won't help him avoid or delay his testimony is a potential federal government shutdown. Judge Koh handed down an order yesterday according to which the trial will go forward in any event.

Last week California Judge Koh rejected Qualcomm's latest argument to dismiss the FTC case against them because Apple was using Intel modems proving that they had no monopoly. Koh responded by saying that the case was about Qualcomm’s business conduct and not its market power.

On another front, a German court could possibly rule on ten Qualcomm-Apple patent infringement cases tomorrow if no delays are announced.