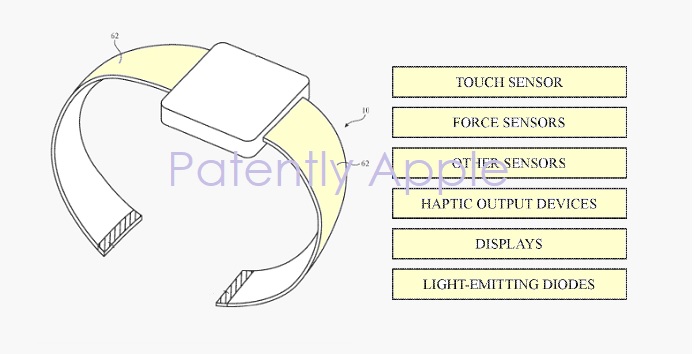 Today the US Patent & Trademark Office published a patent application from Apple that relates to smart fabrics integrated with a multitude of sensors and features like a camera and flashing color lighting in the form of strand-like stitching on leather that could be set to alert users of messages and more.  While an Apple Watch band and iPhone case are highlighted in Apple's patent filing, Apple makes it clear that the invention could apply to future devices like smartglasses, a headset or clothing.

In configurations such as these, it may be difficult or impossible to incorporate desired functionality into an electronic device. If care is not taken, device structures that have been selected to implement desired features may make the device unattractive, difficult to use, bulky, or overly complex.

While Apple illustrates an iPhone case as one example accessory this invention could be applied to, the focus appears to be on a smart Apple Watch band.

Apple's patent FIG. 10 below is a diagram of an illustrative wristwatch having a strap that is displaying an illuminated trim pattern and additional illuminated content. 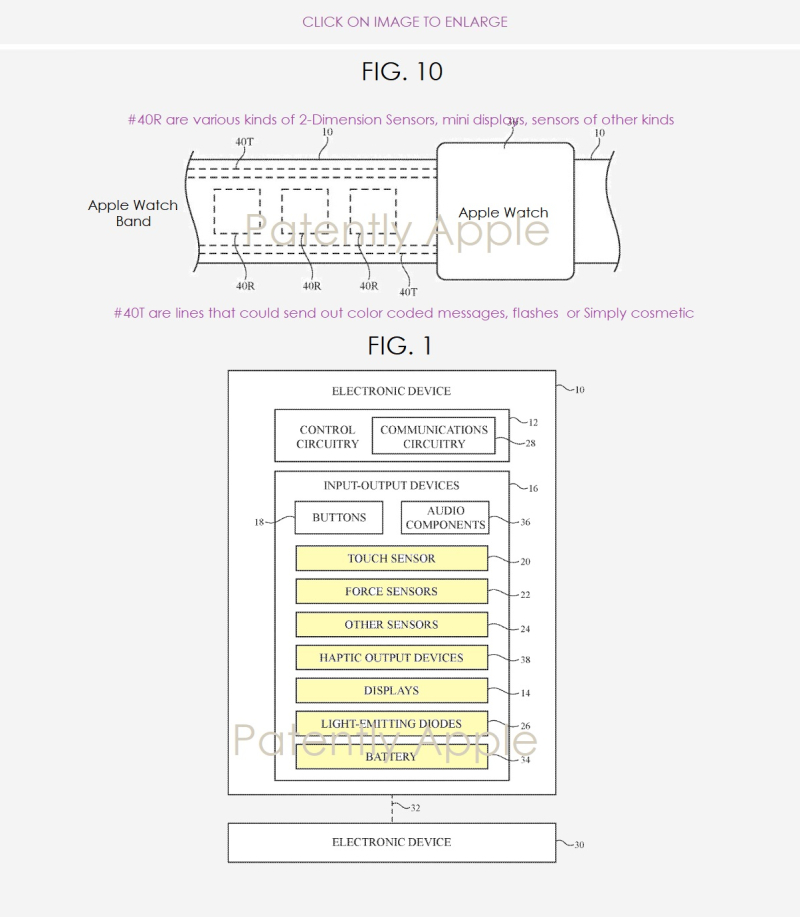 More specifically, patent FIG. 10 shows how device / accessory (#10) may have transparent regions in layer 40 such as regions #40T that serve as decorative trim and/or that convey information to a user. Regions 40T may be illuminated at all times, may normally be off, may be flashed on and off to convey information to a user, may be illuminated upon receipt of a message or upon occurrence of other events, may change color for aesthetic reasons and/or to convey information, and/or may otherwise be adjusted by control circuitry (FIG.1, #12) during operation of band.

Regions 40R may contain displays (e.g., one or more displays with pixel arrays for displaying images), may contain transparent areas patterned to form trim, symbols, characters, and/or other content.

If desired, a haptic output device may be overlapped by the mute icon or other selectable icon to provide a user with tactile feedback confirming when the icon has been selected. Mute functions, audio track playback functions, and/or other functions associated with selectable icons on the band may be used in controlling media playback paired to a set of earbuds, a paired set of wireless speakers, and/or other device.

The band (or iPhone case or MacBook) could be made from layers of material such as fabric, leather or other natural materials, polymer, metal, glass, ceramic, carbon fiber composites and other fiber composites, other materials, and/or combinations of these materials.

The gorgeous leather contains no "smart" circuitry as Apple is proposing. What looks like stitching could double as electric strands that could light up with color coded alerts for users when the lid is down. Whatever is described above relating to a watch band could apply to a possible future MacBook or a larger iPad Pro Smart Keyboard which is already fabric based.

Apple's patent FIG. 2 below is a side view of an illustrative electronic device showing how electrical components may operate through an outer layer of the device. 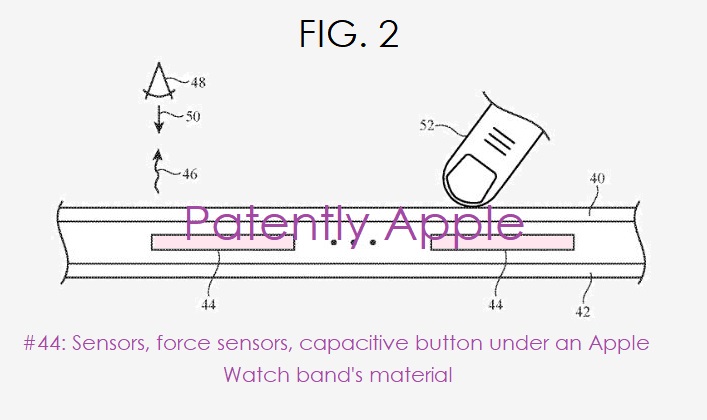 Apple's patent FIG. 5 below is a perspective view of an illustrative iPhone and smart case. 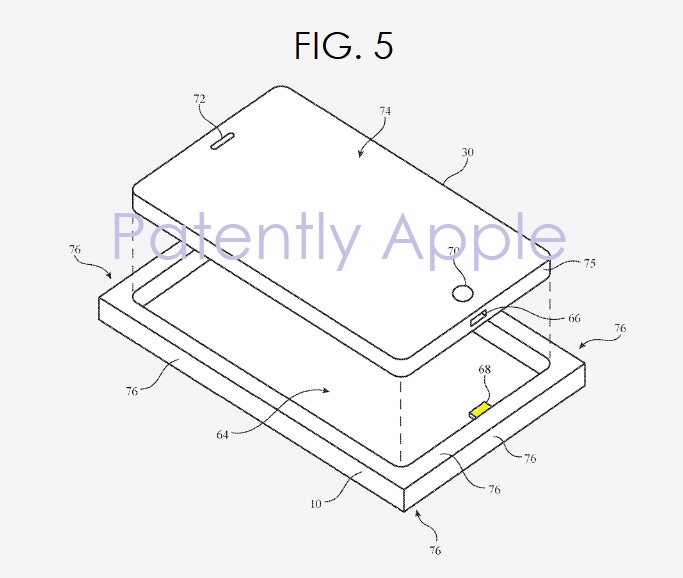 The same circuitry and sensors applying to an Apple Watch band described earlier in the report could apply to a future smart cover for an iPhone. The addition could be that the case adds battery backup power.

As with all major patents, Apple doesn't want to limit their invention to an Apple Watch band, an iPhone case or a MacBook. Apple extends it to headphones, a headset, an iPad, smart gloves, and deeper into materials of clothing and items like sofa seats.

Apple's patent application was originally filed back in Q2 2018 and published today at the U.S. Patent and Trademark Office. Considering that this is a patent application, the timing of such a product to market is unknown at this time.