Home Archives Contact Us Subscribe Twitter MeWe Facebook Patently Mobile
Apple Announces a Series of Major new U.S. Sites to be Built over the Next 3 Years that will Add Thousands of New Jobs
Apple Continues their Work on Devices with Illuminated Touch Sensitive Side Wall Icons

Apple's over the ear headphones have been delayed until 2019. It was reported in October that Apple had "faced development challenges" in getting the headphones out for the holiday season. Since that time a couple of Apple patent applications have surfaced regarding "wind noise reduction," and "noise cancellation using 5-mic voice beaming clarity."

Today the US Patent & Trademark Office published yet another over the ear headset patent application from Apple that relates to business multiparty conferencing that may end up being a separate "Pro" headphone model.  The headphone set will be able to create virtual conference room audio experiences and more.

Multiparty audio conference calls typically include audio signals from individual callers in different locations, such that it may be difficult to recognize who is speaking by voice alone. Often, a listener uses a stereo headset to listen to the conversation, and the audio signals may be processed to enhance recognition of the different participants.

Multiparty conference calls often have callers participating from different locations which may be all over the world. In situations without video feedback, it is especially difficult to identify a speaker. Often, when callers can't be identified or heard, interaction during such conference calls may be awkward. Embodiments discussed herein aim to provide a more intuitive, clear teleconference experience.

One objective of Apple's invention aims to spatially divide audio signals from individual callers in a multiparty audio conference call to improve identification and speech intelligibility for a listener using a spatial audio headset.

Audio signals from the individual callers are processed by simulating a virtual audio environment (e.g., virtual room) whose acoustic properties resemble those of the real environment in which the listener is situated.

In one embodiment, the one or more microphones included in the headset are used to measure and characterize the listening environment of the listener and the audio system uses this information to select the closest preset virtual audio environment.

By virtue of synthesizing a virtual audio environment it is possible to control the virtual direction and distance (e.g., spatial position) of a caller, such that each caller appears to the listener to be physically separated from another.

Metadata included in the audio signals may be used to automatically cluster callers and reposition groups of participants in the virtual audio environment. Using a head-tracked sound reproduction system, the audio signals are dynamically filtered with binaural room impulse responses to account for and preserve the rendered location of the callers in the virtual audio environment. To increase speech intelligibility, the listener can rotate to the position of the active speaker, similar to a natural conversation.

Such a spatial rendering audio system facilitates a means for utilizing the "Cocktail Party" mechanism in the listener's brain, which is a key psychoacoustic process enabling an improved sound source segregation. It is therefore advantageously possible to more easily identify individual talkers and to increase speech intelligibility, without the need for visual cues or the need for a caller to state a name before talking during the conference call. Furthermore, it is advantageously possible to provide a virtual audio environment that is more natural sounding as compared to conventional technologies. You'll notice an oval shape in FIG. 1 that represents an oval conference table. The headphone system can pick up where people are sitting at the table (such as #123, 125 and 127) and set the audio accordingly to sound exactly what it would be like if you were a real-world conference table.

Apple's patent FIG. 4 below illustrates an example implementation of an audio system for intelligent augmented audio conference calling according having a programed processor. 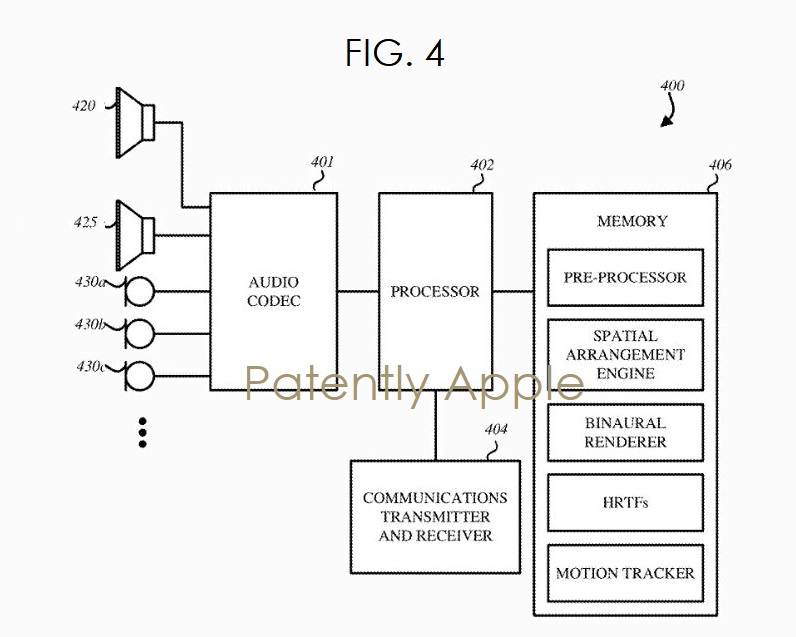