Home Archives Contact Us Subscribe Twitter MeWe Facebook Patently Mobile
While the Iron is Hot, Microsoft Launches a new 'Surface Go' Ad belittling Apple's iPad Pro
Unlike Apple, Huawei is Confident about the Strength of 2019 with a new Folding Phone, 5G and a 3D Camera

Back in 2014 Intel introduced a prototype of earbuds with built-in biometrics and a digital assistant called Jarvis. The fact is that it was a patent-pending invention by Apple at that point in time. Patently Apple first covered Apple's work on biometrics for earbuds all the way back in 2009. Apple won their first patent for biometrics in earbuds back in 2014.

A new Apple patent for biometrics in earbuds was filed in March 2017 and covered in our report titled "Apple Continues Work on Future Sports Oriented AirPods with Biometrics & Noise Cancellation Features."

Yesterday Apple was granted 50 patents and Apple was granted their second patent for biometric earbuds under number 10,149,041. The product is likely to be related to Apple's next-gen AirPods when they're launched in 2019 if they remain on schedule without delays. 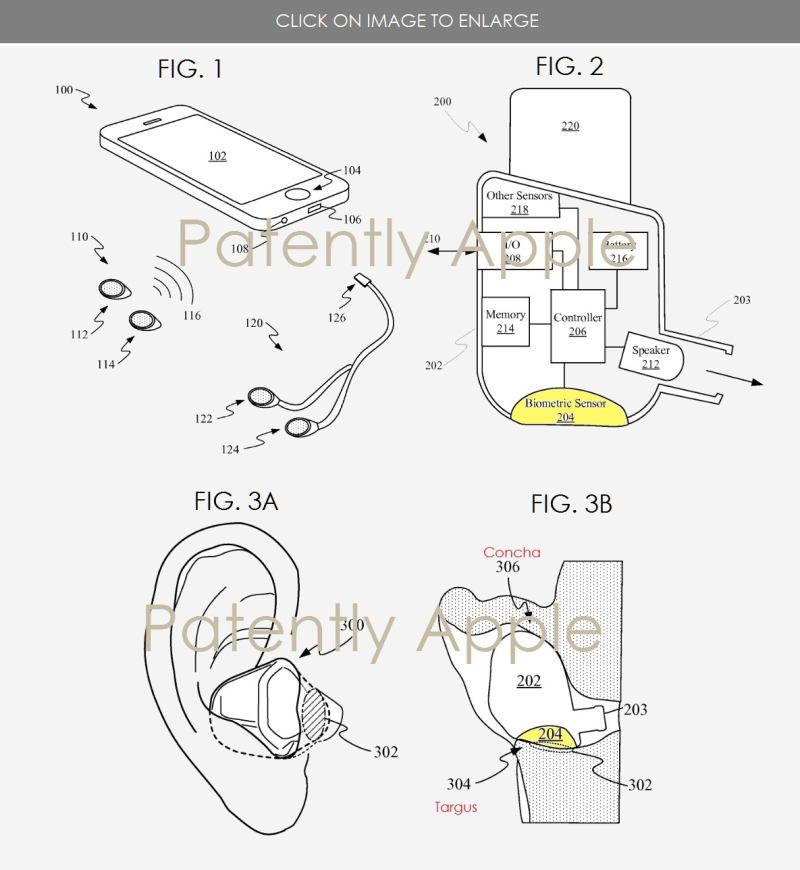 Apple's patent FIG. 2 noted above shows a cross-sectional view of an earbud device that includes a number of electrical components used to support the described device functionality; FIGS. 3A-3B show views of an earbud situated in the ear of a user and how a biometric sensor of the earbud contacts the tragus of the user.

A rumor surfaced in June by Bloomberg that the next generation of AirPods could possibly adopt biometrics as Apple's patents have outlined. Bloomberg's Mark Gurman wrote: "The Company has also internally discussed adding biometric sensors to future AirPods, like a heart-rate monitor, to expand its health-related hardware offerings beyond the Apple Watch."

Rumors published yesterday after Apple was granted the patent was opportunistic in nature and really didn't add any value.