Apple has been working on an invention which would allow the side panels or edges of an iPhone to have active virtual buttons to control features like audio and so forth since 2011. Apple has already been granted a patent for this invention and we reported on it back in 2016.  In February of this year we covered one of Apple's continuation patents regarding this invention. Apple back then was adding "force touch" to their invention. Today the US Patent & Trademark Office published yet another continuation patent where Apple is once again making several alterations to their invention.

In previous versions of Apple's patent the focus of the invention was applying virtual buttons for the side edges of a smartphone. This has been removed in Apple's latest application. No specific device is now mentioned in their patent claims which forces us back to the "description" area of the patent filing to acknowledge that Apple could apply sidewall virtual buttons to a MacBook or any other Apple device or accessory.

Beyond that major shift, Apple has made other tweaks that emphasizes that the illuminated virtual buttons could remain hidden until the user presses the sides with a particular force which that was covered in Q1's Apple update patent filing. The other changes to their patent claims include the following:

Patent Claim #2: The electronic device defined in claim 1 further comprising a cover layer that covers the array of pixels, the opaque masking layer, and the light-emitting diode.

Patent Claim #10: The electronic device defined in claim 1 further comprising circuitry between the first and second groups of pixels that is hidden from view by the opaque masking layer.

With iPhones getting thinner and most people using protective covers, having side wall touch icons wouldn't be practical and it seems like an invention that's past its time. Yet Apple engineers continue to work on this invention.

Technically, Apple could apply their technology to the sides of a new iPhone case accessory with strengthened glass being that 95% of the time iPhone users keep the case on. It could be added to a case that has a built-in battery, like this case invention that was published last week.

To review Apple's continuation patent #20180356913 and its revised or continued patent claims, click here. Our first patent report on this goes all the way back to 2013 and you could check it out here. Considering that this is a patent application, the timing of such a product to market is unknown at this time. 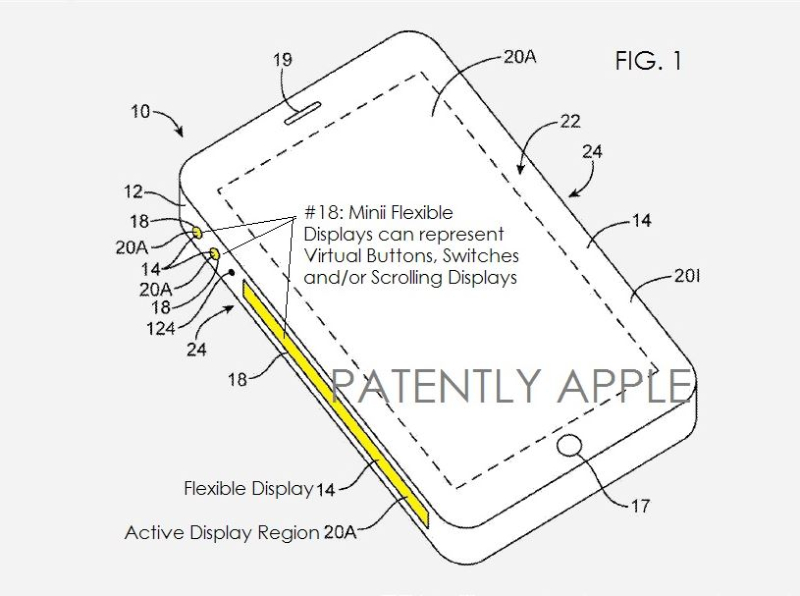 Posted by Jack Purcher on December 13, 2018 at 09:01 AM in 1A. Patent Applications, Apple Accessories, Apple iPhone, Devices, Components | Permalink | Comments (0)