A year ago there was hope that Apple's long battle with India's Telecom Regulatory Authority (TRAI) over an anti-spam app was over. Though in fact it wasn't over as Apple tried to work around the issue due to security concerns which angered the head of the regulatory body R S Sharma. By July 2018 Sharma warned wireless carriers that if Apple's iPhone didn't provide India's anti-spam app as requested that they could be called upon to delist and deregister the iPhone from their networks.

Today an Indian report is claiming that Apple has quietly complied with India's Telecom Regulatory Authority over an anti-spam app so as to avoid being delisted by wireless carriers in early 2019.

Specifically, the report points out what the government's letter to carriers read in-part: "Every Access Provider shall ensure, within six months' time, that all smartphone devices registered on its network support the permissions required for the functioning of such Apps as prescribed in the regulations 6(2)(e) and regulations 23(2)(d). Provided that where such devices do not permit functioning of such Apps as prescribed in regulations 6(2)(e) and regulations 23(2)(d), Access Providers shall, on the order or direction of the Authority, derecognize such devices from their telecom networks."

India Today's report headline reads: "Apple blinks, approves DND app made by TRAI for iOS store and iPhone users." While the report failed to explain or prove that Apple blinked and complied, we were able to find the new app on Apple India's App Store as our cover graphic presents. 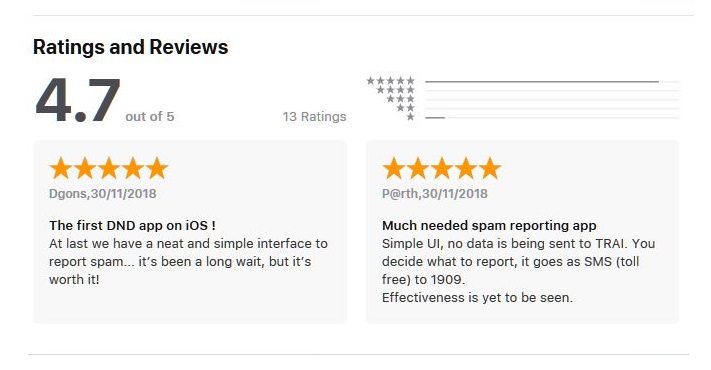 The India Today report specifically noted that the app is only available to those using iOS 12.1, which is currently running on 63% of iPhones going back to 2014.

For the record, a session during Apple's WWDC 2018 hinted that they would be complying with India's request with the app when iOS for India was published. India's Telecom Regulatory Authority didn't trust Apple would actually comply this time around and sent out the notice to wireless carriers as a warning to Apple that excuses would  no longer be tolerated.

With Apple struggling as it is in the Indian market just to make the smallest dent, it was surprising that compliance took as long as it did. India's Telecom Regulatory Authority threatening Apple with being delisted by India's wireless carries is as serious as it gets. This seems to be one of many poor business decisions Apple has made in India which is reflected by the dismal market position held in that country.