Walmart is Poised to Overtake Apple by Year's End to become the Third Largest eCommerce Retailer in the U.S. Apple Pay was launched in Q4 2014. Walmart didn't support Apple Pay and went on to release their own Walmart Pay a year later. Patently Apple posted a report late last month titled "Apple Pay Struggles to Stave Off Rival Payment Apps from Walmart, Google and Starbucks," which provided a chart showing how Walmart Pay is now on Apple's doorstep.

On the same plane, a new report posted this week by eMarketer showed that Walmart is forecasted to overtake Apple to become the third largest eCommerce retailer in the U.S. this year behind eBay and leader Amazon. That could very well push Walmart Pay to overtake Apple Pay as well.

The report noted that heading into the fiercely competitive holiday shopping season, Walmart is poised to capture an even larger portion of this year’s online retail sales.

By the end of 2018, Walmart will capture 4.0% of all online retail spending in the US, totaling $20.91 billion. In our July forecast, eMarketer estimated that Walmart would capture a 3.7% eCommerce share this year.

Importantly, Walmart has one of the fastest growing eCommerce businesses. This year, its online sales will grow 39.4%. Meanwhile, Apple will grow just over 18% this year—less than last year— as domestic sales for smartphones and other consumer electronic devices begin to slow down. Its eCommerce share will remain virtually unchanged at 3.9% this year.

In the big picture, when looking at a second eMarketer chart, I was taken aback at just how small a percentage eCommerce really is in 2018. 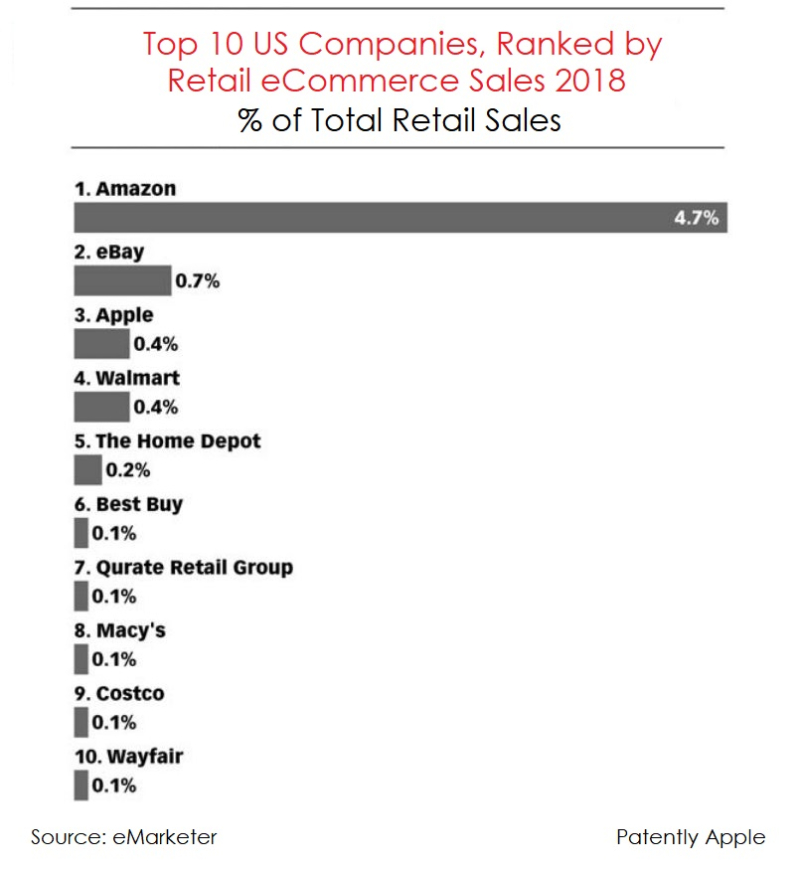