Home Archives Contact Us Subscribe Twitter MeWe Facebook Patently Mobile
While Apple's iPad Remains the King of Tablets, its Spiraling downward Trend makes it clear that the Party is Over
Apple Champs-Elysees Opens this Sunday in Paris with 330 Employees Speaking 17 Languages Ready to Greet Customers

Last month Xiaomi introduced their Mi Mix 3 smartphone that eliminated the front side notch by using a slider camera. Another Chinese smartphone company by the name of Nubia Technology has introduced their new "Nubia X" smartphone which went on sale in China on November 5. Their initial inventory of 100,000 units sold out in 57 seconds flat. It too has eliminated the front side camera which you could see in our cover graphic. The front side display is free from clutter and its fingerprint scanners could be found on both side frames of the phone.

One of the unique features about the phone is that it's light considering that it provides a secondary display on the back side while providing a 3,800mAh battery.

While the back of the smartphone has a shiny blue finish that looks very much like the back side of the new Huawei Mate 20, it has an invisible secondary display that turns on when needed as you'll see that in the Unbox Therapy video below. The backside display is quite bright and sharp as you'll see in the video below.

The backside display will be able to show selfie photos and support apps like a clock, a custom message or logo and more as noted in the graphic below. 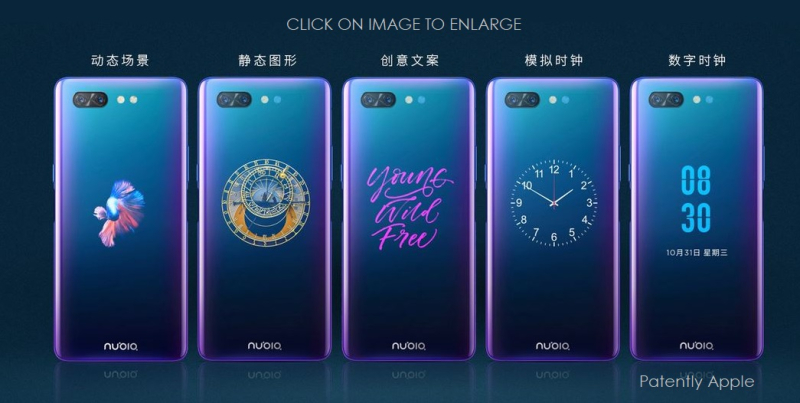 Another unique feature of the phone is for gamers. The back side display will act as a two button controller when playing video games as noted in the Nubia graphic below.

To review the full specifications of the new Nubia X smartphone click here. One site noted that the pricing starts at US$559.