Home Archives Contact Us Subscribe Twitter MeWe Facebook Patently Mobile
In Q3 Apple's iOS made Strong Gains in the U.S. against Android, the iPhone Remained #1 in Japan and more
Apple won 53 Patents today covering a Display that allows Sound to pass through it along with Design Patents for iPhone & more 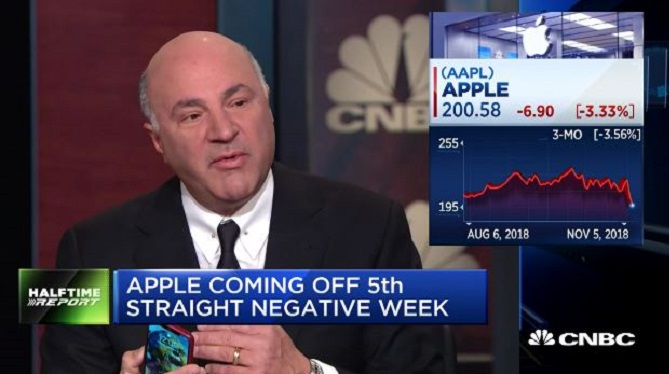 Kevin O'Leary, chairman of O'Shares ETFs and an investor on "Shark Tank," told CNBC on Monday he dumped Apple stock within "seconds" of the tech giant's announcement last week that it would stop revealing device unit sales. "Don't ever tell me on a call, I don't care who you are, what I should know and what I shouldn't," he said on "Fast Money Halftime Report." "I'll decide what's relevant."

Apple is a "closed environment" and it has to sell hardware to add and retain services customers," he argued. "What do you mean you're not talking unit sales?" he said, incredulously. "If I don't know how many you're selling, I don't know anything about you anymore."

"It's going to take a lot to get me back in," O'Leary said. "This is going to go south now because everybody's going to try to figure out, 'How do I measure.'"

Patently Apple did a follow-up report to our November first report titled "In 2009 Steve Jobs Mocked Amazon for not Reporting Kindle Tablet Sales."