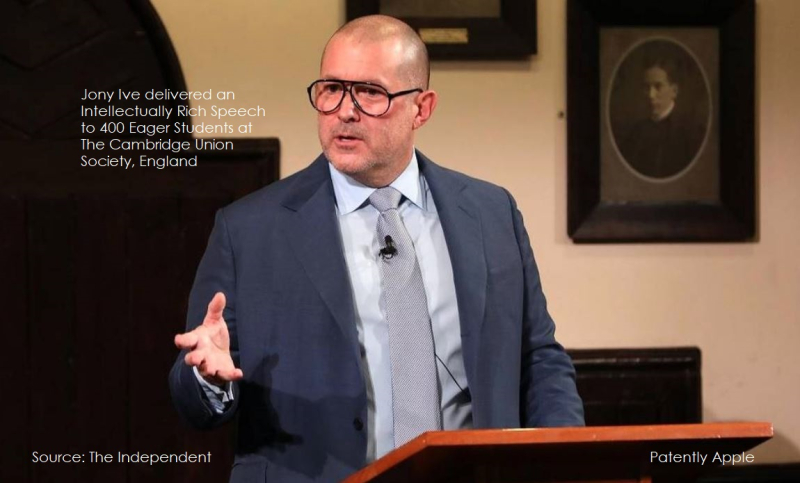 Last month Patently Apple posted a brief report titled "Jony Ive Interviewed by Anna Wintour, Artistic Director of Condé Nast at Wired25 Event." Weeks later we posted a second and deeper report titled "Jony Ive Talks about one of his Latest Creations: The iPad Pro." Today, we're learning of Ives third event in the last month. This time he was was in Cambridge delivering a speech. Here we learn more of Ive's reflection process and how painful it is at times at Apple to take ideas and have them materialize.

Today, David Phelen from The Independent covered Jony Ive's intellectually rich speech that he gave at the Cambridge Union Society where he was awarded the Stephen Hawking Fellowship. Charles Connor, President of the Cambridge Union explained that Ive was being awarded this Fellowship because Ive showed a flair in communicating complex ideas in a way to excite the imagination in the field of Science, Technology, Engineering and Mathematics.

Phelen noted in his report that Jony Ive's speech before 400 or more students was intellectually rich but still accessible, dense with ideas and fascinating. Throughout, he was open and humble, repeatedly revealing the curiosity which is a central part of doing his work.

Ive's most interesting thoughts concerned creativity and the nature of ideas. "I spend my time at Apple in that intersection of art and technology. I think that, almost by definition, ideas are fragile. If they were resolved, if they were robust, they wouldn't be ideas any more, they would be shipping products, a finished album, a completed building. I'm not really entirely sure why, but I think I've always taken an enormous delight when the most tentative thought, often from the quietest voice, evolves into significant and substantial products.

Then there was a project that we came to describe as multi-touch. Some of you may remember the first time you experienced the interface. Perhaps it was on one of the first iPhones or later on an iPad. But multi-touch describes the ability to directly touch and interact with your content to be able to pinch to zoom an image or flick through a list with your fingers.

Importantly, it defined an opportunity to create applications with their own unique, very specific interface. So, not being generic but being specific inherently describes the application's function. We came to see that we could make applications purposeful, compelling and intuitive to use. And so, as the potential for a vast range of apps became clear, so did the idea for an app store."

But it took time before it could happen: "In reality, the supporting technology, the enabling technology, took years to catch up with the ideas. And I have to say the ideas posed problems and defined challenges, but in the process, we came close to giving up on a number of occasions."

Ive ended his speech with words from his dear friend, the late Steve Jobs, and you could read them here in The Independent's report.