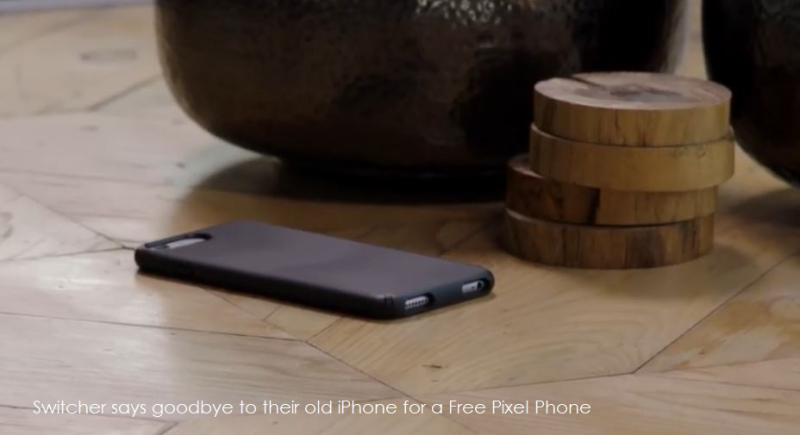 In February of this year it was reported that Google's Pixel 2 smartphone, with the camera critics fell in love with, only sold 3.9 million units in Q4 2017. That's less than Apple generally sold in under a week in the same period, reported the Verge. Will the Pixel 3 leap frog Apple's iPhone in Q4 2018? Don't make me laugh.

With the iPhone and Galaxy smartphones so entrenched in the U.S. market Google is finding it very difficult to make a dent. That means that they have to somehow persuade iPhone and Samsung fans to become switchers. That's going to be a very hard sell because the vast majority of Apple fans will never give up their iPhones, even with a free Pixel phone waved under their nose.

But there's always a group of consumers who could be persuaded to switch if the stars are aligned just right. One way to lure switchers is to have them star in Google's new Reality Show called "The Unswitchables."

Google hired James Davis to host the reality show / marketing series of ads for the Pixel 3 which could be viewed below. The actors pretend to be oh so torn leaving behind their beloved iPhones. Oh the pain - oh the angst. I mean is there ever any doubt how these faux challenges will go in the end as we bite our fingernails? Will these people actually leave their beloved iPhones! Those treasonous bastards! (said in jest). Is there really any sense of the tension being believable? Of course not.

If anything you have to feel bad for Google executives and engineers having to live in a fantasy world where everyone lines up at Best Buy overnight and around the block so Apple fans in shackles could finally be set free to buy the new Pixel 3. Finally, they gasp, Apple fans see the light.  Anyways, for now judge the ads for yourselves.

Unswitchables: Too in Love to Switch

Layne’s willing to switch phones but her girlfriend wants a one brand house. But will she risk a break up in order to step up to the Pixel 3?

Unswitchables: Too Anxious To Switch

Tommy’s a fashion blogger who’s always looking for new trends, but switching to a new phone makes him anxious. After trying on the Pixel 3, will he make it a permanent part of his look?

Unswitchables: Too Busy To Switch

Gladys is a chef and entrepreneur who says she’s too busy to switch phones. But will she find time when she sees how the Pixel 3 can help with her business?

For the record: In the three days of the ads running online, Google racked up 61k views for all three videos in total. Apple put out a new ad 7 hours ago about their new Group FaceTime and it's already gotten 102K views. Last week 3 of Apple's videos racked up to 1.2 million views. That kind of tells a story all by itself. But I guess to make Google fans feel better, Google's making progress considering that Samsung's last three new online ads only got a mere 26K views.