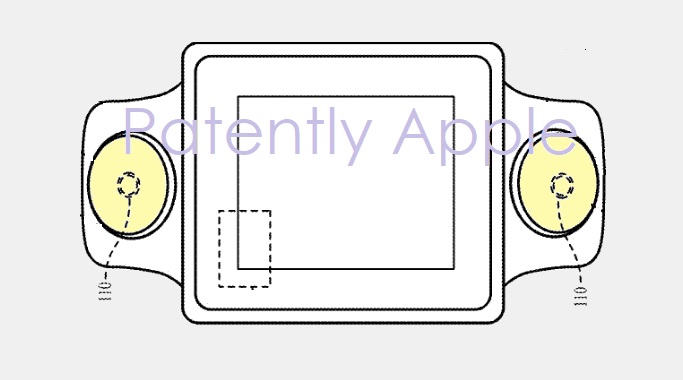 In June 2016 Patently Apple posted a patent report titled "Apple Watch Patents Cover the Ultimate Selfie Camera." Apple noted in their patent that "the camera can be disposed on the front surface of Apple Watch face to capture images of the user" – being the ultimate selfie camera." The camera would be both video and still photo capable. That patent was about the camera in Apple Watch.

Today, the U.S. Patent and Trademark Office officially published a newly granted patent for Apple relating to an Apple Watch specialty band that could include either one or two built-in cameras for selfies and FaceTime conferencing. Apple has a series of 'specialty' Apple Watch band patents on record (One & two) covering very specific functions that may be added to bands in the future.

Apple's newly granted patent covers their invention relating to Apple Watch with cameras and a processor for capturing and processing images. One of the specific functions of this Apple Watch feature is to provide users with the ability to use FaceTime. A second feature of this invention covers the ability to track the user's face during a FaceTime call so that the images appear stable while the wrist moves a little while talking. 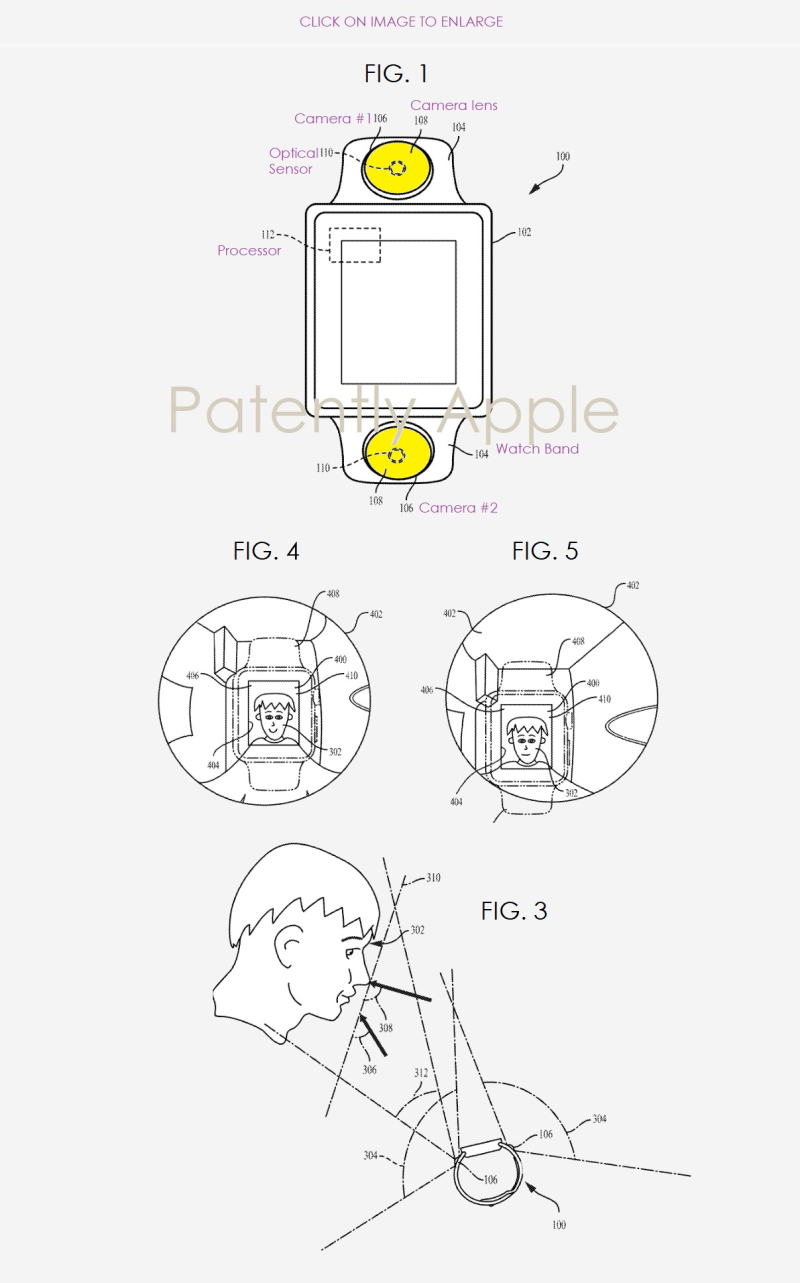 More specifically, Apple's invention describes image-capturing devices (cameras) that can process captured images and output image data based on the captured images. For example, the output image data may represent only a portion of the source image originally captured. The source image may have been captured by one or more cameras of the image-capturing device, which may be a watch. The cameras may have wide-angle lenses. The wide angle lens and/or multiple cameras can help a user capture a larger scene containing a scene or a target subject of interest without requiring the user to precisely aim a camera of their watch or frame the shot at the time of capture, since the scene or target subject can be extracted from the source image data later.

This can benefit the user since watches are usually worn on wrists, which may have a limited range of comfortable motion, or which are not always freely movable (for instance, while holding a beverage). Further, motion to aim a camera of a watch may move a viewfinder (if any) of the watch into an unobservable position, making precise aiming and framing difficult.

For example, some embodiments of image-capturing devices described herein include two cameras (each including a wide-angle lens), a watch body, and a watch band coupled to the watch body. The two cameras may simultaneously capture images. Then, a processor of the image-capturing device may combine image data of the simultaneously-captured images from the two cameras into resultant image data representing a single continuous image. The single continuous image may subsequently be cropped to include only a target scene or a subject of interest.

The cameras may also identify and track a tracking target within the source image, and may automatically crop the image around the tracking target to output data of only the cropped image including the tracking target. This can benefit a user who may be using a watch as their camera while recording their face (e.g., to store as a recording or for real-time transmission to another person participating in a video conference with the user - FaceTime).

Especially where a camera of the watch includes a wide-angle lens, the source image captured may be quite large, and the face of the user (the tracking target) may move around within the source image as the user moves their wrist.

By tracking and only outputting image data representing an area around and including the user's face, the video output appears to consistently center on and be framed around the user's face. This presents a more consistent image of the user (e.g., to the other person on the video conference) without requiring the user to maintain a steady wrist position.

In some circumstances, a user may prefer the appearance of their face from a certain angle (e.g., straight from the front), but the user may find it more comfortable to hold their wrist (and watch) at a different angle (e.g., at a low angle, below the user's face). Image-capturing devices described herein can process the source image data taken from the low angle, and can angle-adjust the image so that it appears to have been taken straight from the front. This feature allows a user to maintain a comfortable position of their wrist, while still outputting image data that appears to have been taken from a desired angle.

The impression is that the camera may be an accessory Apple Watch band at times and yet at others it sounds like Apple may be wanting to make this a standard band that comes with Apple Watch.

Apple's granted patent 10,129,503 was originally filed in Q3 2016 and published today by the US Patent and Trademark Office. One of the inventors listed on the granted patent is Megan McClain, a mechanical design engineer.