IDC reported today that the worldwide tablet market declined 8.6% during the third quarter of 2018 (3Q18) as global shipments fell to 36.4 million. There were no bright spots in the category no matter how you sliced it. Slate tablets accounted for the majority of the market with 31.6 million units, down 7.9% from the previous year. Detachable tablets also declined, down 13.1% from the previous year, to account for 4.8 million unit shipments.

It's the later segment that Apple is trying to bolster with the new iPad Pro announced on October 30th. Knowing the "unit data" clearly shows that Apple is attacking the iPad segment dropping the fastest.

Lauren Guenveur, senior research analyst for IDC's Tablet team stated: "In October we finally saw the highly anticipated refreshes of Apple's iPad Pro and Microsoft's Surface Pro, as well as new products by Samsung and Google, which lead us to believe that the last quarter of the year will turn the detachable category around."

Jitesh Ubrani, senior research analyst at IDC noted that "Even among the top 5, it is essentially Apple and to a lesser extent Samsung that continue to invest heavily in product innovation and marketing. This has helped the two companies to set themselves apart from the rest."

The only company that didn't have sales decline was Huawei who is out to challenge both Apple and Samsung, not only on smartphones but on tablets too. Their sales increased 7.1 almost exactly what Apple lost. 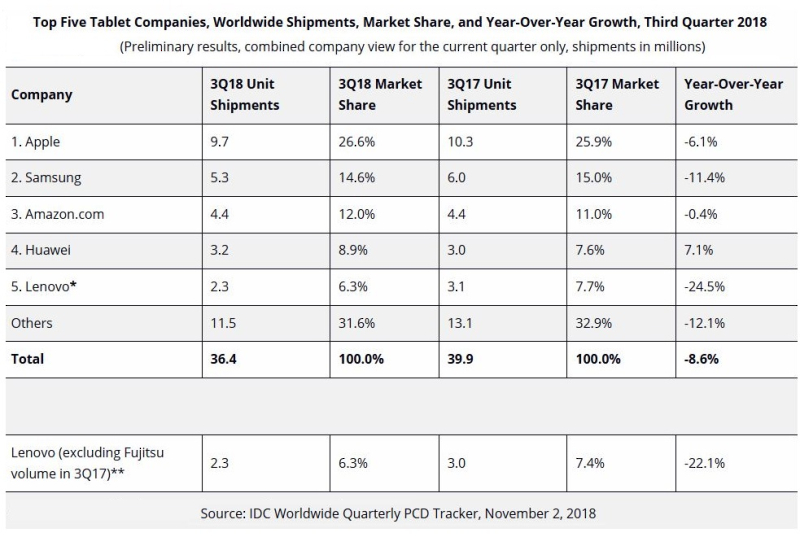 The report added that Apple continued to lead the tablet market with nearly double the shipments of its nearest competitor. The refreshed $329 iPad with Pencil support that launched in late March continued to drive volume although it was unable to maintain the same momentum from the third quarter of 2017 as that was the first time in a while that Apple had released a lower cost iPad. iPad Pro saw year-on-year declines in anticipation of a refresh at the beginning of the fourth quarter, which bodes well for Apple through the end of the year.

Samsung, Apple's nearest competitor maintained its position as the second leading tablet manufacturer despite a year-on-year decline. Its detachable portfolio grew modestly, however that growth was outweighed by continued declines in the slate category. Samsung continues to face pressure in its lower and mid-market segments as competitors offer slate tablets at a better value.

We learned yesterday during Apple's Financial Conference call that going forward, Apple will no longer report unit data for the iPhone, iMac and iPad. Yet unit sales do matter, and Apple's CEO used them like a weapon during his keynote segment for the iPad Pro on October 30th.

At roughly the 43:28 mark of Apple's latest keynote, Cook noted during the iPad segment of the event that "what you might not know is we've sold more iPads in the last year than the entire notebook lineup of all the biggest notebook manufacturers." 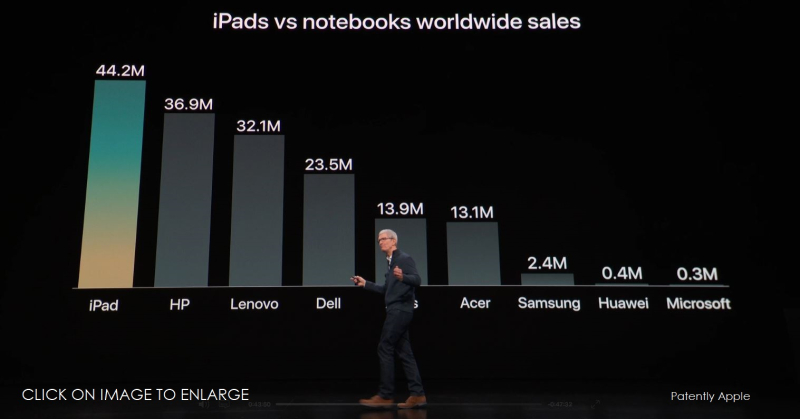 Of course that's individually and not collectively as it would be 122.6 million notebooks vs. 44.2 million iPads. Yet Cook using "unit stats" frozen in time made a a valid point that analysts slamming the iPad for losing ground is a bit unjustified when you compare iPad unit sales versus notebooks unit sales by HP or Dell.

With that said, Apple reported yesterday that iPad unit sales were down another 6% year over year.

Likewise it doesn't erase reality that the iPad peaked in 2014 and has been on slide ever since. 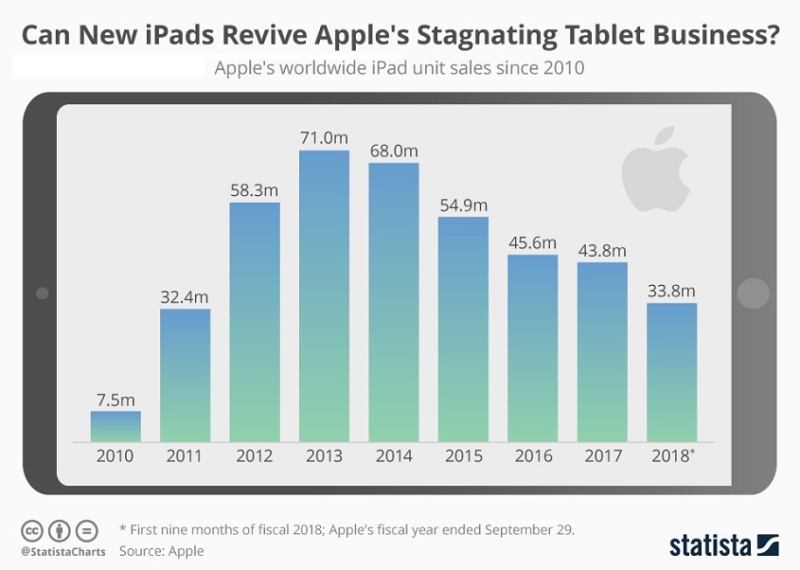 What's surprising about the IDC report today is how little Microsoft and partners are doing to challenge the iPad. Despite the incredible push by Microsoft with their Surface lineup along with partner Dell, HP, Lenovo, Asus and others pushing 2-in-1 designs, it seems like they're on a stationary bike going nowhere. Either there's a disconnect with IDC's statistics or Microsoft's iPad counter attack is a colossal failure.