Today the US Patent & Trademark Office published three patent applications from Apple that relate to varying aspects of Apple's digital assistant known as Siri.  In one patent, Apple describes one implementation of a standalone version of Siri that doesn't require it to access servers or cloud services to function. In another Siri related patent Apple acknowledges that they're working to make Siri more responsive and less frustrating. While that sounds promising on paper, let's see Apple deliver.

In 2017 Huawei announced a major development regarding their digital assistant. A report covering this noted that "unlike its competitors’ virtual assistants, which collect and gather information in the internet cloud, the prowess of Huawei’s AI assistant lies in processing data on the smartphone, rather than in the cloud."

Now Apple seems to be following this development of Siri relying on their current A12 Bionic to do the heavy lifting instead of using Apple's Cloud services – or will be doing this in the future according to Apple's "Offline Personal Assistant" patent application published today.

Apple notes in their filing: "Typically, a conventional automated digital assistant of an electronic device must rely on a backend (e.g., server-side) component to function, often due to computational limitations of the electronic device. As an example, speech-to-text functionality is often performed and/or validated by the backend component. As another example, the backend component is typically responsible for interpreting intent from a speech input and/or operationalizing the intent into a task."

Apple's invention is to establish an "Offline Personal Assistant" using the power of their current or future version of their Bionic chip.

Apple's patent FIG. 7A is digital assistant system #700 is implemented on a standalone computer system. 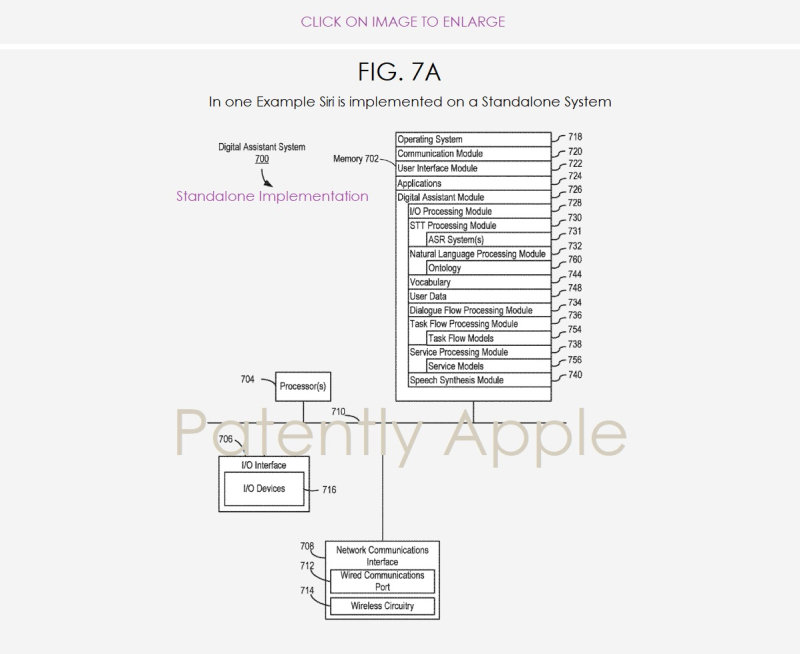 Although the objective of this patent filing is clear, to allow Siri to be used on a standalone computer such an iPhone or HomePod without using cloud services, the complicated patent filing mixes it all up with many examples using connected servers. So the clear cut objective isn't met with a clear cut answer. If you want to dig in and investigate it yourself, then check out patent 20180330731.

Feedback Analysis of a Digital Assistant

Although Apple's Marketing VP Greg Joswiak got his nose out of joint last year in an interview with Wired defending Siri against their more successful competitor's digital assistants, he quipped "Siri was designed to be a "Get-Shit-Done Machine" not Trivial Pursuit!"

While Siri does some things right, in general, Apple fans really want a digital assistant like Google Assistant or Amazon's Alexa that could actually answer questions naturally. I for one got fed up with Siri only giving me links on Bing as an answer rather than actually answering my question.

Regardless of what Joswiak said, Apple acknowledges the frustration that users are having with Siri. In Apple's patent titled "Feedback Analysis of a Digital Assistant," they note the following:

The problem is that the solution is delivered by people who eat Machine Learning for a living and therefore as mere mortals, trying find what they're actually doing to fix Siri is not really attainable. For those wanting to give it a shot, check out Apple's patent 20180329957 here.

In April Patently Apple posted a report titled "Bingo! Apple Hires Google's AI Chief, a move that should translate into Siri Catching up with Leading Digital Assistants." We can always hope.