Earlier this month Apple and Amazon signed an agreement to offer Apple's latest iPhones on Amazon.com in eight countries. Apple official statement read: "We're working with Amazon to improve the experience for Apple customers on their site and we look forward to those customers having another great way to buy iPhone, iPad, Apple Watch, Mac and more." Today we're learning about the "more."

Apple Music will be launching on Amazon Echo speakers and that could be great news for Apple being able to tap into the leaders customer base which is massive. 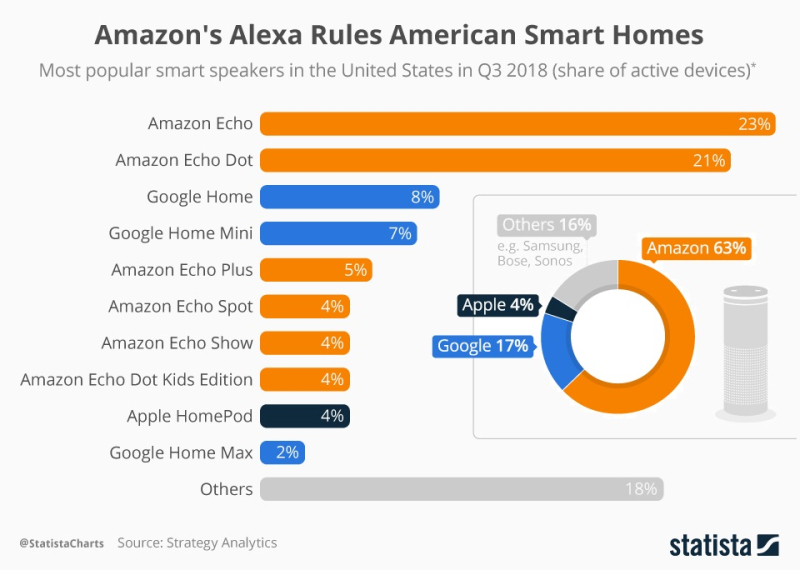 The chart above from Statista published this month shows us that Amazon continues to dominate the smart speaker landscape in the United States. According to a survey conducted by research firm Strategy Analytics in July and August 2018, the e-commerce giant accounted for 63 percent of the U.S. installed base at the time, beating Google (17 percent) and Apple (4 percent) by quite a margin. A secondary report pointed to Amazon holding on worldwide with 41% market share with its closest rival at close to 28%.

Customers will also be able to ask Alexa to stream expert-made radio stations centered on popular genres like Hip-Hop, decades like the 80s, and even music from around the world, like K-Pop. Just ask Alexa to play Beats 1 to hear Apple Music’s global livestream including in-depth artist interviews— all completely ad-free. Simply enable the Apple Music skill in the Alexa app and link your account to start listening."