Home Archives Contact Us Subscribe Twitter Facebook MeWe Parler Patently Mobile
Apple won 53 Patents today covering a Display that allows Sound to pass through it along with Design Patents for iPhone & more
While the Cheap Smart Speaker Market is Dominated by Amazon and Google, Apple aims at delivering a Premium Product

A Samsung Folding Smartphone Logo Suggests that a Prototype may Surface tomorrow at their U.S Developer Conference

Samsung's U.S. developer conference begins tomorrow where the company will roll out its latest technologies. While developers may get to see the new smart speaker they've been working on with HARMON.

Yet what Samsung has been teasing the market with, for some time now, is their first folding smartphone prototype that could be shown or talked about at their conference. The Samsung logo shown on the left-side of our cover graphic shows the Samsung logo folded over hinting of the foldable phone.

Patently Apple has covered the most recent rumors about the fold-out styled smartphone with the inside display folding out to 7.3 inches.

Whether Samsung will provide a 2019 release date for their first folding smartphone is unknown at this time.

In other Samsung news, the new Galaxy J4+ was launched in the Korean market today. The new smartphone sports a 6.4-inch display, 13MP face camera and a 5MP selfie camera and comes with a 3,300mAh battery and sells for the low US$235. 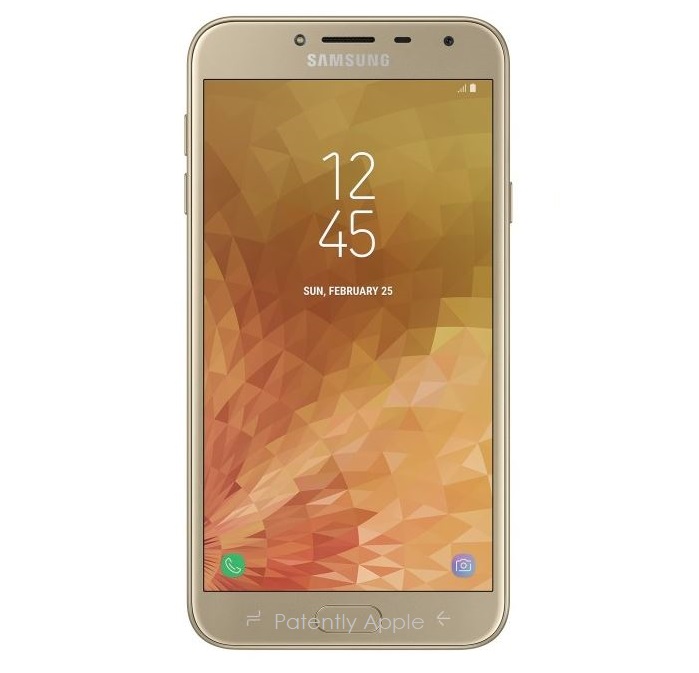 The new phone may be introduced in more markets on Sunday, February 25 as the Samsung image above shows. That's the day before the Mobile World Congress mobile event kicks off in Barcelona. This phone could do well in the States if the price holds.