Last week Patently Mobile posted a report titled "Samsung reveals that their new Infinity Flex Display for Foldable Smartphones will go into Mass Production in 2019." While Samsung's demo was criticized for illustrating a rather bulky prototype during their developer conference, I don't believe that it'll be as bulky once it hits the market in 2019. Why would Samsung show their competition what the final version would look like 12 months in advance?

When we look back at the evolution of the iPhone, for example, the first version was almost ugly if we compare it to today's iPhone XS Max (or other smartphone like the Note 9). While the first foldable smartphone may likely look a little bulky, evolution over 5 or 6 years should bring about a slicker design combining a smartphone on the exterior and a mobile TV or gaming device on the interior.

Today's smartphones are without a doubt hybrid devices. With advanced cameras being the center of smartphones today, some have suggested that in many cases the smart camera just happens to have a phone, reversing the priority and perception of the modern smartphone.

So while the idea of the "smartphone" of tomorrow being used more as a mobile TV or gaming device than a phone, we shouldn't be surprised. Samsung's first folding smartphone has a front side display just like a normal smartphone. Yet when unfolded, there's a larger 7.3" display on the inside so as to provide users with a mobile TV display once 5G services are in full bloom around the globe.

Of course the larger inside display will also appeal to mobile gamers using it as a gaming machine while others will use it a premium multitasking device for professionals. Having the right apps and offering consumers the proper content and features, these next-gen foldable smartphones could be a hit.

While phablets took time to take off, especially with Apple, it's now the number one form factor today. Foldable smartphones may sound like overkill but over time as they evolve, it's very likely to take at least 40-50% of the market over time.

This week the U.S. Patent Office published another elaborate foldable smartphone patent application from Samsung. Below you'll find 9 out of 17 patent figures that are found in our Patently Mobile version of this report here. 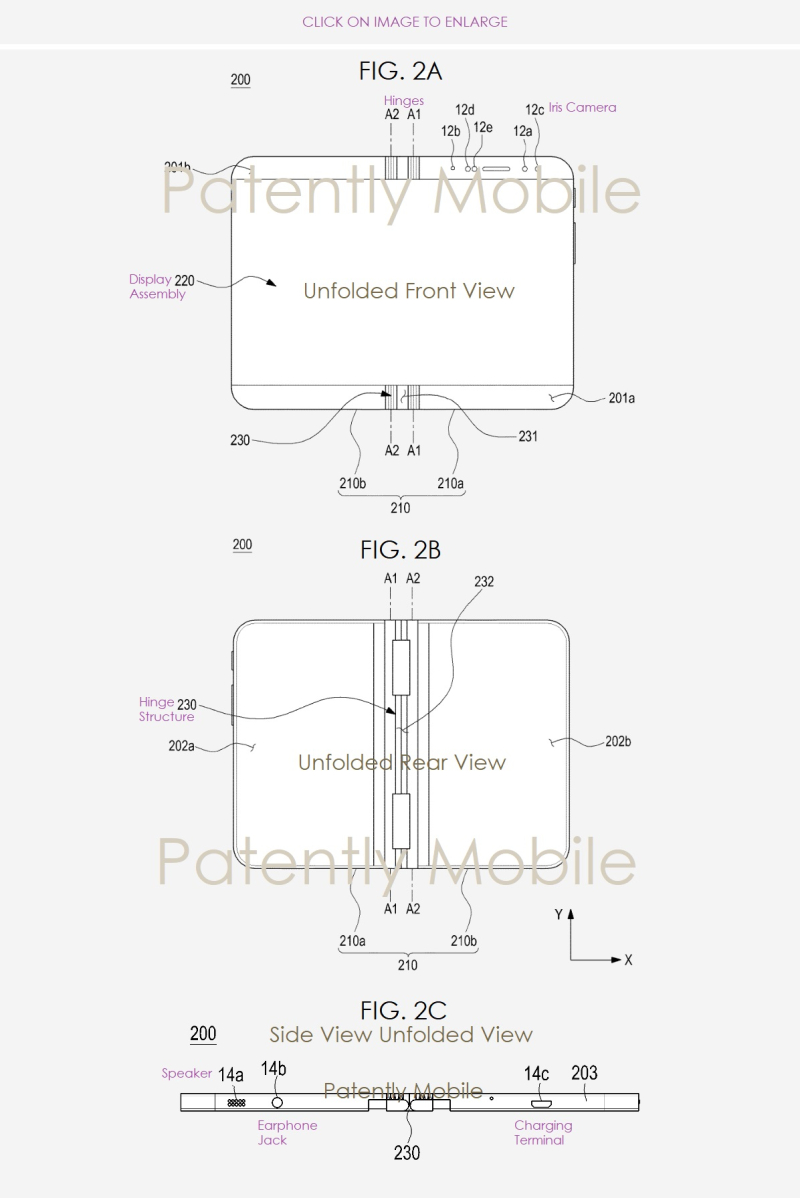 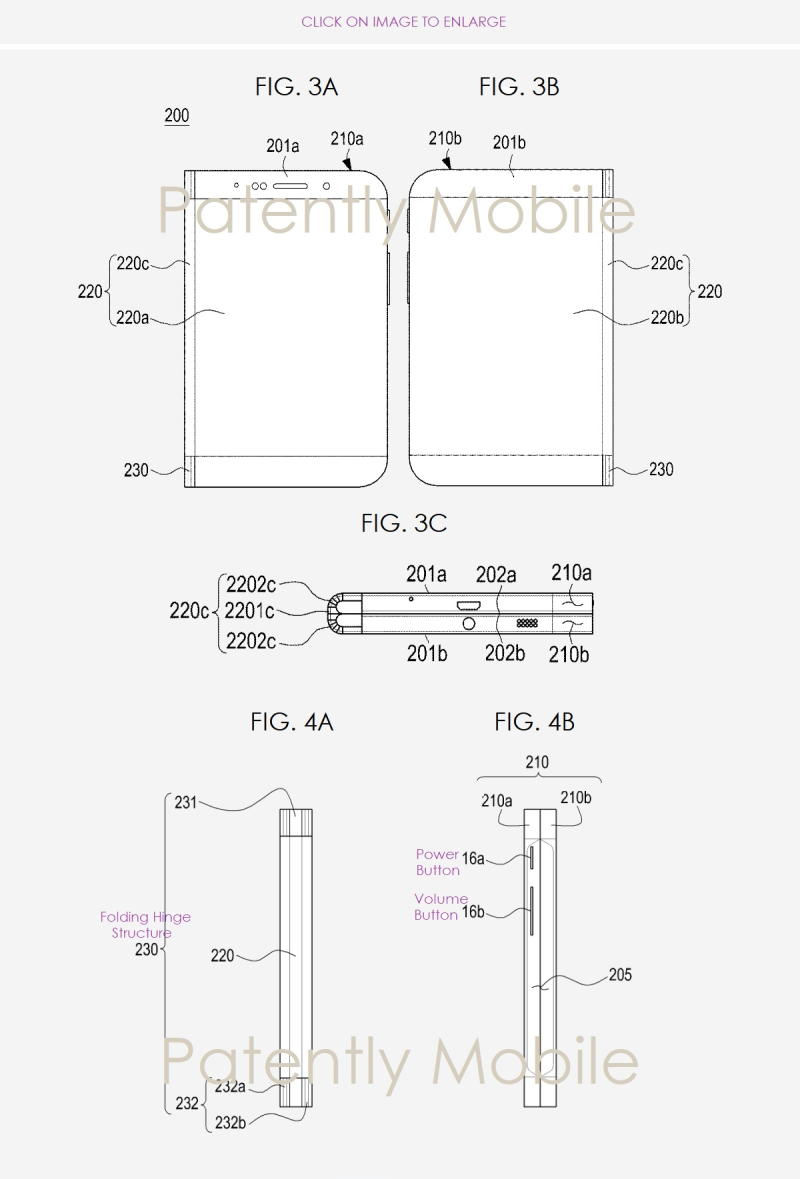 The Foldable Form Factor could be used as many Future Devices

Samsung makes it very clear that the foldable device form factor could be used as a hybrid device that could serve many markets over time. Samsung notes that examples of the electronic device may include at least one of a smartphone, a tablet personal computer (PC), a mobile phone, a video phone, an e-book reader, a desktop PC, a laptop computer, a netbook computer, a workstation, a server, a personal digital assistant (PDA), a portable multimedia player (PMP), a MP3 player, a mobile medical device, a camera, or a wearable device.

According to an embodiment of the present disclosure, the electronic device may be a home appliance. Examples of the home appliance may include at least one of a television, a digital video disk (DVD) player, an audio player, a home automation control panel, a security control panel, a TV box (e.g., Samsung HomeSync, Apple TV, or Google TV, a gaming console (Xbox or PlayStation), an electronic key, a camcorder, or an electronic picture frame, or the like, but is not limited thereto.

The bulk of the patent describes parts and components that will be used in this device such as a specialty hinge, flexible circuitry and more.

Samsung filed their U.S. patent application in April 2018. It was published last week in the U.S.

At around the 4:40 mark of a Marques Brownlee video this week about foldable smartphones he too made the point that the foldable smartphone may sound crazy today but that over time as the concept and technology allows for greater and greater refinement, Samsung could have started another major device and display trend.

One thing is for sure, Apple is continuing to build up their patent portfolio regarding flexible and foldable displays as they see this could be a future trend.

In the end, Apple is likely to sit it out at first and watch how Samsung's folding devices are doing in the market like a guinea pig. If it catches on, they'll jump onboard the trend. In this future market, Apple isn't going to be playing market follower as they did with phablets.

With Samsung taking most of the risks in an attempt to bring a new smartphone category to market, they deserve the applause for not playing it safe and pushing the envelope. In this situation it's Samsung that is Thinking Different, not Apple.