It's being reported today that Apple, Facebook, Alphabet and Amazon will oppose an Australian law that would require them to provide access to private encrypted data linked to suspected illegal activities. The four companies had confirmed their participation in the lobbying effort according to Lizzie O'Shea, a spokeswoman for the Alliance for a Safe and Secure Internet.

Reuters further reports that "Australia in August proposed fines of up to A$10 million ($7.2 million) for institutions and prison terms for individuals who do not comply with a court request to give authorities access to private data.

Seen as test case as other nations explore similar laws, Facebook Inc, Alphabet Inc, Apple Inc and Amazon will jointly lobby lawmakers to amend the bill ahead of a parliamentary vote expected in a few weeks."

Lizzie O'Shea added that "Any kind of attempt by interception agencies, as they are called in the bill, to create tools to weaken encryption is a huge risk to our digital security." You could read more on this here.

In early September Patently Apple posted a report titled "A Five Country Intelligence Group Reveals Groundwork on Gaining Access to Evidence Safeguarded by Encryption." Our report noted that "The groundwork is being prepared by an intelligence alliance known as Five Eyes comprising Australia, Canada, New Zealand, the United Kingdom and the United States, to crack down on technology companies that won't comply with court orders to give up data on local and international criminal and terrorist networks on demand."

The communique released at the end of meeting they collectively stated that "Governments have a responsibility to protect those within our borders against both physical and digital threats, and to ensure that the rule of law prevails online, as it does offline. We have a responsibility to tackle these challenges in a coordinated and effective way." You could read more about this here. 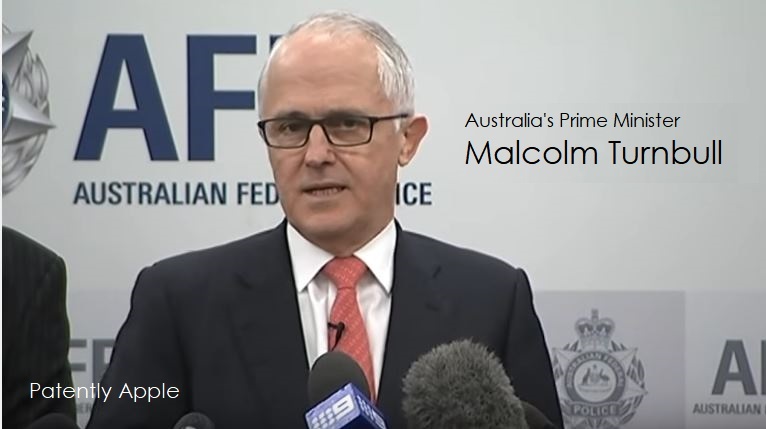 Only time will tell if the citizens of Australia will vote to allow law enforcement to do their jobs as they've done for decades and extend their authority to online activities or allow tech companies to protect their privacy while at the same time protecting organized crime, terrorists and those seeking to do others harm for profit.