Although Samsung launched their Galaxy Note 9 in early August, word is already out that their 2019 Galaxy Note 10 will sport a 6.66" display; a numeric size that might spook evangelicals. Whether that provides us with a glimpse of the display size for their Galaxy S10 that will be unveiled in Barcelona in February is unknown.

Apple made a huge leap with the iPhone XS Max display to 6.5" in September but we're unlikely to ever see a one inch leap ever again on a smartphone. Going forward, Apple, Samsung and the industry have to be cautious as to how large a display a smartphone could be before consumers reject it.

Samsung slowly upgrading their smartphone display by a mere 1.66" illustrates that caution. Samsung owns Samsung Display and could easily leap to 7.5" and truly beat Apple but we see that there's a hesitancy now emerging.

The limit of a smartphone display is probably why there's been so much talk about folding smartphones of late. In order to offer users a larger display, folding a larger display is probably the way to achieve that. Patently Mobile published a new report at the end of September showing four more Samsung patents showing that they have many styles of folding phones on the drawing board with a lot more here.

In June Android Authority posted a report titled "Five ways foldable phones could change the game." The Android community as a whole is pumped for a form factor change and Samsung has got to fill that void before someone else does. China's Huawei has been taunting Samsung that they'll be first to market with a viable folding smartphone soon.

While Apple has several patent-pending folding smartphone concepts on file like the one illustrated above, Apple is likely to have Samsung take the risk with a new smartphone form factor this radical.

Samsung just released their Galaxy A9 with a quad camera system and that feature is likely to move up the line to the Galaxy S10 and Note 10 in 2019. 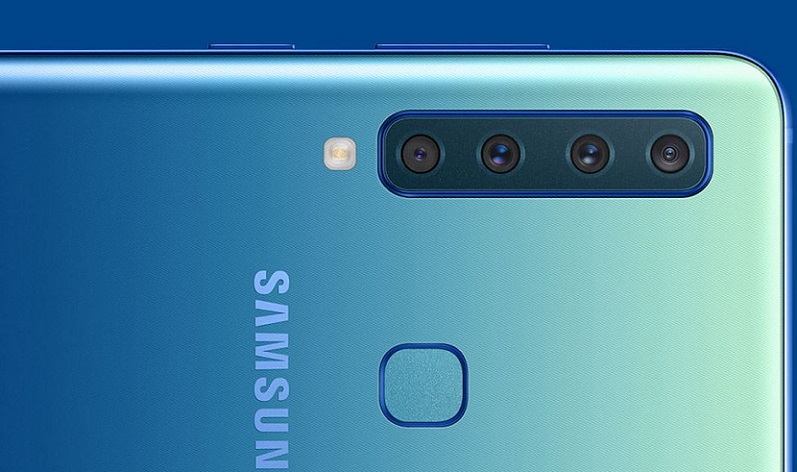 5G Connectivity will be the Killer Feature for 2019 Smartphones

Yet the biggest feature that Samsung fans are hoping to see surface in Samsung's top of the line smartphones is an X50 5G modem from Qualcomm or a custom chipset of their own. Qualcomm's X50 modem chipset is due out in the first half of 2019. Most hope Samsung will lead the way.

To get their fans pumped up, Samsung and SK Telecom (SKT) announced today that they have completed a joint project to make the first 5G call in Korea, kicking it up a notch in the race to commercialize the next-generation service.

Completing the first call is a step to test whether data transactions can be done without a hitch before commercialization.

Their first 5G call, utilizing the new 3GPP 5G radio standards and 3.5GHz spectrum, was made at SKT's laboratory in Bundang, Gyeonggi Province.

The companies said they will try to test run their 5G technology on the field soon to make sure the service properly works in any environment.

Global telecom companies and network equipment makers have completed their own first 5G call, but the two Korean companies claimed their technology is one of the closest to commercialization.

"I believe SKT is months ahead of other rivals in the 5G race as it has moved fast to conduct research and development projects, pick equipment partners and complete the first call," said Park Jin-hyo, chief of SKT's ICT R&D Center.

Among the companies that aim to take the lead in commercialization of the 5G network are Huawei, Ericsson, Qualcomm, and Vodafone.