Home Archives Contact Us Subscribe Twitter Facebook MeWe Parler Patently Mobile
Samsung Seeks to get an Advantage over their Aggressive Chinese Competitors and Apple in 2019 with 5G and a Folding Phone
The FBI's Cybercrime Report shows that 1.4 Million Americans have filed Complaints since 2013 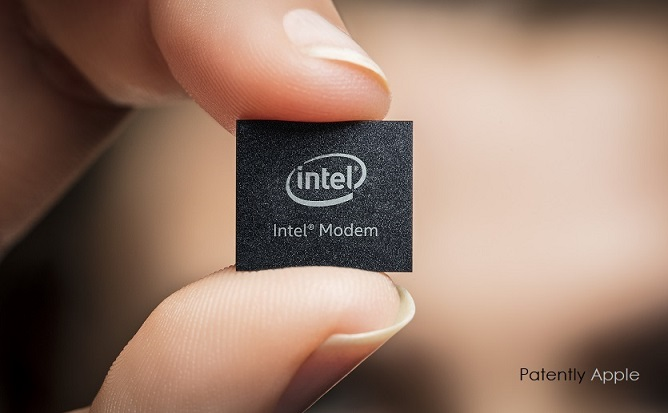 Intel Corp beat analysts’ estimates for quarterly profit and revenue on Thursday, driven by its high-margin data center business and strong demand for its PC chips, sending its shares up as much as 6.0 percent in extended trading, though those gains later evaporated on concerns about U.S. trade tensions with China.

Reuters report notes that "Intel bucked the trend thanks to strong sales of chips for PCs, the second quarter in the row the company benefited from the sector after years of stagnation in that business, and increasing sales of iPhone modem chips.

Intel further noted that boosting their sales this quarter was its business for modems, which was up 131 percent in the quarter. The gain resulted from Intel completely replacing rival modem supplier Qualcomm in the most recent iPhone models.

Intel's Interim Chief Executive Bob Swan added that "what the modems and memory do for the company is allow us to play in a much larger market."

The company’s 39 percent rise in profits and better-than-expected fourth-quarter forecast should come as a relief for investors after three days of grim news from other major chipmakers that have shaken stock markets globally."

With news that AMD will be announcing their next-gen 7nm processors while Intel continues to struggle to deliver 10nm processors, the news may be different in January if AMD announces early release of their 7nm processors for consumer and business desktops, notebooks and servers.

Being optimistic, Intel executives do not see any near-term weakness from the trade tensions or Chinese economy, despite the fact that large data center customers like Baidu Inc and consumer PC factories are located there.

Interestingly the report touched on Intel's "Optane Memory" business indirectly by noting that Intel recorded a $290 million charge as a result of Micron Technology Inc’s decision to buy out Intel’s portion of a memory fabrication plant in Utah where the two had partnered to build advanced memory chips, a move analyst Patrick Moorhead of Moor Insights & Strategy called "negotiation tactics." He expects the two to find a way to work together.

Intel’s Swan told Reuters that Intel has retained its rights to the technology and intends to eventually build its own factories to produce the chips.

“Despite their [Micron's] announcement, we will still have access to supply from the fab for the next 18 to 24 months, and that will give us time to explore the alternatives we have to produce the product,” Swan said.

For more on this, read the full Reuters report here.