Home Archives Contact Us Subscribe Twitter Facebook MeWe Patently Mobile
Apple continues their work on a Travel App, even if it's at a glacial pace
Apple's October 30th Event at the Brooklyn Academy of Music in New York is likely to introduce the sexy new iPad with Face ID 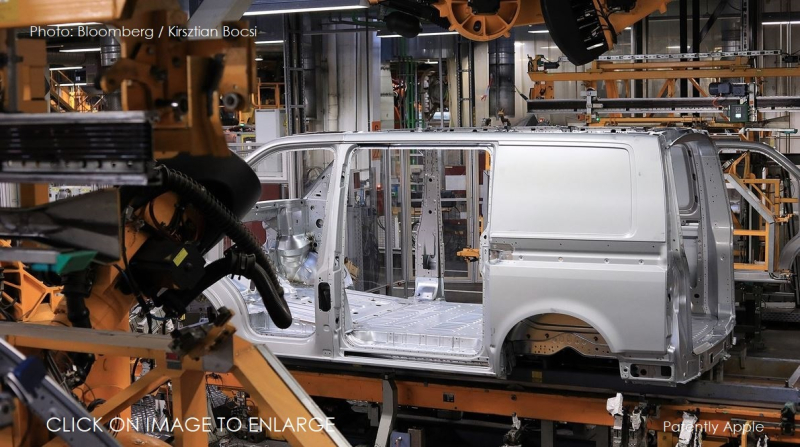 Back in May Patently Apple posted a report titled "Apple's Autonomous Shuttle Service will use Volkswagen Vans." This is where Apple's Project Titan is starting – with autonomous or semi-autonomous vehicles. Apple also uses Lexus vehicles for various projects like mapping that may or may not be part of Project Titan.

Sports cars and the like have never been on Apple's radar, patent wise. Apple's van now in the works would suggest that Apple is looking to corporate vehicles and/or Airport rentals.

According to Apple, vehicles, including electric or hybrid vehicles and other devices are generally powered by a high voltage battery or other high energy store. However, such vehicles and devices typically include components or subsystems, such as battery controllers, motor controllers, air conditioning systems, and the like, operating at a relatively lower voltage.

Conventionally, a converter down converts the high voltage powering the vehicle or device to the lower voltage at which these components and subsystems operate.

Such conventional converters are often inefficient and suffer from load transients that are absorbed by and may cause damage to a low voltage battery.

Apple's invention introduces a solution to this problem.

Apple's invention involves systems and methods for supplying voltage to a load. In one aspect, a converter, such as a direct current-to-direct current ("DC-to-DC") converter, converts a relatively higher direct current voltage of a high energy store to a relatively lower direct current voltage utilized by lower voltage loads. For instance, a vehicle or other device typically includes a high energy store, such as a high voltage battery, providing motive current to one or more electric drive motors. The vehicle or device may also include lower voltage components, including, but not limited to, electric power steering systems, navigation systems, dashboard systems, and/or the like, that operate at a lower voltage than the drive motor(s).

Apple notes at one point in their patent filing that "In one implementation, the system is configured for the recovery operational mode wherein a charge state of the LV (Low Voltage) battery is depleted or otherwise below a nominal level. For example, the system includes one or more loads, such as an air conditioning system, entertainment system, navigation system, and/or other vehicle subsystems or components. If the loads operate for any extended time while only drawing power from the LV battery, the LV battery may become depleted. In the recovery operational mode the system recharges the LV battery until the charge state reaches the nominal level.

Apple's patent FIG. 4 illustrated below is a flowchart of example operations for providing a load voltage supply using a combination of an unregulated DC-to-DC converter for powering a bus and a regulated converter for charging or sourcing current from a low voltage battery system. 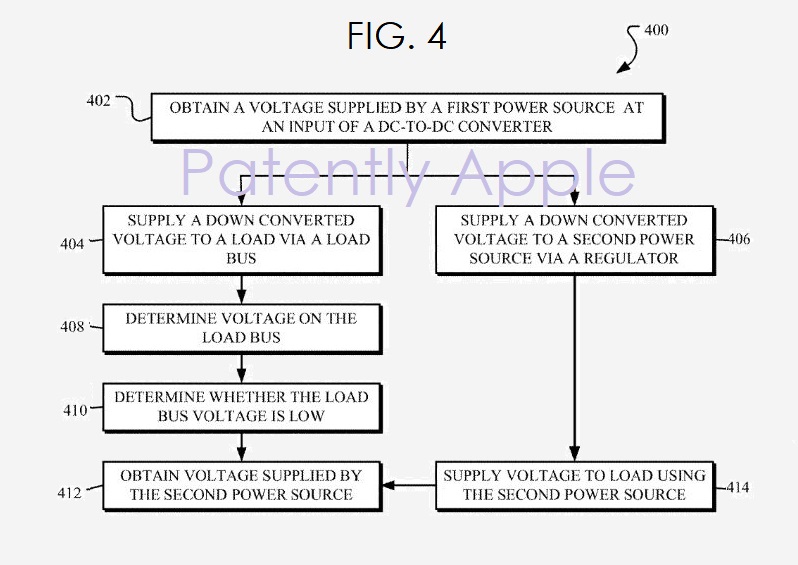