Bloomberg Businessweek has published an explosive report about "The Big Hack," how China used a tiny chip to infiltrate America's top companies. It goes on newsstands on October 8. 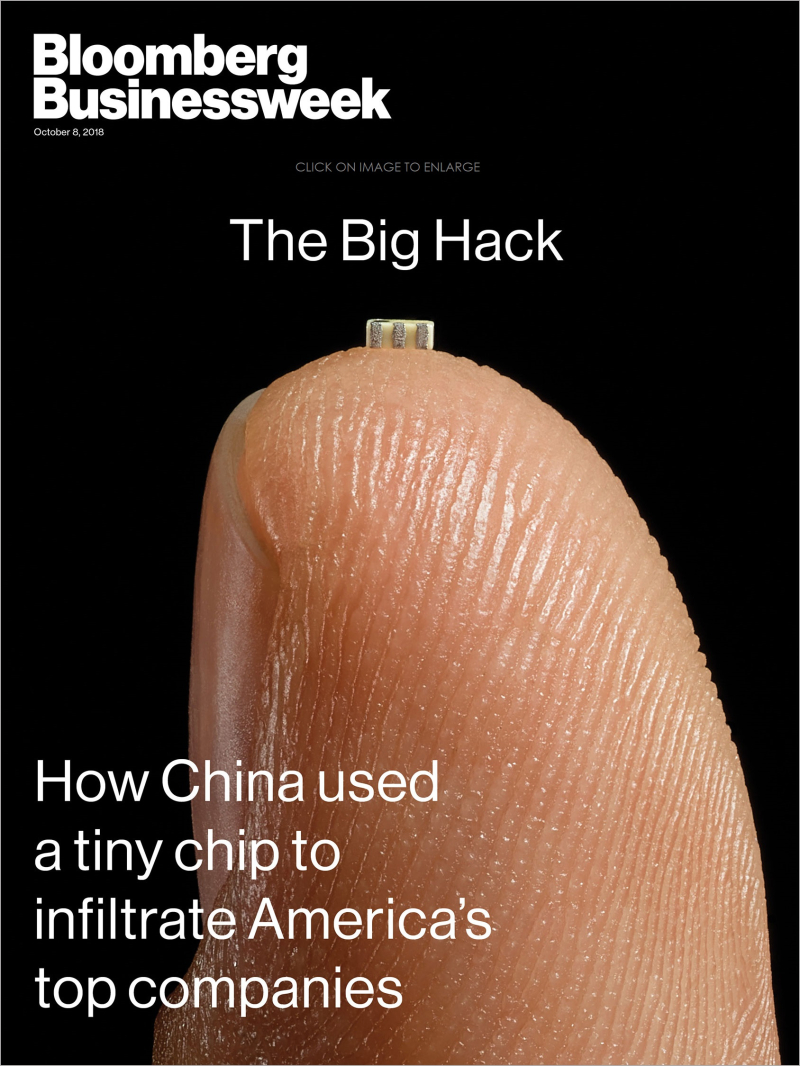 Bloomberg Businessweek: "In 2015, Amazon.com Inc. began quietly evaluating a startup called Elemental Technologies, a potential acquisition to help with a major expansion of its streaming video service, known today as Amazon Prime Video. Based in Portland, Ore., Elemental made software for compressing massive video files and formatting them for different devices. Its technology had helped stream the Olympic Games online, communicate with the International Space Station, and funnel drone footage to the Central Intelligence Agency. Elemental's national security contracts weren't the main reason for the proposed acquisition, but they fit nicely with Amazon's government businesses, such as the highly secure cloud that Amazon Web Services (AWS) was building for the CIA.

To help with due diligence, AWS, which was overseeing the prospective acquisition, hired a third-party company to scrutinize Elemental's security, according to one person familiar with the process. The first pass uncovered troubling issues, prompting AWS to take a closer look at Elemental's main product: the expensive servers that customers installed in their networks to handle the video compression. These servers were assembled for Elemental by Super Micro Computer Inc., a San Jose-based company (commonly known as Supermicro) that's also one of the world's biggest suppliers of server motherboards, the fiberglass-mounted clusters of chips and capacitors that act as the neurons of data centers large and small. In late spring of 2015, Elemental's staff boxed up several servers and sent them to Ontario, Canada, for the third-party security company to test, the person says.

Nested on the servers' motherboards, the testers found a tiny microchip, not much bigger than a grain of rice, that wasn't part of the boards' original design. Amazon reported the discovery to U.S. authorities, sending a shudder through the intelligence community. Elemental's servers could be found in Department of Defense data centers, the CIA's drone operations, and the onboard networks of Navy warships. And Elemental was just one of hundreds of Supermicro customers.

During the ensuing top-secret probe, which remains open more than three years later, investigators determined that the chips allowed the attackers to create a stealth doorway into any network that included the altered machines. Multiple people familiar with the matter say investigators found that the chips had been inserted at factories run by manufacturing subcontractors in China.

This attack was something graver than the software-based incidents the world has grown accustomed to seeing. Hardware hacks are more difficult to pull off and potentially more devastating, promising the kind of long-term, stealth access that spy agencies are willing to invest millions of dollars and many years to get."

In Respect to Apple

Bloomberg Businessweek: "One country in particular that has an advantage executing this kind of sophisticated attack is China, which by some estimates makes 75 percent of the world's mobile phones and 90 percent of its PCs.

Still, to actually accomplish a seeding attack would mean developing a deep understanding of a product's design, manipulating components at the factory, and ensuring that the doctored devices made it through the global logistics chain to the desired location—a feat akin to throwing a stick in the Yangtze River upstream from Shanghai and ensuring that it washes ashore in Seattle.

Joe Grand, a hardware hacker and the founder of Grand Idea Studio Inc: 'Having a well-done, nation-state-level hardware implant surface would be like witnessing a unicorn jumping over a rainbow. Hardware is just so far off the radar, it's almost treated like black magic.'

But that's just what U.S. investigators found: The chips had been inserted during the manufacturing process, two officials say, by operatives from a unit of the People's Liberation Army. In Supermicro, China's spies appear to have found a perfect conduit for what U.S. officials now describe as the most significant supply chain attack known to have been carried out against American companies.

One official says investigators found that it eventually affected almost 30 companies, including a major bank, government contractors, and the world's most valuable company, Apple Inc. Apple was an important Supermicro customer and had planned to order more than 30,000 of its servers in two years for a new global network of data centers.

Three senior insiders at Apple say that in the summer of 2015, it, too, found malicious chips on Supermicro motherboards. Apple severed ties with Supermicro the following year, for what it described as unrelated reasons.

An email statement from Apple denies the report by stating "On this we can be very clear: Apple has never found malicious chips, 'hardware manipulations' or vulnerabilities purposely planted in any server.'

Yet the Bloomberg report added that "In addition to the three Apple insiders, four of the six U.S. officials confirmed that Apple was a victim. In all, 17 people confirmed the manipulation of Supermicro's hardware and other elements of the attacks. The sources were granted anonymity because of the sensitive, and in some cases classified, nature of the information.

Further, Bloomberg noted that "Apple made its discovery of suspicious chips inside Supermicro servers around May 2015, after detecting odd network activity and firmware problems, according to a person familiar with the timeline. Two of the senior Apple insiders say the company reported the incident to the FBI but kept details about what it had detected tightly held, even internally."

In addition, Bloomberg's report stated that "Apple, for its part, has used Supermicro hardware in its data centers sporadically for years, but the relationship intensified after 2013, when Apple acquired a startup called Topsy Labs, which created superfast technology for indexing and searching vast troves of internet content. By 2014, the startup was put to work building small data centers in or near major global cities. This project, known internally as Ledbelly, was designed to make the search function for Apple's voice assistant, Siri, faster, according to the three senior Apple insiders.

Documents seen by Businessweek show that in 2014, Apple planned to order more than 6,000 Supermicro servers for installation in 17 locations, including Amsterdam, Chicago, Hong Kong, Los Angeles, New York, San Jose, Singapore, and Tokyo, plus 4,000 servers for its existing North Carolina and Oregon data centers. Those orders were supposed to double, to 20,000, by 2015. Ledbelly made Apple an important Supermicro customer at the exact same time the PLA was found to be manipulating the vendor's hardware."

Explosive stories like this don't come around often so be sure to read the full Bloomberg Businessweek report here when you have the time.

Although Apple has denied the story, the facts as presented by Bloomberg Businessweek would make it that Apple is in denial. Apple prides itself on privacy issues and protecting their customer data, so admitting to the events as laid out in Businessweek report would be damaging to their image.

Yet Apple is standing fast telling CNBC: "We are deeply disappointed that in their dealings with us, Bloomberg's reporters have not been open to the possibility that they or their sources might be wrong or misinformed. Our best guess is that they are confusing their story with a previously reported 2016 incident in which we discovered an infected driver on a single Super Micro server in one of our labs. That one-time event was determined to be accidental and not a targeted attack against Apple."