According to a new survey by Blind, the anonymous community app for the workplace, 58% of tech workers in silicon valley and the tech hub in the Washington State claim that they have to delay having a family due to the high cost of living. Apple employees were recorded as the highest in tech land to agree with that question on the survey. 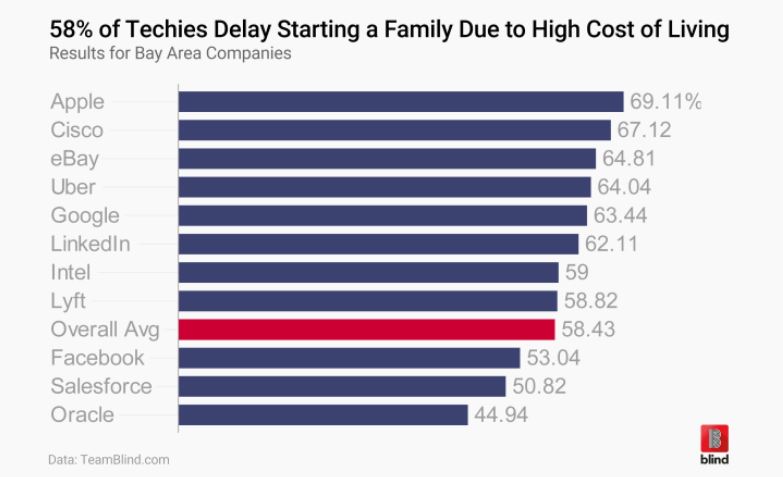 Company-specific results for this survey didn't stray far from the overall average. Above are the final results for 14 tech companies that summed up with the most survey responses. The percentages listed for each company represent employees who delayed building a family.

Apple has the highest percentage of employees who say they have delayed starting a family due to high cost of living (69.11 percent) while Oracle has the least (44.94 percent).

College tuitions, home prices, and health insurance premiums have increased at a faster rate. The cost of raising a child is also higher than ever. Parents will spend between 9 and 22 percent of their annual income on child care for every child. As of 2015, the average cost of raising a single child until age 17 was $233,610.

The report claims that buying a home and raising a family in the Bay Area is completely out of reach for many residents. Even tech workers earning large salaries at Google or Apple are struggling to build roots in the area.

The survey results only show us a small slice of America. I'm sure that most Americans outside of the Bay Area don't really care about the woes of highly paid tech workers. Yet in context, the Blind app is focused on what technology workers in general are thinking on a number of topics. Below is a sample list of other surveys conducted by Blind.

01: 65 Percent of Google Employees Are in Favor of Censored Search in China.

02: Tech Workers Say Poor Leadership Is Number One Cause for Burnout

03: 15 Percent of Tech Workers Silenced by an NDA

05: Top 3 Pros and Cons of Being a Contract Worker in Tech