The Android World Continues to Hammer away at the iPhone XS Max's lower Battery Life than Huawei, Samsung & even OnePlus 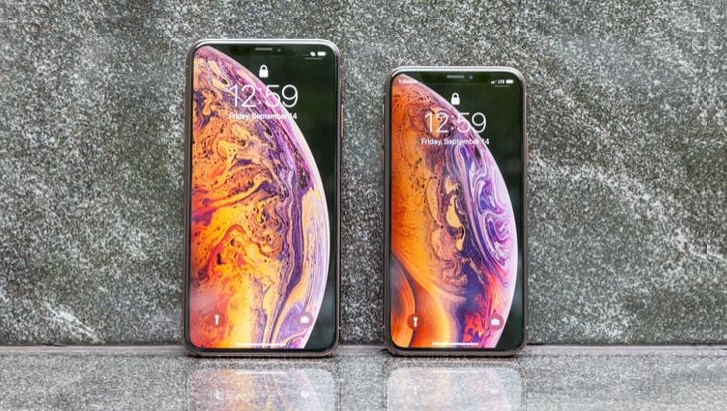 As iPhone fans in Singapore waited in a lineup overnight to get their hands on the new iPhone XS Max and other new iDevices, Huawei was out to make a marketing point that that the new iPhones had a tiny battery that far below the capacity available on their P20 Pro. Although an iPhone battery life is important to Apple fans, as our report pointed out in chart form, the iPhone camera and superior display are the big features that Apple fans happen to be interested in.

Days after the new iPhones have been out, the battery issue continues to play out in techland. One of the latest smartphone battery tests was performed by Tom's Guide.

Their report noted that "If you really care about battery life and you're in the market for a new iPhone, we would opt for the iPhone XS Max over the iPhone XS. Apple's 6.5-inch flagship lasted nearly an hour longer on a charge than its smaller, 5.8-inch sibling.

We put the iPhone XS and XS Max through the Tom's Guide Battery Test, which involves continuous web surfing at 150 nits of screen brightness. For this test, we turn Auto-Brightness off and True Tone off in the display settings.

To ensure consistency, we run all of our phone battery tests on T-Mobile's network, and we ensure that the phones have full signal strength by using a signal booster called the T-Mobile 4G LTE CellSpot. In other words, this is as close to ideal conditions as we can get while keeping everything repeatable. 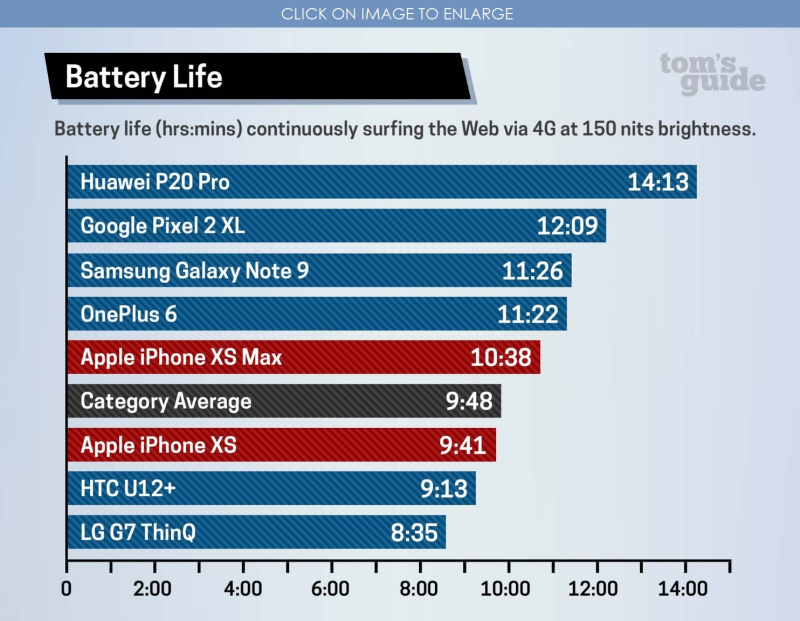 The iPhone XS Max turned in a run time of 10 hours and 38 minutes, which is well above the smartphone category average of 9:48. However, the iPhone XS lasted for just 9:41, which is slightly below the average. Last year's iPhone X lasted 10:49 on the same test, despite claims from Apple that the iPhone XS was supposed to last 30 minutes longer.

Based on a recent teardown, the iPhone XS has a relatively small battery compared to most Android phones, at 2,659 mAh, which is smaller than the 2,716-mAh battery in last year's iPhone X. The iPhone XS reportedly packs a beefier, 3,179-mAh battery, but that's still less than what most Android flagships have, ranging from 3,500 to 4,000 mAh." You could read more about Tom's Guide report here.

In a minor way it gets embarrassing when the $529 OnePlus 6 smartphone and last year's Google Pixel 2 XL beats out the iPhone XS Max for battery life. And though it's not on the chart, the fact is that last year's iPhone X had slightly better battery life technically.

Although the bombastic Lewis Hilsenteger of Unboxed Therapy is not the biggest Apple fan out there, he has temporarily switched to the iPhone XS Max for testing purposes. Hilsenteger pointed out this week in one of his video reports that Apple is playing games with their battery life description by never spelling out the iPhone's capacity on their tech specs page. Instead Apple uses marketing lingo like: "Lasts up to 30 minutes longer than iPhone X" (when Tom's Guide shot that down) or "Lasts up to 1.5 hours longer than iPhone X." On that point he's technically correct.

Apple knows that they have one the smallest smartphone batteries in the industry. Considering that the iPhone XS Max is the top priced premium smartphone today, Apple apparently has cut corners.

With all this noise spent on the less than stellar iPhone XS Max battery, perhaps Apple will get the point that it's a distraction to be so far behind their top competitors smartphones at lower price points and finally address the battery issue next year so that the 2019 iPhones land in the top 3 spots.

While there's more to a smartphone than just battery life, we know that Apple is likely to introduce Mobile TV in the coming year and battery is going to matter big time on iDevices at that point in order to make that a popular feature / service.