Home Archives Contact Us Subscribe Twitter Facebook MeWe Parler Patently Mobile
Regardless of the Cost, Nearly Half of iPhone Users Will upgrade to the new 2018 Models being Introduced Today
Apple's iPhone X is on Track to be the Most Successful Revenue and Profit Generating iPhone Ever

Beyond the iPhone, Apple's Service are gaining Steam and could be their #2 Revenue Source by 2021

When people think of Apple, they think of hardware first. The MacBook, the iPod and the iPhone in particular – those are the products that have made Apple what it is today: the most valuable company in the world.

Over the past few years however, another part of Apple's business has quietly overtaken all but one of the above. Apple's services segment accounted for $30 billion in revenue in Apple's fiscal 2017 (which ended September 30, 2017), making it the second largest contributor to overall sales behind the company's cash cow, the iPhone, which accounted for 62 percent of total sales. 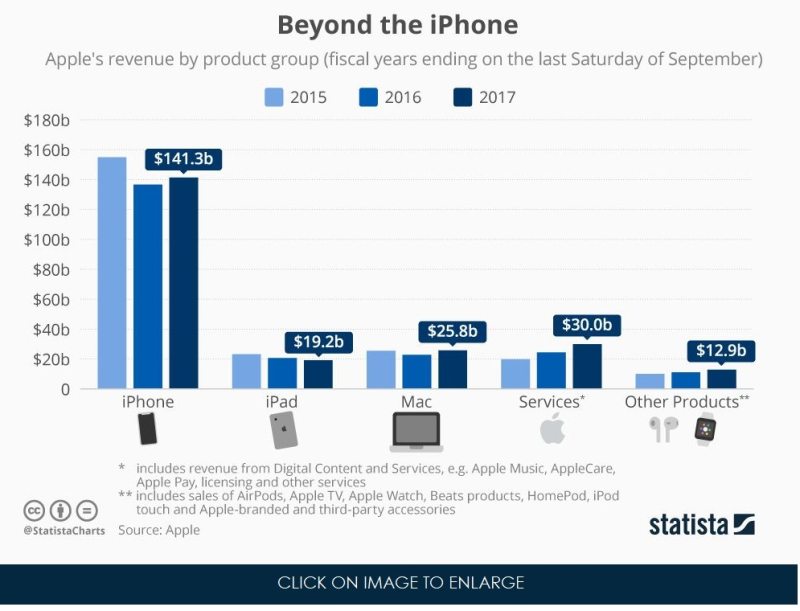 With Apple Music, Apple Pay, iTunes and the App Store as well as iCloud and Apple Care, Apple's services business has become a beast of its own in recent years, nearly doubling from $16.1 billion in sales in 2013 to $30 billion last year.

The company's ambitions go much further than that though, as Apple executives have said they plan to hit a target of $50 billion in services revenue by 2021 which could match or surpass iPad and Mac sales combined today. And with Apple's Worldwide Video service likely to launch next year, Apple services will be the number two profit sector for Apple by 2021.

In February, Tim Cook's Summary for Q1 2018 touched on services in-part this way:

"It was another very strong quarter for services with revenue of $8.5 billion up 18% over last year and we're on pace to achieve our goal of doubling our 2016 services revenue by 2020. The number of paid subscriptions across our services offerings passed 240 million by the end of the December quarter. That's an increase of 30 million in the last 90 days alone which is the largest quarterly growth ever."

Cook added that "In Addition to the App Store, several other services had their biggest quarter ever including Apple music, iCloud and Apple Pay all of which saw growth in both active users and revenue."