Home Archives Contact Us Subscribe Twitter Facebook MeWe Parler Patently Mobile
Beyond the iPhone, Apple's Service are gaining Steam and could be their #2 Revenue Source by 2021
Qualcomm to Face new Antitrust Investigation into German iPhones using Intel Chips by the European Commission

Cumulative shipments for iPhone X reached 63 Million units by end of Aug 2018 which is lower than the iPhone 6 for similar period since launch but on track to be the most successful revenue and profit generating iPhone ever.

Apple's iPhone X has helped Apple to achieve a revenue super-cycle instead of a volume super-cycle. As shown in the chart below, cumulative shipments of iPhone X reached 63 million units within ten months of its launch ending August 2018. By comparison, during the iPhone 6 Super Cycle, Apple took only six months to achieve similar volume, post 2014 launch. 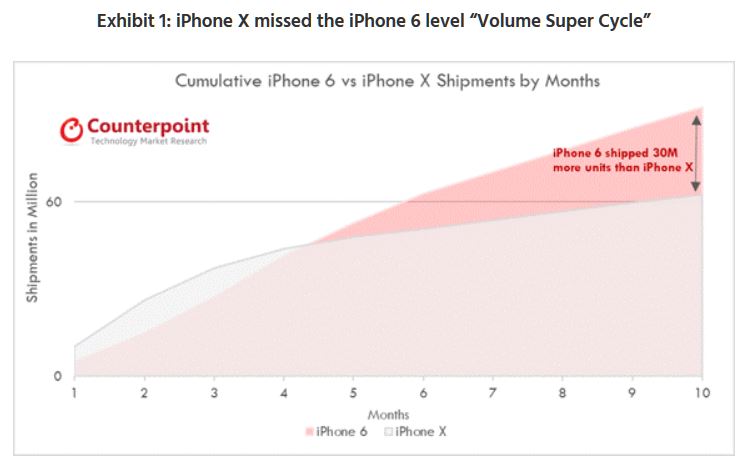 However, iPhone X which drove a completely radical new design language helped Apple to command a significantly higher Average Selling Price (ASP) at a point when the overall smartphone market was beginning to saturate.

So, while the fabled volume super-cycle has not materialized, Apple has actually delivered a revenue super-cycle, posting record iPhone revenues and Average Selling Prices (ASPs) since the iPhone X launch. Both iPhone 6 and iPhone X generated almost similar revenues of USD 62 Billion across a similar period (first 10 months). iPhone X is therefore also a factor in Apple becoming the first trillion-dollar company. The iPhone X has been well received in the US market with demand reaching an all-time high during the initial months of launch. It was even the #1 best selling model in many developed markets for the initial couple of quarters.

However, demand in China only picked-up later, after the New Year, thanks to promotions and offers. Demand for the expensive iPhone X was modest in most of the emerging markets where older-generation iPhones remain popular. iPhone X shipments have been skewed towards traditionally stronger iPhone markets like USA, Japan, China, which contributed to almost two-thirds of the total iPhone X shipments. However, in markets outside China, iPhone X did well despite the high price-tag, remaining popular across developed markets like the USA, Japan and parts of Western Europe. So while iPhone X didn't help Apple to substantially grow its user base, it handsomely contributed to both the top and bottom line, and Apple's market cap. It is therefore hard to deem iPhone X a failure.

It took iPhone X ten months to cross 60 million shipments but iPhone 6 was the fastest model so far to achieve the same feat in six months from launch.

For Apple, iPhone X contributed to almost one third of the total iPhone shipments and half of total iPhone revenues since launch.

USA and China alone contributed to more than half of the total iPhone X shipments.

Revenue of iPhone X alone was higher than each of the top five smartphone brands (Huawei, OPPO, Vivo and Xiaomi) except Samsung in the past ten months.

Expectation is that Apple will command even higher average selling price (ASP) with the rumoured three new iPhone launches this time.

With the introduction of a cheaper LCD model and higher-priced OLED models, the iPhone mix for Apple is likely to drive even more revenue as it enters a refreshed product cycle.