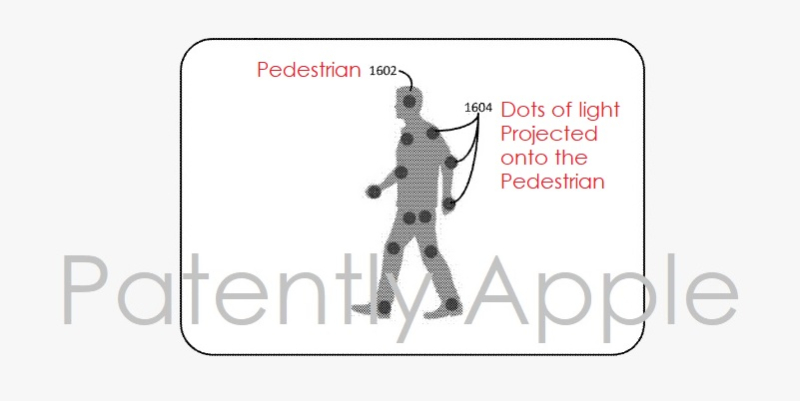 Today the US Patent & Trademark Office published a patent application from Apple that relates to Project Titan. More specifically, the invention relates to the reinvention of a headlight system from a basic light bulb system to a smart, machine learning based system that could recognize specific object to highlight to provide drivers with better vision at night and especially during times of fog and/or rain. The system is also able to recognize humans at a distance by projecting dots of light onto subjects much like Apple uses a dot projector for Face ID but on a massive scale. Apple also notes that in some applications, a live Windshield system in the form of a HUD may be used instead of relying on a lighting system alone.

Many governing bodies require headlights to be installed and operational on many types of vehicles, such as automobiles, bicycles, trains, aircraft, and the like. Typically, the headlight is attached to the front of the vehicle and shines a uniform light onto the road or other surface in front of the vehicle. Many headlights utilize a light source (such as a light bulb) placed near the focus of a reflector of parabolic shape that reflects the lights through a forward-facing lens to guide the light beam to illuminate the road surface in front of the vehicle. Further, some headlight constructions may include a low beam setting and a high beam setting. However, traditional headlights often fail to properly illuminate the scene in front of the vehicle in particular circumstances, such as rural roads with little to no street light presence and in rainy or foggy conditions. It is with these and other issues in mind that various aspects of the present disclosure were developed.

Another implementation of the present disclosure may take the form of a method for controlling a contrast in an illuminated scene.

The projection may be utilized to highlight particular areas within the field of illumination of the headlight. For example, the light source may be oriented or otherwise controlled to highlight a detected object in or near the path of travel of a vehicle.

Such objects may include potential obstacles in the roadway in front of the vehicle, objects or beings off the road with the potential for entering the vehicle's path of travel, notable conditions of the road, and the like.

The portions of the field of view with a higher contrast or with more light projected onto them may be determined from information received about the field of view of the headlight from one or more sensors. Further, in one embodiment, the high contrast portions may also be selectable by a user of the vehicle based on the user's preferences. Through the control of the headlight system, an enhanced viewing experience for a user or driver of the vehicle may be obtained to increase the enjoyment and ease of the operation of the vehicle by the driver. As shown in graph #1408, the illumination is low on the portions of the road that are black and higher on the lane marker. 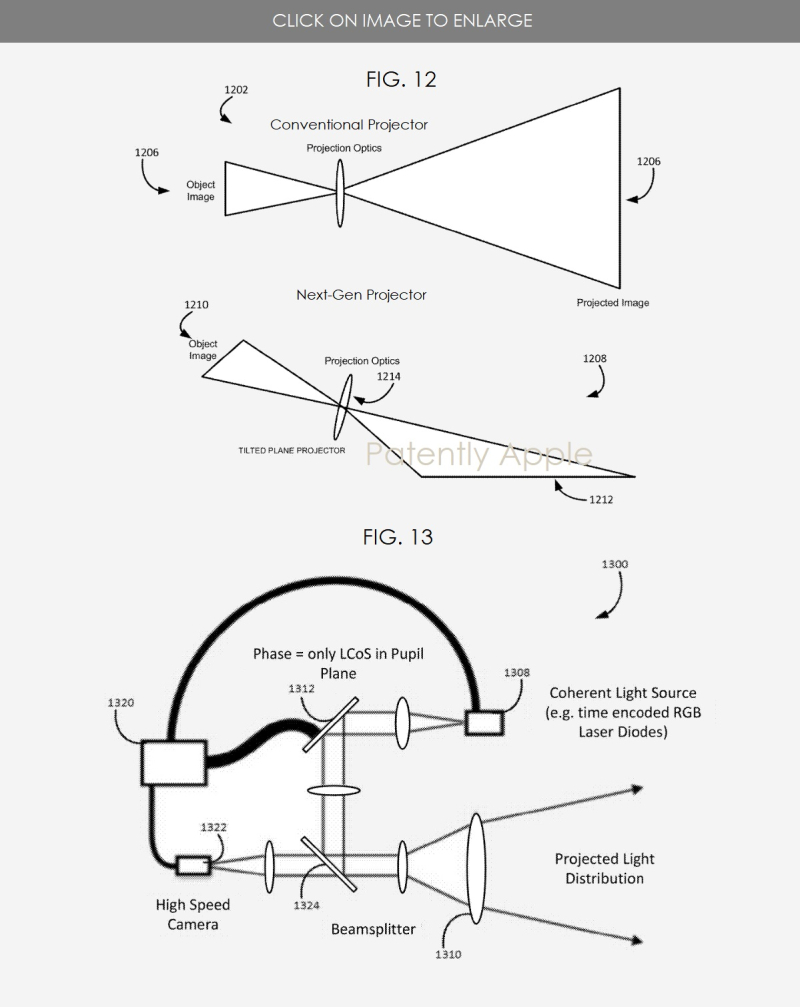 Apples patent FIG. 6 below is a diagram illustrating projecting an image with a contrast control feature on a plurality of portions of the field of view of the headlight. 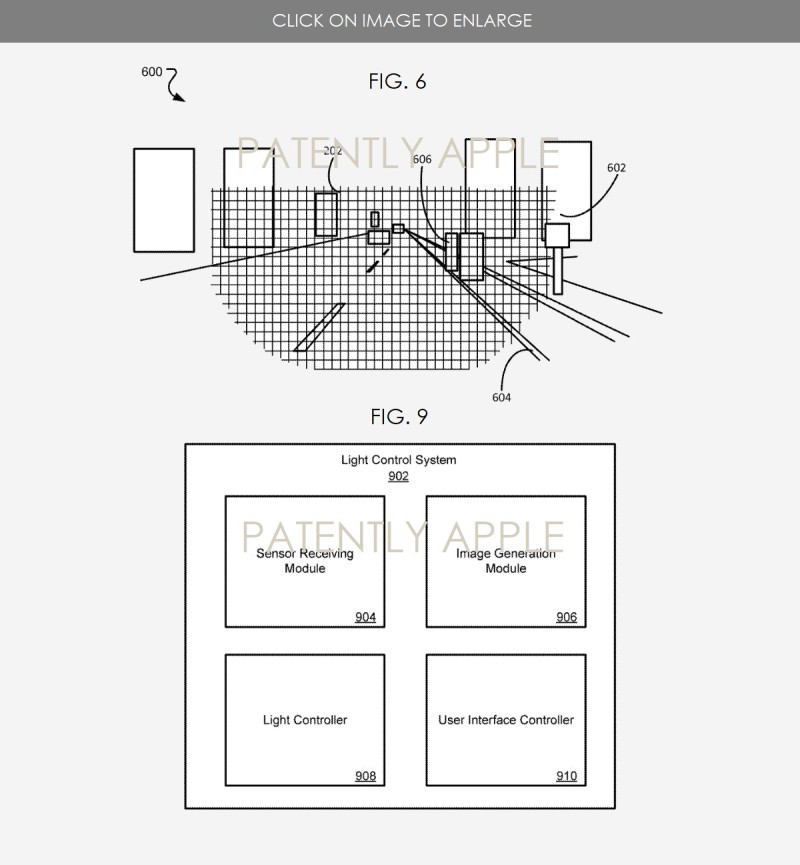 Apple's patent FIG. 5 below is a diagram illustrating projecting an image into a field of view of a vehicle to aid a driver in operating the vehicle. 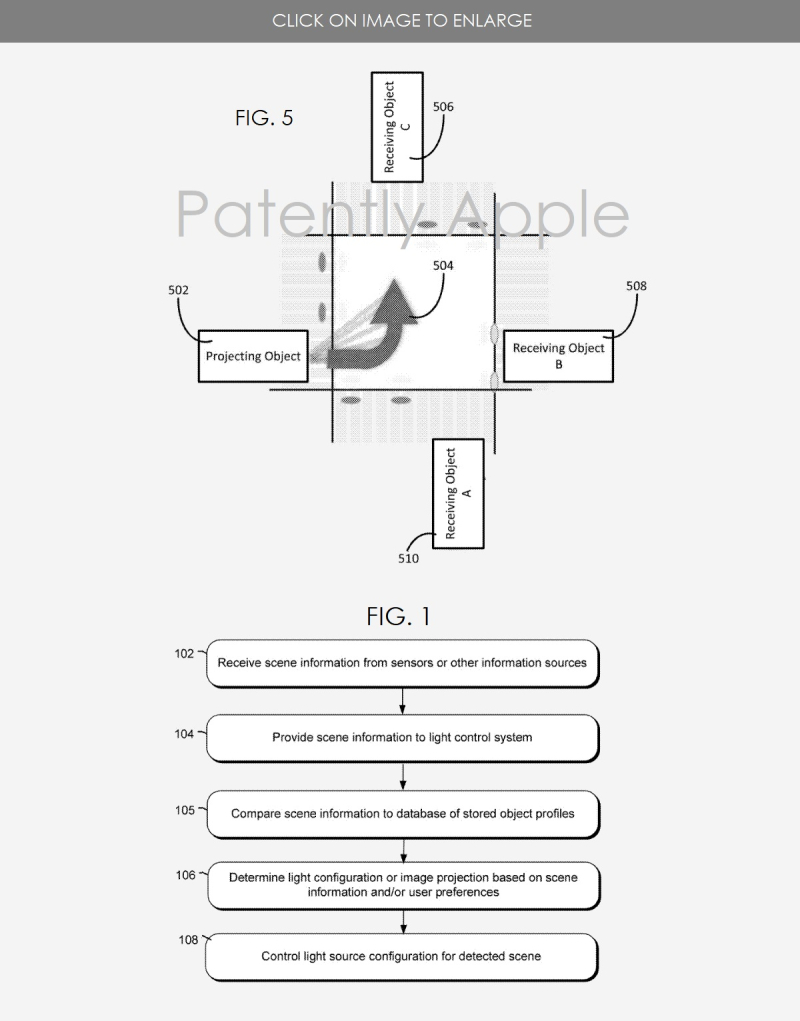 Apple's patent FIG. 1 is a flowchart of a method for adjusting a headlight of a vehicle based on information received from one or more sensors.

In today's published patent application, Apple notes that the response to a detected object or other light projection circumstance described above may not involve a projected light or image from a headlight. Rather, an image or light may be projected onto a heads-up display (HUD) visible by the driver of the vehicle.

For example, images and other information may be projected onto the interior or exterior surface of the windshield of the vehicle.

In another example, the HUD may be a helmet or other wearable device that includes a surface onto which an image may be projected or shown. In this embodiment, when an object is detected by the system, the object may be highlighted on the HUD as the driver is looking through the HUD at the object. This aspect of the invention relates to a more in-depth patent application that we covered back in March titled "Patent of the Decade: Apple Reveals an Unbelievable VR Experience System for Next-Gen Autonomous Vehicles."

Apple's patent application was filed back in May 2018 and published today by the U.S. Patent and Trademark Office. Considering that this is a patent application, the timing of such a product to market is unknown at this time.

No, there's no mention of a plane except for the context of a "focal plane." No, there's no bike. The context is "pedestrian or biker." And for boat, the word doesn't even appear in the patent application at all.

The byline from AppleWorld.Today covering this patent was simply to attract clicks. It's dishonest and completely unprofessional to invent a misleading byline.