Home Archives Contact Us Subscribe Twitter Facebook MeWe Parler Patently Mobile
The Top 10 Grossing iPhone Apps in the U.S. for August
While Luxury Brands Apple and Adidas Battle it out with new Product Launches Friday, my Money is on Apple being the Victor 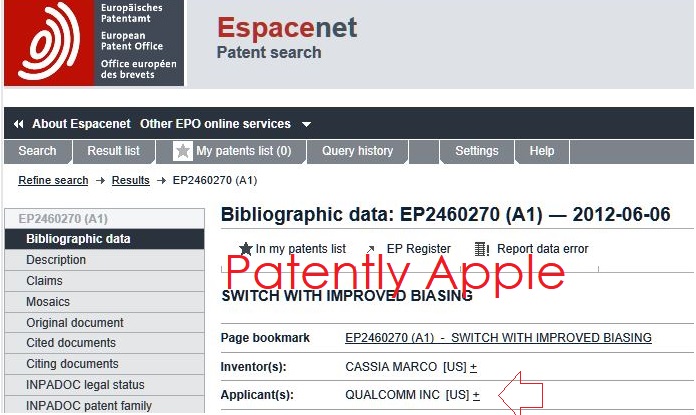 Mueller described the Apple v. Qualcomm case the commercially biggest patent-related dispute ever and could be truly seen as the World Series of IP cases.

Apple is trying to invalidate Qualcomm's patent titled "Switch with Improved Biasing" in this Mannheim case based on an expert opinion from Sweden.

Mueller wrote: "The potential silver bullet here is that Apple had submitted the original patent and its proposed combination of prior art references (which are, according to Apple, also at the heart of its German nullity complaint pending with the Munich-based Federal Patent Court) to the Swedish Patent & Registration Office ("PRV"), and received an expert opinion from an examiner according to which the patent-in-suit does lack an inventive step in light of the prior art."

There will be a formal post-trial brief for which Apple was granted leave, and a legal brief (no new facts) which Qualcomm announced. The court will announce a decision on December 4, 2018. That one could be a final ruling, a stay, or whatever other procedural order.

For more on Mueller's sense of the key points made in the case battled out in the Mannheim Court yesterday, read his full report here.

Mueller pointed out in his second report that Dr. Hufnagel, Apple's antitrust counsel, "explained to the court that the analysis should be holistic, taking into consideration the entirety of Qualcomm's conduct, which he described--using this exact English term--a "grand evil scheme" involving different actions and measures such as exclusivity rebates for customers/licensees, the refusal to license rival chipset makers, and a multiplicity of patent assertions in different jurisdictions."

Though at the end of Mueller's report his position was that "Without a holistic assessment of Qualcomm's overall conduct, Apple's antitrust defense is likely a lost cause except in a case where a patent couldn't be worked around within a reasonable time frame." You could learn more about the second report here.