While a patent troll in Finland suing Apple for patent infringement goes by the name of MPH Technologies OY today, they were once called "Mobility Patent Holdings Oy." So why are they considered a patent troll? While the U.S. Patent Office has MPH Technologies listed as the inventor of patent 8,346,949, a simple backwards check using USPTO's PAIR system (or, "Patent Application Information Retrieval" system) shows us that the patent was not originally owned by MPH but rather Intra Secure Networks OY who filed the patent in Europe back in 2003 under WO2003063443 as shown in the screenshot below from the World Intellectual Property Organization. 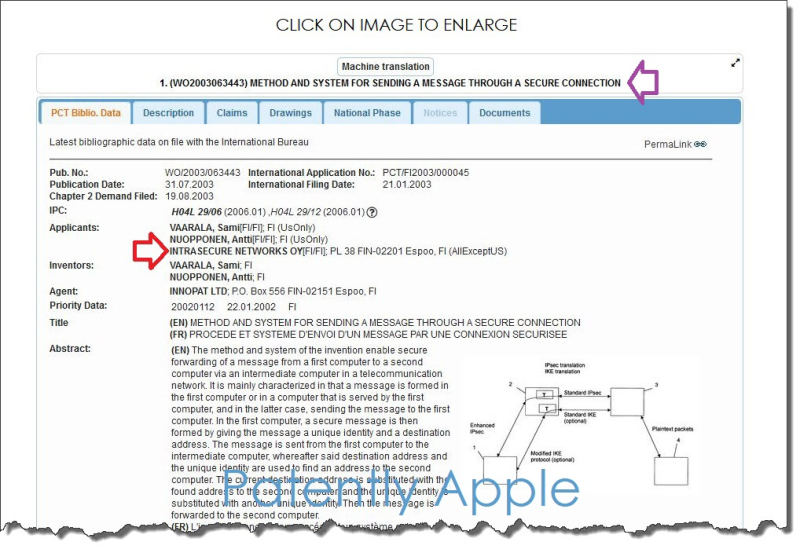 MPH Technologies is not listed on the original patent. They aren't the inventors. They simply changed the patent ownership to be seen on U.S. patents as though they were the originating company behind the invention. They were not. They simply acquired/paid for the patent. That's what Patent Trolls do. They acquire patents for the sole purpose of suing rich companies like Apple looking for a big pay day.

Apple knew that MPH Technologies was a patent troll explaining why they refused to deal with them when MPH demanded Apple pay them a licensing fee (pay them a ransom) for their (acquired) patents. MPH Technologies is claiming that Apple is infringing their acquired patents in products such as iMessage and FaceTime.

To learn more about this patent infringement case, review the full court filing below in a SCRIBD document provided to you courtesy of Patently Apple.

The patent infringement case presented in today's report was filed yesterday afternoon in the California Northern District Court. No Judge has been assigned this case at this time.