While the Solid State Battery is Five Years out, when it arrives it'll Rock the Automotive, Wearable & Portable Device Markets 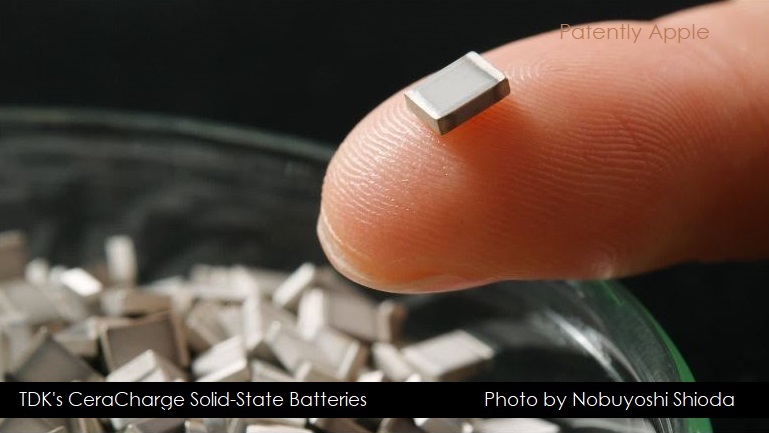 Two years ago Samsung Officially recalled the Note 7 smartphone due faulty batteries caused by "a battery cell issue." The reality is that Lithium-ion batteries using liquid electrolytes are volatile. Apple is on record, via patent filings, to have explored a battery alternative based on fuel cells. Apple won a patent for their fuel cell technology back in March of this year and then advanced their technology as presented in our June report covering a continuation patent. 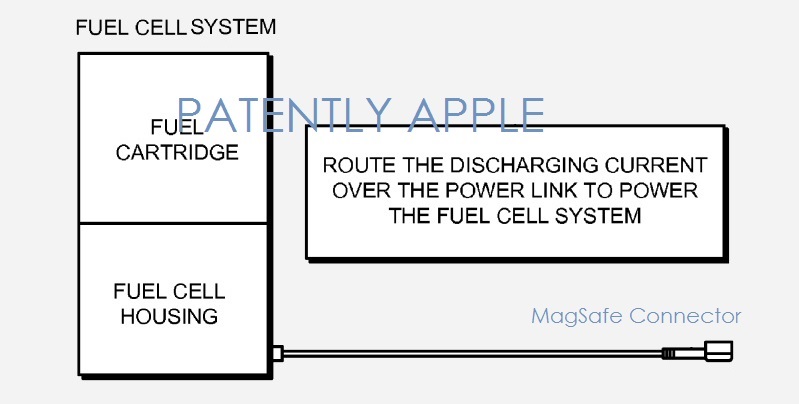 While Apple's TrueDepth camera introduced last year for iPhone X is great for Face ID, Animoji and Memoji, users would trade all that in for an all-week battery in a heartbeat. And while Samsung's new Note9 promotes their gigantic 4,000mAh as an all-day battery, it's still using a lithium-ion battery using volatile liquid electrolytes. 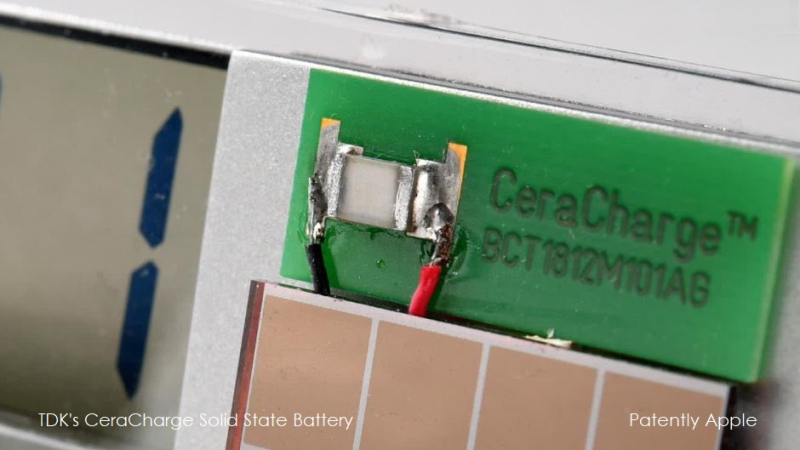 Are we getting any closer to breakthrough battery that will allow our iDevices to last a week? It appears such a solution is technically here right now and it's called the CeraCharge by TDK. The company's literature claims that it's the first solid-state rechargeable battery in SMD technology.

In contrast to most common technologies, CeraCharge is a solid-state rechargeable battery with no liquid electrolyte. The battery is based on a multilayer technology, similar to MLCCs. This means that a relatively high energy density and smallest volume are combined with the safety and high volume manufacturing benefits of ceramic multi-layer components. In addition, the use of a solid ceramic element as an electrolyte rules out the risk of fire, explosion, or leakage of liquid electrolyte.

To increase the capacity and the voltage, any number of individual CeraCharge components can be connected in series and parallel. This opens up a wide range of possible applications – particularly in devices intended for the Internet of Things. These include, for example, real-time clocks, Bluetooth beacons, wearables and systems for energy harvesting.

Whether Apple's R&D teams are considering solid-state batteries for a future Apple Watch is unknown at this time – but it certainly has potential.

One of the Nikkei Asian Review reports published today notes that "Last December, TDK began shipping samples of CeraCharge, a solid-state battery measuring just 4.5mm by 3.2mm by 1.1mm -- smaller than a grain of rice. The Japanese company says it can turn out up to 30,000 a month. "It is the world's first instance of practical application for a solid-state battery that can be incorporated into electric circuits," according to a TDK representative.

As the internet of things develops, demand for tiny, inexpensive batteries to power web-enabled devices is growing. Because CeraCharge batteries are so small, they allow greater flexibility in designing circuits, said Masahiro Oishi, who led the team that developed the product.

The company believes that with the assistance of the Japanese government and industry along with 15 Japanese Universities they'll be able to find next-gen manufacturing processes to enable mass production of these batteries for the auto industry in five years. Bloomberg thinks that solid-state batteries will be in 60 million vehicles by 2040. At the moment, the technology has been proven to last 2X longer than any other battery product."

On Monday a new report published by Materials Today covered new advancements in all-solid-state batteries which you could review here. The information came from the Tokyo Institute of Technology.

The report noted that "scientists and engineers believe that traditional Li-ion battery technology is already nearing its full potential and new types of batteries are needed," and that "solid-state batteries could revolutionize portable electronic devices and electric cars."

Here's to hoping that the "mass production" breakthrough solution comes to fruition as expected by the Japanese government. That would enable Japan to retain its leadership position in the battery market while finally delivering the all-week battery that all mobile users are dreaming of.