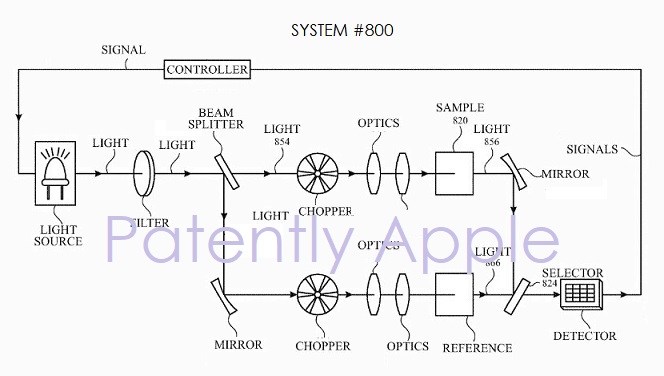 On this slow summer patent day without an interesting new invention to review, the U.S. Patent Office did publish a few "continuation patents" that are definitely worth noting. We covered the first two earlier this morning for of a next-gen iDevice cover and magnetic charging. The next one worth noting is one covering non-invasive blood glucose measuring using infrared absorption spectroscopy.

Apple is currently caught up in a five-count patent infringement lawsuit with Omni MedSci that we covered back in April where the company claimed that the Apple Watch was using their technology.

Drilling down into Omni's patents listed in the lawsuit, we found one (patent 9,885,698) titled "Near-infrared lasers for non-invasive monitoring of glucose," ketones, HbA1C, and other blood constituents. This is one that Apple is likely to battle out in court because they had been working on this technology themselves and today's continuation patent proves that out.

In April 2017 Patently Apple posted a report titled "Secret Apple Team Closing in on Diabetes Testing Breakthrough using an Apple Watch." That breakthrough is what's covered in today's continuation patent regarding a non-invasive method of measuring things like glucose via Absorption spectroscopy. 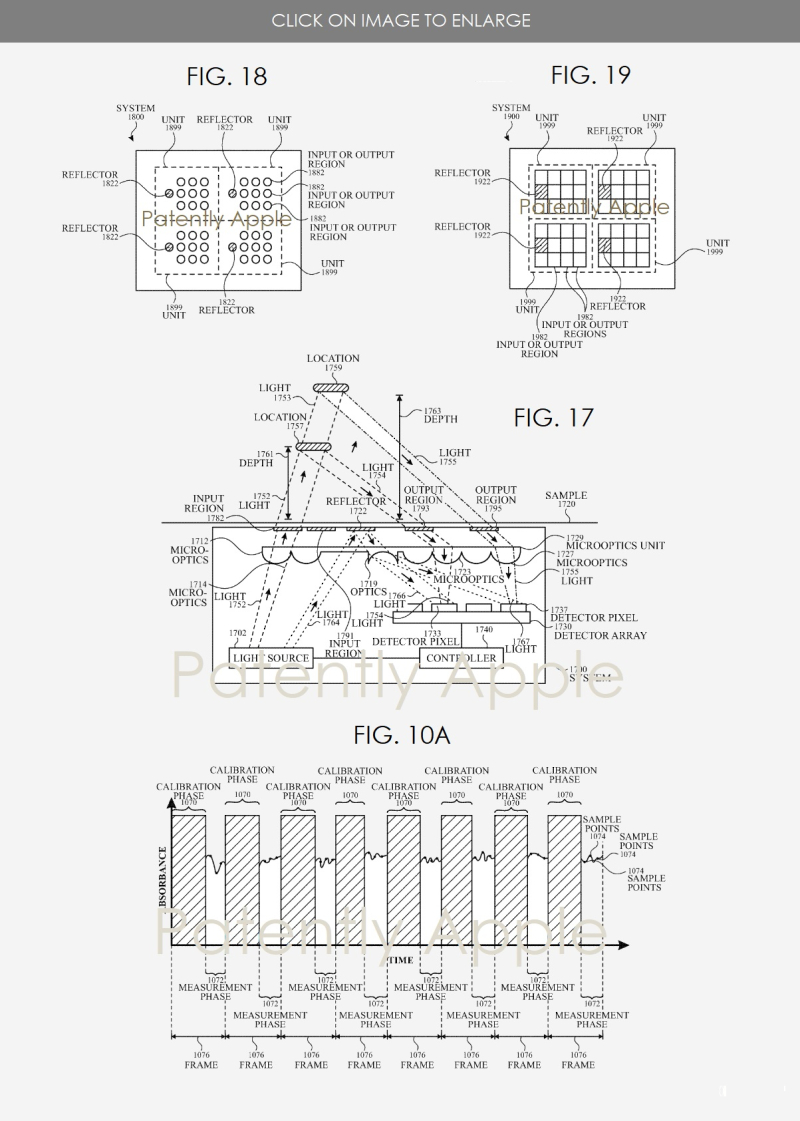 Apple's patent FIG. 10A above illustrates an exemplary plot of absorbance measurements used for determining the concentration and type a substance.

So what has changed or has been added to warrant the "continuation patent" filing? One thing: The "cancellation of Patent Claim #6. The original claim six covered the following:

"The system of claim 1, further comprising a filter, the filter including at least one of an acousto-optic tunable filter (AOTF), angle tunable narrow bandpass filter, or a plurality of sub-filters, each sub-filter having a different spectral range, located between the light source and the beamsplitter, the filter configured to select one or more discrete wavelengths from the one or more wavelengths of the first light emitted from the light source."

For engineers, those in the medical community or just those that are curious could check out Apple's continuation patent 20180238794 here. It's highly technical and one that we never covered before. The original patents for this seem to have been filed in Europe.

In my view, this could be a major patent if and when Apple brings this feature to market and a patent that might be used in their legal case with Omni MedSci.

Our cover graphic represents Apple's patent FIG. 8 which is an exemplary system comprising a modulator located between the light source and the sample for measuring the concentration and type of substance in a sample.

A few of the inventors listed include Robert Chen who was an Optoelectronics Scientist / Project Lead, Platform Architecture. He was developing emerging optical sensor technologies. Chen is now with Waymo as of May 2018; James Hillendahl, a Senior Optical Engineer who left in April for Jenoptik; and Michael Bishop, Engineer, Exploratory Design.