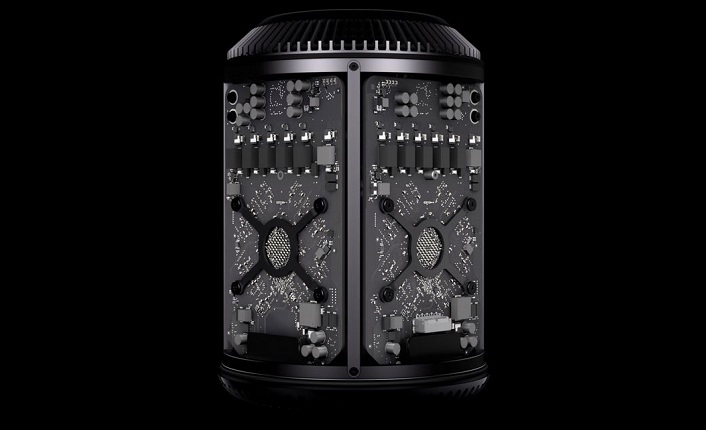 While Apple is preparing a new modular Mac desktop lineup of 2019, Apple is continuing to tweak their current Mac Pro patents. Apple was just granted a patent for the Mac Pro back in May and today we see that their engineers were already filing two continuation patents in June that were published today by the U.S. Patent Office. The continuation patents place emphasis on the thermals of Apple's Mac Pro tower.

In May's granted patent the first claim focused on the Mac Pro's "Radio Frequency Circuit. The patent noted that "a circular printed circuit board (PCB) having a circular active surface on which are mounted electronic circuits, wherein the circular active surface is centered at and perpendicular to the longitudinal axis and is located in proximity to and facing the first opening, wherein at least one of the electronic circuits is a radio frequency (RF) circuit.

In today's first continuation patent 20180246548 the focus of the first patent claim changes to "acoustic output." In patent claim # 1 Apple adds the following: … "a printed circuit board (PCB) that is positioned within the internal volume such that the PCB is offset from and parallel to the longitudinal axis, the PCB having an active surface on which are mounted electronic circuits such that the electronic circuits are located in proximity to the second opening and facing the first opening, and an air moving component in communication with the PCB and capable of moving air in a controlled manner towards the first opening, wherein the moving air provides the acoustic output.

The term acoustic or acoustic output is mentioned 10 times and completely absent in Apple's May granted patent. Review the added patent claims in full here. The mention of "acoustic output" is added an additional 6 times in the second continuation patent 20180246547 that you could review here. 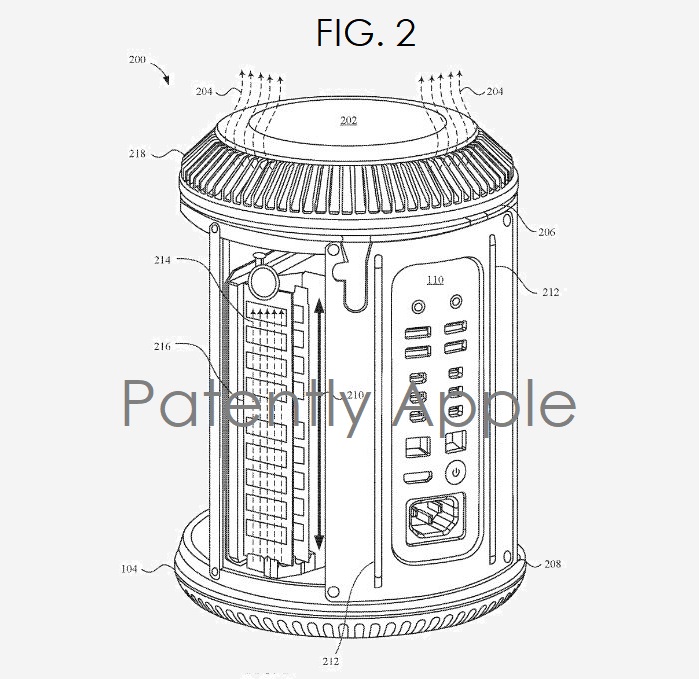 Apple's patent point #50 is where acoustic output is put into context of thermals. Apple notes that "A thermal management system can utilize an air mover that can be move copious amounts of air axially through an interior volume defined by the housing that can be used to cool a central core of the compact computing system in a manner that is both efficient and quiet.

For example, in response to an increase in demand for processing resources from either or both the CPU and/or GPU, the air mover can increase the airflow from about 15-20 CFM to about 25-30 CFM (at about room temperature of 25.degree. C.) with an acoustic output of about 35 dbA (it should be noted that these acoustic levels are only experienced when the air mover is performing at a higher end of its operating range during a period of high demand and not during more normal operation). It should be noted that at higher ambient temperature (35.degree. C.), the air mover can ramp the airflow even further to compensate for the reduced thermal transfer at the higher ambient temperature. In this situation, the air mover can ramp the airflow to about 35 to 40 CFM or more having a higher acoustic output of 40 dbA or more."