In April Patently Apple posted a report titled "Next-Gen Foldable and Scrollable Smartphones will ultimately blur the line between Phones and Tablets." In May we posted a report about Huawei aiming to release their first foldable smartphone in November and earlier this week we reported that Samsung had officially started to ramp up their talk of their first foldable smartphone arriving sometime in 2019.

With future foldable smartphones gaining momentum in the press, it's no surprise to find the U.S. Patent and Trademark Office publish yet another patent application from Apple regarding a "foldable cover and display," for a smartphone and beyond

The foldable electronic device may also be used in a folded configuration, which may have a more compact size and may also provide a smaller display area.

In some cases, the electronic device can be partially or wholly unfolded to adjust the size of the viewable display area.

In my humble opinion, it may be that the multiple folded devices described above by Apple could apply to a future iPad – more than an iPhone. 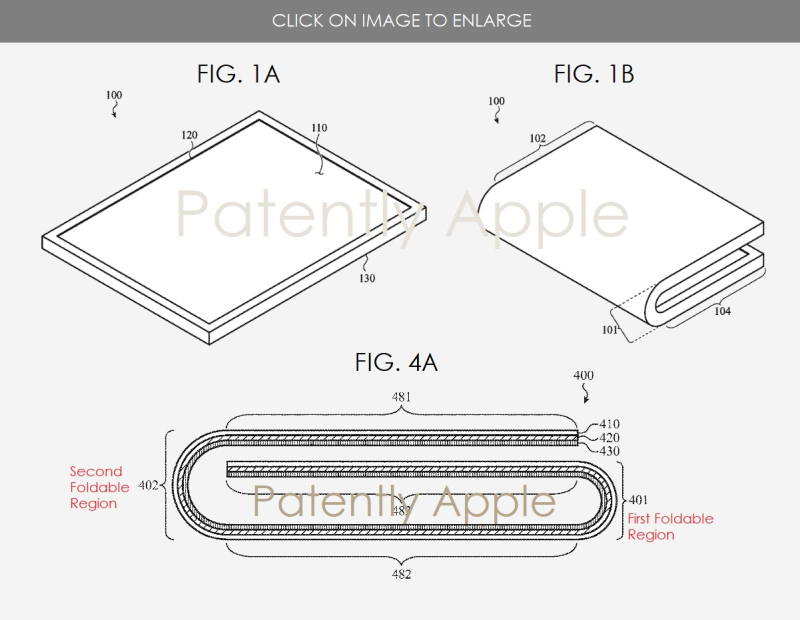 The display layer is also viewable along the first and second foldable regions #401, #402 of the device. The cover layer #410 is on the exterior of all regions of the device except third region #483. 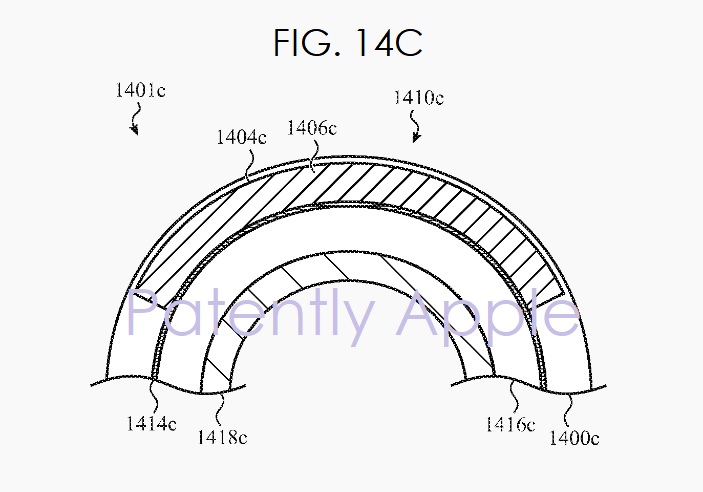 The features may include an array of cuts or reliefs having a shape that is configured to facilitate a particular bend or living hinge. The cuts or reliefs that are formed into the cover sheet may be filled with a more flexible or pliable material that is optically index matched to the substrate or glass of the cover sheet.

In some embodiments, a relief feature may be characterized by one or more dimensions such as a width or a depth.

Apple later notes in their patent filing that there would be other features of the electronic device with a bendable or flexible cover layer, such as a flexible display, a flexible circuit board, a flexible battery and more.

Lastly, Apple notes that the foldable device may also include one or more sensors, such as a force sensor, a capacitive sensor, an accelerometer, a barometer, a gyroscope, a proximity sensor, a light sensor, or the like. The sensors may be operably coupled to processing circuitry. In some embodiments, the sensors may detect deformation and/or changes in configuration of the electronic device and be operably coupled to processing circuitry which controls the display based on the sensor signals.

In some implementations, output from the sensors is used to reconfigure the display output to correspond to an orientation or folded/unfolded configuration or state of the device.

Example sensors for this purpose include accelerometers, gyroscopes, magnetometers, and other similar types of position/orientation sensing devices. In addition, the sensors may include a microphone, acoustic sensor, light sensor, optical facial recognition sensor, or other types of sensing device.

Apple's patent application 20180217639 was filed back in January 2018 and published today by USPTO. Considering that this is a patent application, the timing of such a product to market is unknown at this time.

One of the inventors on the patent is Dale Memering, Manager of Product Design Materials.