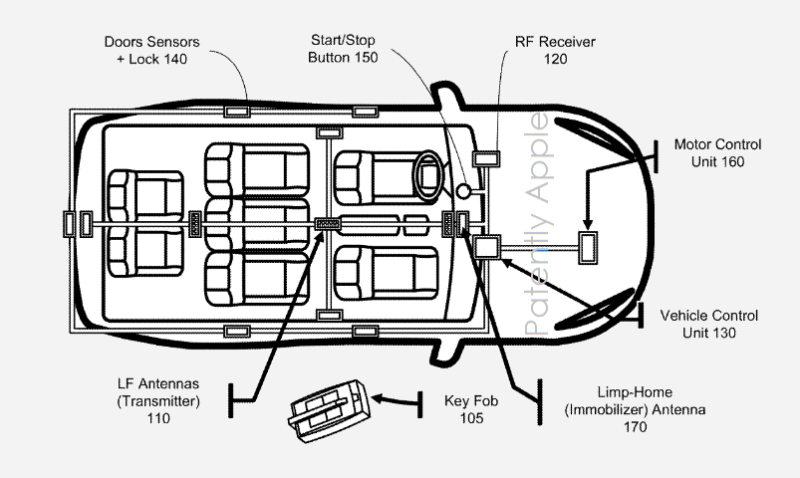 Today the US Patent & Trademark Office published a patent application from Apple that relates to an enhanced automotive passive entry system. The patent makes no mention that it applies to autonomous vehicles which is interesting. The system could use an iPhone, Apple Watch or other wearable device to lock and unlock vehicles doors, open the trunk, start the vehicle and may support an in-vehicle wireless charging system for Apple devices. Apple also notes that to authenticate the fob in relation to a vehicle, it will utilize encryption to foil hackers. Lastly, a unique aspect to the system is that it uses machine learning.

The key fob can be bulky and be an additional item that a user must carry. Further, the magnetic fields are short range, and current techniques are susceptible to hackers, which can allow a thief to access the car and potentially steal it. Apple's invention is to overcome these problems.

Apple's invention covers methods and devices for allowing a mobile device (e.g., a key fob or a consumer electronic device, such as an iPhone, Apple Watch or other wearable device) to interact with a vehicle such that a location of the mobile device can be determined by the vehicle, thereby enabling certain functionality of the vehicle.

According to one embodiment, the mobile device and the vehicle can include radiofrequency (RF) antenna(s) and magnetic antenna(s). The mobile device can measure signal properties of the RF signals and the magnetic signals from the vehicle that relate to a distance of the device's antenna from a vehicle antenna.

According to another embodiment, signal values measured from one or more antennas (e.g., RF or magnetic) can be used with a machine learning model to classify a location of the mobile device as being within one of a set of regions.

Apple's patent FIG. 1 below shows a vehicle with an LF location system; FIG. 2 shows the internals of a key fob. 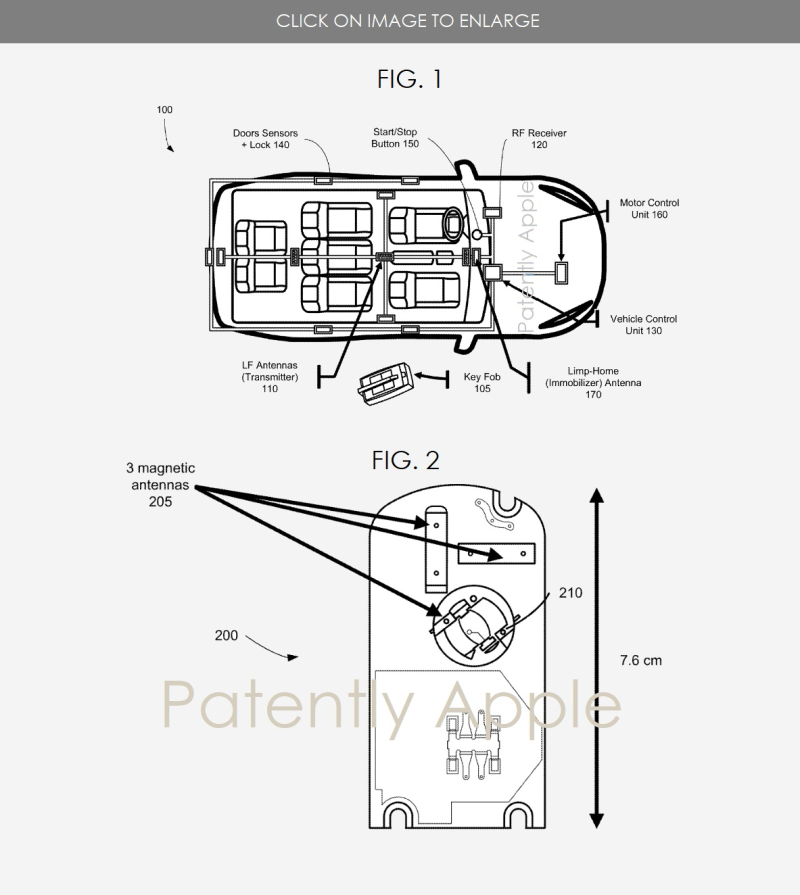 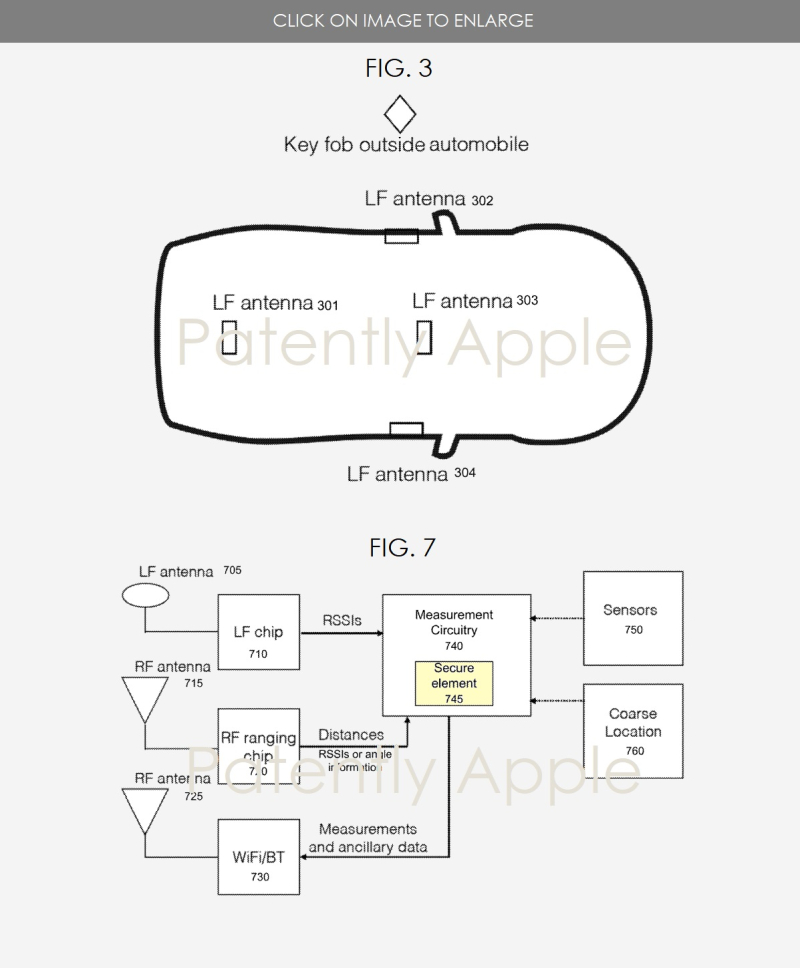 Apple's patent FIG. 9 below shows a region-based passive entry/passive start automotive system; FIG. 11 shows an implementation of the machine-learning model for identifying which region a mobile device is located relative to a vehicle. 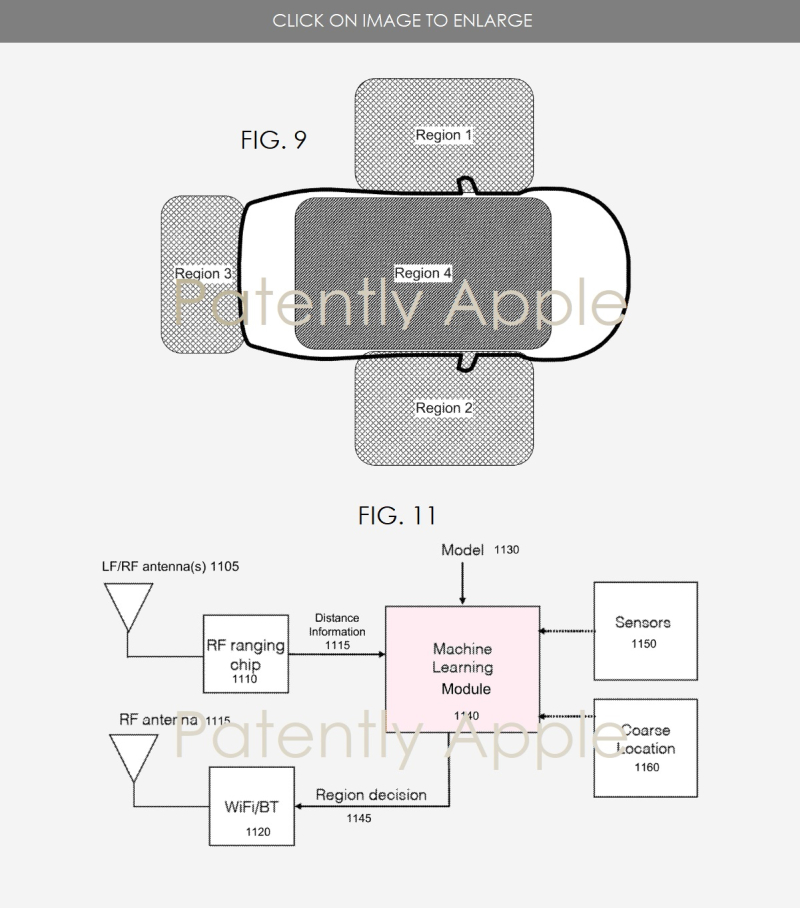 Random Points in the Patent Application

Another improvement to user experience can be to detect the user's intent when approaching or leaving the automobile, e.g., the user approaching the automobile likely has the intent to unlock the vehicle if the vehicle is currently locked. Additionally, as the user approaches the automobile, the automobile can turn on the interior lights, enable the heating system, and unlock the doors or trunk, without requiring physical interaction and doing so securely. Such longer range intent can be achieved as the power of RF signals decays as l/r.sup.2. Another improvement can be to reduce the susceptibility of an LF magnetic man-in-the-middle attack.

Apple hints that antenna system in the vehicle may allow smartphones with charging coils, like the iPhone 8, iPhone X and beyond to be recharged. In addition, Apple notes that "additional coils can be added to the mobile device to provide full 3-D functionality, or the automobile's existing LF antennas can be augmented with additional antennas to generate magnetic fields in three orthogonal directions."