Earlier this month Patently Apple posted a report titled In-Display Fingerprint Scanners to Enjoy a Huge Boost in 2019." In late July our Patently Mobile blog posted a report titled "Samsung's Ultrasonic based Fingerprint Scanner for under a Smartphone Display was confirmed in a Patent this week." Today it was confirmed in a Korean report that Samsung is set to lead the way with in-display fingerprint ID starting with their Galaxy S10 being introduced at the end of February 2019.

The report notes that "a smartphone's fingerprint scanner integrated into a physical button will likely be a thing of the past as Samsung Electronics is expected to have a fingerprint sensor built in the screen for its next Galaxy S flagship lineup in 2019.

Samsung is preparing to adopt the biometric technology that allows users to scan their fingerprints on the screen for all the three variants of the 10th edition of Galaxy S. A source from the display industry confirmed that "The two high-end Galaxy S models will come fitted with an ultrasonic in-screen fingerprint scanner while the other one will house an optical fingerprint sensor beneath the screen." 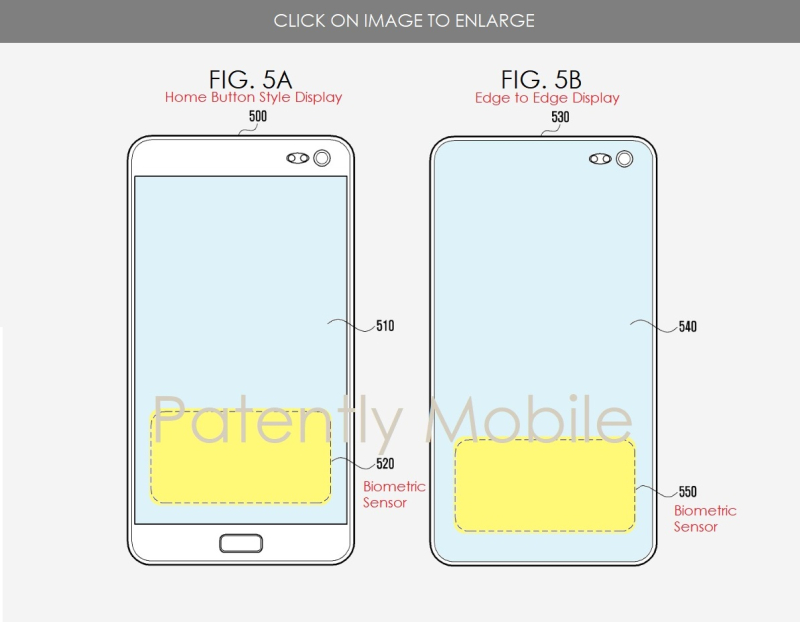 The ultrasonic fingerprint technology creates a 3D mapped fingerprint instead of a flat image used by an optical scanner--the most-used fingerprint scanner types for high-end smartphones. Patently Apple covered an Apple patent on this very technology earlier this month in a report titled "Apple invents a new Approach to Touch ID by using Multiple Cameras under the Display to capture 3D Fingerprint Data."

The Korean report further noted that the ultrasonic scanner boasts more accuracy than the traditional ones as it is not affected by grease, sweat, or light.

An optical sensor, which is around three times cheaper than the ultrasound sensor, works like a digital camera, capturing a two dimensional image of fingerprint. It is considered relatively easy to spoof as it makes use of a 2D image to authenticate users, and its accuracy rate tends to decrease if the finger being scanned is dirty, too wet or dry and external lights get in the way.

Analysts forecast the in-screen fingerprint scanner could serve as a trigger for a landscape change in the overall smartphone market in 2019."

With the industry unable to match Apple's biometrics for Face ID quality, the next best thing will be in-display fingerprint ID. Should this feature prove popular with consumers and developers, we know that Apple has the patents for this technology and could introduce it rather quickly as a secondary biometric option.