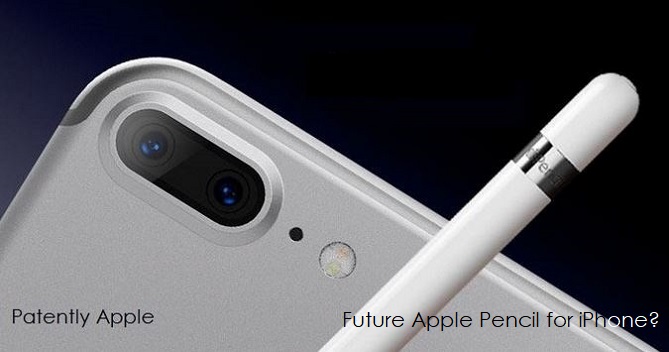 Patently Apple was first to report last week that TrendForce had taken a Leap by claiming that Apple Pencil would be an option for new 2018 iPhones. While we've been reporting on such a possible development in the future via Apple patents (One and Two), you could never forecast the timing of a product to market based on patents.

At the moment I'm not sure that the report is really a rumor. It sounds more like the article is reflecting past news. The report translated states that "Industry insiders pointed out that the touch-enabled electronic terminal products equipped with stylus is a "reasonable configuration." That doesn't sound definitive in any way.

At another point at the end of the report it notes: "Even if the phone is equipped with the stylus chip." Again, I think the article is just excited about the prospects of an Apple Pencil working with the iPhone as it would be good news for Taiwan's IC suppliers.

On the flip side, MacRumors thinks that this is a solid rumor and for that reason alone we're covering this story as rumors is their specialty.

While the eventual move by Apple to support Apple Pencil for any iPhone would be another hammer in Samsung's face, it's just the timing that's still in question.

The one minor advantage that Samsung held in the smartphone arena would evaporate rather quickly. The Economic Daily News article does make a valid point that should Apple make that leap, the whole industry would run to copy them – which would virtually wipe out Samsung's Note lineup advantage in any market in short order.

Perhaps this is why Samsung is now preparing to launch the world's first dual display smartphone. They may want to quickly replace the volume carved out by the Note smartphone that could erode with a move by Apple and others to support pens for smartphones going forward.

Will this be the year that Apple Pencil comes to the iPhone? Only time will tell.