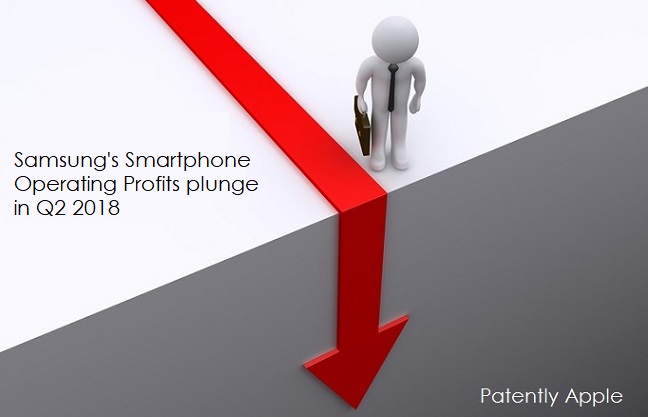 The Nikkei Asian Review reports that "Samsung Electronics stumbled to a decline in second-quarter earnings as the world's largest smartphone maker struggled to mount a comeback in China, where local competitors continue to gain market share.

The decline was deeper in the company's information technology and communications division, which focuses on smartphones. The division's operating profit tumbled 29.2% on the quarter to 2.7 trillion won as sales of the latest flagship smartphone model, the Galaxy S9, proved disappointing.

Samsung's presence in the Chinese smartphone market has nearly faded out. Its once double-digit share in this key battleground hit 1% in the first quarter, down from 3% a year earlier and 8% in the first quarter of 2016, data from Counterpoint Technology Market Research shows. 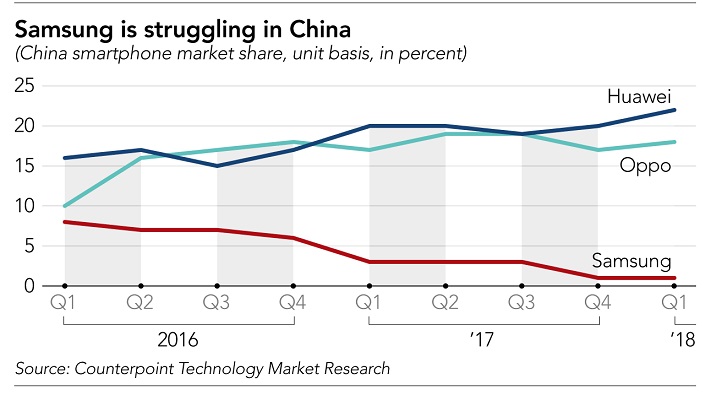 In contrast, Chinese rival Huawei expanded its market share to 22% in the January-March period, up from 20% in the first quarter of 2017 and 16% two years ago. Fellow Chinese player Oppo's share grew to 18% for the first three months of this year from 17% last year and 10% two years ago.

Samsung's answer hinges on what it sees as a game changer. The company plans to release a foldable smartphone early next year, possibly the first of its kind, to celebrate the 10th anniversary of the Galaxy series.

On Tuesday, the company said that it is optimizing software and services for the new model to satisfy consumer expectations for a foldable phone, as well as increasing durability of the display and battery.

'We expect this to be a catalyst for the sluggish mobile market,' said Lee Kyung-tae, an executive for the company's mobile business, during an earnings conference call. 'After the product is ready, we will hold an event to announce the launch schedule.'

Lee admitted that Samsung has faced numerous challenges while developing the foldable device. He said the last few years have been spent studying solutions for the display and battery case, along with examining possible user scenarios.

Samsung's foldable device, expected to be named Galaxy X, would feature a 7.3-inch seamless display and be no thicker than an iPhone 8 or iPhone 8 Plus, said a source familiar with the matter. 'In durability testing it could be folded 20,000 times, and the price will likely be between $1,500 and $2,000,' the source said."

At the steep price range of US$1,500 to – $2,000 it's clear that Samsung doesn't envision the folding smartphone being a serious volume category. While Samsung is playing up the folding phone because of their bad quarter, the fact is that their competitor Huawei is likely to launch a folding smartphone first next quarter. 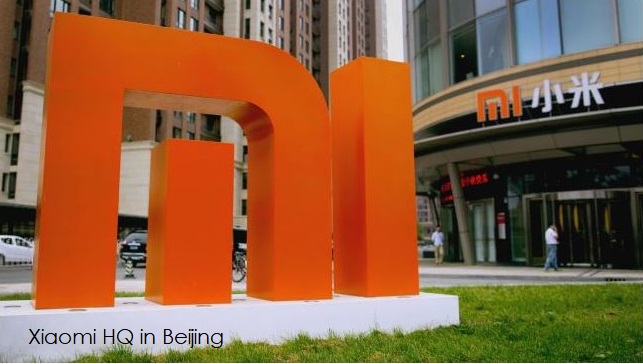 In addition, Samsung's Chinese rivals are currently in talks with Korean part makers so that they too could jump into the foldable smartphone market. ET News reported yesterday that "with the pending debut of Samsung Electronics' first foldable phone, Chinese handset makers Xiaomi and Oppo are having a series of meetings with Korean parts makers aiming to launch their own versions as early as next year.

While Samsung and China's largest handset maker Huawei are competing to launch the world's first foldable smartphone, smaller Chinese rivals are jumping into the nascent market to take an early edge.

Unlike Samsung and Huawei which are considering in-folding type phones with larger screens, Xiaomi is said to be working on a smaller out-folding type. The folding type is largely dependent on the panel size. Little information is available on Oppo's folding phone project.

The key part is the panel. Samsung and Huawei have teamed up with Samsung Display and China's BOE, respectively. Xiaomi and Oppo are also likely to secure panels from Chinese makers, with Korea's LG Display seeking to share the orders."

While Apple has several folding smartphone patents on record (01, 02, 03, 04 and more), it is highly expected that they'll play it safe and allow their competitors to work out first generation problems before entering this smartphone category.

For the record, Apple reports their FY 18 Third Quarter Results later this afternoon.