The U.S. Patent Office has Granted Samsung a Patent for a Biometric Camera that could be used in 2019 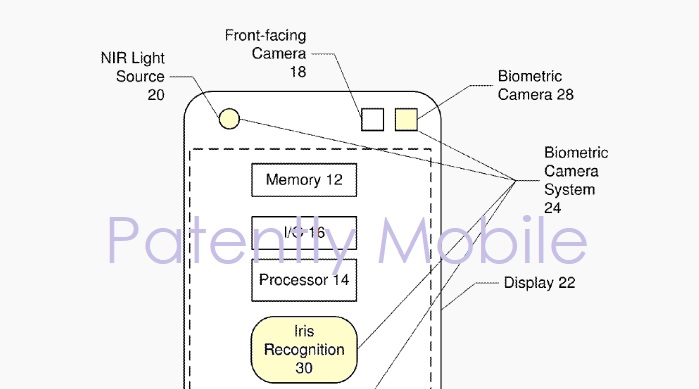 Apple's iPhone X introduced Face ID and their all-new specialized TrueDepth camera that could sense 3D imagery. While no other smartphone has been able to duplicate Apple's new feature, it was rumored back in March that Samsung was working on a 3D sensing camera, possible for the Galaxy S10 smartphone due in early 2019.

Even though Samsung initially downplayed Apple's breakthrough feature that was superior to their own Iris scanning software, the fact is that they had filed a patent in 2014 covering 3D sensing for facial recognition that was granted in late Q2 of this year. So the rumor that Samsung is working on such a smartphone feature is definitely supported technologically by the presence of this patent that was ahead of Apple's Face ID. Samsung will be able to claim that they're technically not copycatting Apple's Face ID, even if it's late to market.

Samsung notes in their patent background that various camera systems exist to capture images of the iris. In particular, there is interest in providing a biometric camera system that can be realized in a mobile device such as a smartphone or tablet. Such biometric camera systems face a number of challenges during their operation, including 1) ambient illumination (e.g. be able to operate in full sunlight); 2) motion blur (e.g. user's hand shaking while holding the smartphone and capturing iris); 3) depth of field at close distances (e.g. while taking pictures at short ("macro") distances, the object being further or closer than the focused distance makes the image blurry); 4) additional cost and additional space for a biometric sensor; and 5) limited field of view (e.g., the camera must capture a high-resolution image of the iris for reliable identification. Since the iris is small--e.g. 12 mm in diameter--while the distance between the camera and the iris is considerable--e.g. arm's length, .about.25 cm--the camera must be considerably "zoomed in" on the face and iris area, rather than image the user and his/her surroundings as in a wide-angled shot).

Therefore, a need exists to provide a biometric camera system that is capable of addressing the above issues.

Samsung's granted patent / invention covers a biometric camera system for a mobile device that includes a near infrared (NIR) light source on the mobile device that flashes a user of the mobile device with near infrared light during image capture; a biometric camera located on the mobile device offset from the NIR light source, the biometric camera comprising: an extended depth of field (EDOF) imaging lens; a bandpass filter located adjacent to the EDOF imaging lens to reject ambient light during image capture; and an imaging sensor located adjacent the bandpass filter that converts an optical image of an object into an electronic signal for image processing; and a processor configured to receive video images of an iris of a user from the image sensor, and attempt to match the video images of the iris with previously registered images stored in an iris database, wherein if a match is found, the user is authenticated.

Samsung's patent FIG. 1 presented below illustrates a block diagram illustrating an exemplary embodiment of a mobile device biometric camera system. The camera system could apply to a smartphone, tablet, television, notebook or desktop. 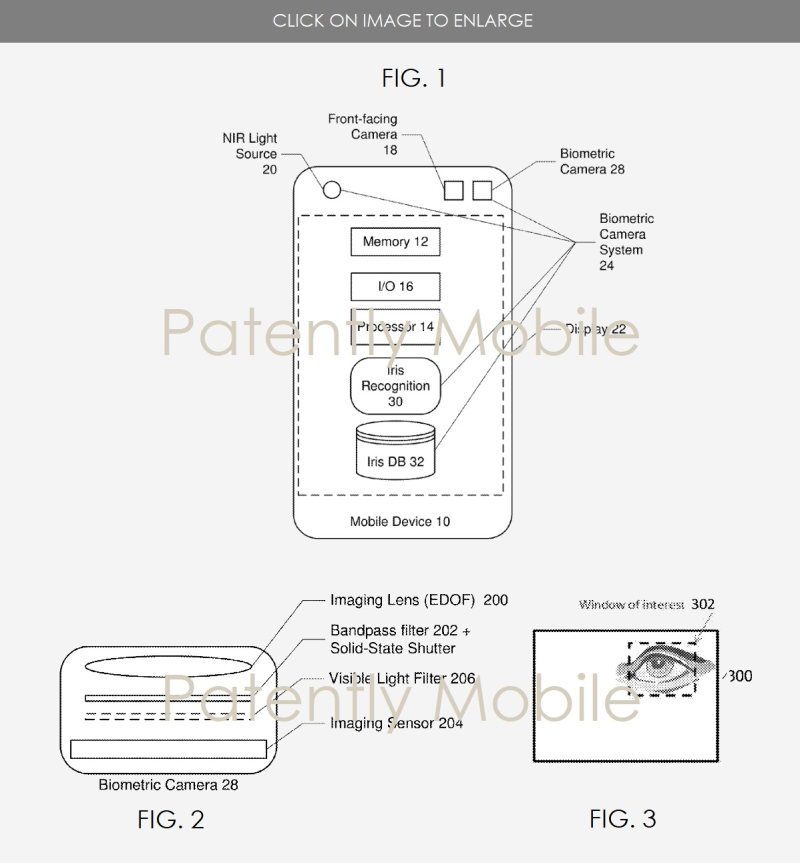 Additionally, Samsung states that their biometric camera could optionally perform functions including proximity sensing, night-vision camera, 3D time-of-flight sensor, eye position and gaze tracking camera, and structured light for 3D sensing. Combined with a user-facing front-face camera, the system is able to automatically identify whether the left and/or right eye is being imaged.

Some of Samsung's top engineers were listed on the patent as inventors including Mr. Ovsiannikov, VP at Samsung Semiconductor; Ms. Wang, Senior Director, 2D/3D Imaging; and Mr. Smits, VP of Samsung Electronics in the Bay Area.