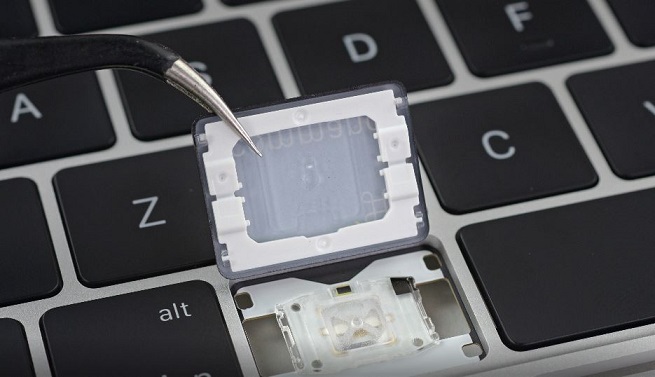 After a petition from Change.org was made public concerning serious problems with MacBook Keyboards using the butterfly key design followed by three class actions against Apple for the faulty keyboards Apple finally announced a keyboard service program. Last week iFixit slammed Apple in a report titled "Apple Engineers it's own Downfall with the MacBook Pro Keyboard."

The iFixit report noted that "Unlike the rest of the tech media, we don't judge products for their release-day usability or aesthetics—we focus on what will happen when the device (inevitably) fails.

In our eyes, the new design was a repairability flop. We downgraded Apple from a seven-out-of-ten to a two. The subsequent 2013 update sent the MacBook line into a freefall, earning a mere 1/10—the lowest a notebook had ever earned at that point. They haven't recovered since.

The basic flaw is that these ultra-thin keys are easily paralyzed by particulate matter. Dust can block the keycap from pressing the switch, or disable the return mechanism.

The keyboard itself can't simply be swapped out. You can't even swap out the upper case containing the keyboard on its own. You also have to replace the glued-in battery, trackpad, and speakers at the same time. For Apple's service team, the entire upper half of the laptop is a single component. That's why Apple has been charging through the nose and taking forever on these repairs.

The rest of the report walks you through the problems of the butterfly keyboard, and while the author hopes that Apple gets their act together in future MacBooks, Kyle Wiens thinks that Apple fans should give Dell and HP laptops a shot. Wiens writes: "I think they've done more to earn your business than Apple has." You could read the full iFixit report here.

While for most Apple fans switching to a Windows laptop isn't an option, there are millions of fans who came from the Windows world prior to switching to Macs. For those fans, switching back to Windows PC temporarily is a real option until MacBook Pro engineers reinvent its keyboard.

MacBook Pro fan Chance Miller from 9to5Mac wrote back in June: "It's hard to view Apple's repair program as a huge win for people who experience problems from the MacBook keyboard design. Instead, it feels a lot more like a band-aid that comes from a company reluctant to admit its faults, facing countless lawsuits on the matter."

Usually when class actions are filed you can smell people jumping in for the money, period. In this case, the class actions were supported by many long standing Apple bloggers who first brought the issue to light.

Here's to hoping that Apple's MacBook Pro service program isn't just a band-aid and proves to be more beneficial than their iPhone battery replacement program was. I replaced my battery two weeks ago and the performance of my iPhone 6 didn't change whatsoever. It's like they never really changed the battery at all.