It's being reported today that China's smartphone vendor Huawei is set to release the world's first 5G-enabled smartphone in June 2019, its supply chain partners have been gradually finalized, with Taiwan-based Auras Technology reportedly to serve as the sole supplier of cooling modules for the new smartphone model, according to industry sources.

The sources said that Auras is slated to start volume production of cooling modules, mainly heat dissipation copper sheets, in September after kicking off trial production in late July.

Auras didn't comment on the sources' revelation. But its chairman YS Lin did said earlier that 5G will usher in a new wave of high-performance thermal solution adoption by brand smartphones, as the transmission speed of 5G will be over 10 times that of 4G and ever-higher film resolutions will be required.

Industry sources said that Huawei will adopt 0.4mm heat dissipation copper sheets in the cooling modules, and Auras will have no problem conducting volume production of such modules as the company started to apply the modules to smartphones two years ago.

Huawei's rotating CEO Eric Xu said that the computing performance capability of 5G chips will be over five times better than the existing 4G chips, with power consumption some 2.5 times higher. He added that the ensuing heat dissipation is also a significant problem that must be tackled, in addition to the R&D of power-saving solutions.

Huawei, now next to Samsung and Apple in the global smartphone market ranking, aims to advance to top-2 in the next 1-2 years. And sales performance of the 5G smartphone model to be launched by Huawei in June 2019 will determine whether the China vendor can achieve that goal. The company's monthly shipment volume for the new model is estimated at 300,000 units initially.

Apple began researching / designing a cooling system for the iPhone back in 2011 as presented in our 2012 patent report here. 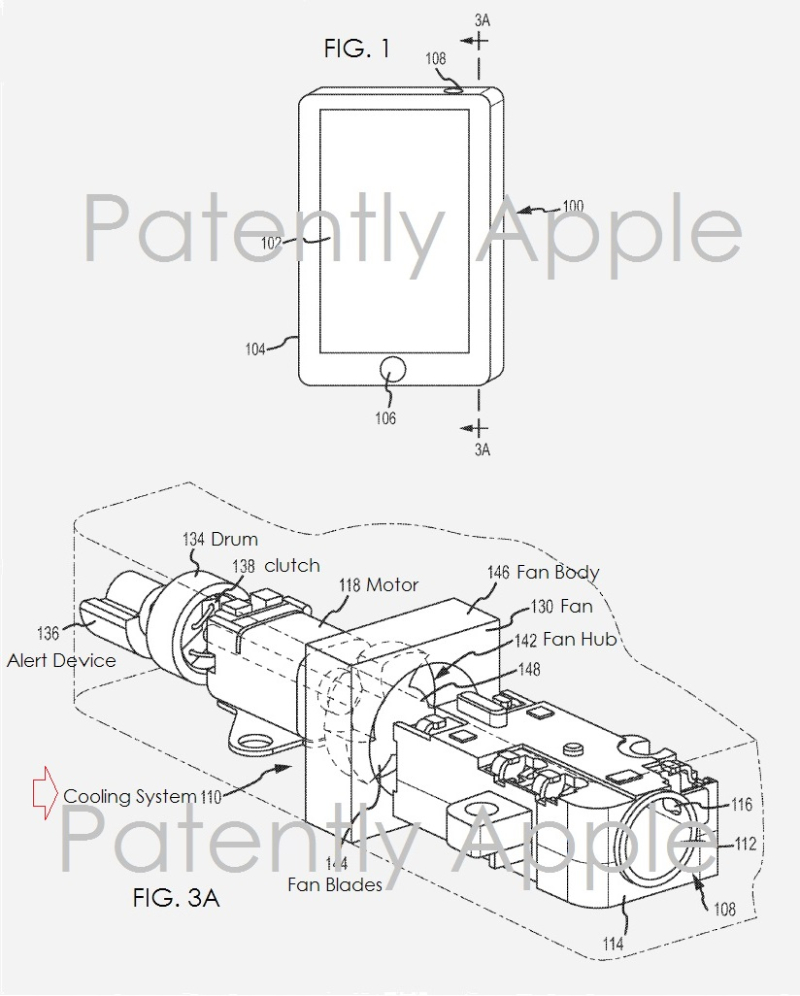 Apple's patent FIG. 6A is a front elevation view of a drum operably associated with a clutch of the cooling system. With the demands of 5G speeds, it's unknown if Apple's earlier design will suffice, but at least we know that Apple has an engineering team working on thermal solutions.